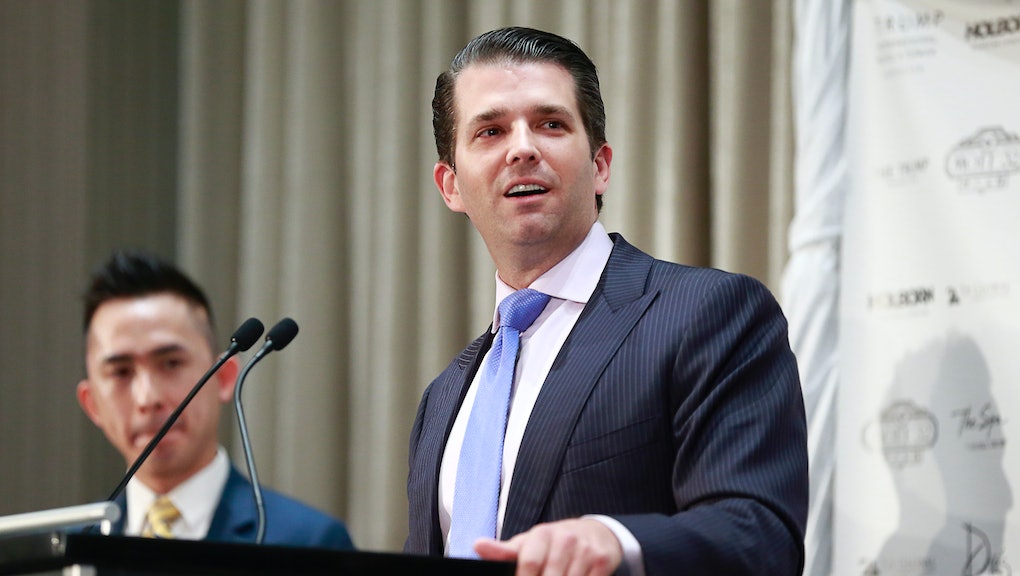 The National Rifle Association has found a natural ally in its quest to loosen restrictions on suppressors (called "silencers" by gun control advocates, despite the fact that they don't actually prevent all noise). That ally is the president's son, Donald Trump, Jr.

Rep. Jeff Duncan (R-SC) and Sen. Mike Crapo (R-ID) introduced bills in the House and Senate, both called the Hearing Protection Act of 2017, in January. The bills would eliminate the $200 transfer tax on silencers, give refunds those who bought silencers after October 22, 2015, and preempt state and local laws that regulate silencers. The Senate bill was referred to the Finance committee in January, while the House version was sent to the Subcommittee on Crime, Terrorism, Homeland Security and Investigations in February.

The bill takes its name due to the hearing damage unsilenced gun can cause. A 2014 report by the Centers for Disease Control and Prevention found shooters at outdoor and indoor gun ranges were regularly exposed to sounds in excess of 150 decibels. Sounds of greater than 140 decibels can cause permanent damage to the eardrums, the CDC says.

“Many gun owners and sportsmen suffer severe hearing loss after years of shooting, and yet the tool necessary to reduce such loss is onerously regulated and taxed. It doesn’t make any sense,” Chris Cox, executive director at the NRA, said in a statement.

"It's about safety," Donald Trump Jr. said in a promotional video for SilencerCo., a company that makes silencers for pistols, shotguns, rifles and other weapons. "It's about hearing protection. It's a health issue, frankly, for me."

Trump Jr. also said his father would sign the bill if it makes its way through congress. "If you line up those votes, he's obviously going to be for it," he said.

Under the National Firearms Act of 1934, buying a silencer is more onerous than buying a gun. Unlike with guns, which can be purchased in minutes, silencers can require a wait of up to a year to buy. In 2015, SilencerCo, the same company that produced the video with Trump Jr., began offering legal help for those seeking to purchase its silencers in exchange for a $130 fee.

Gun control advocates oppose the bill. "This legislation is nothing more than a transparent giveaway to the gun industry to help sell more silencers and increase profits," Chelsea Parsons, a vice president of guns and crime policy at the Center for American Progress, told McClatchy.

Others say silencers could make their ways into the hands of violent criminals and that, during shootings, the loud sound of gunfire tells bystanders to run. But backers of the bill say silencers don't actually silence.