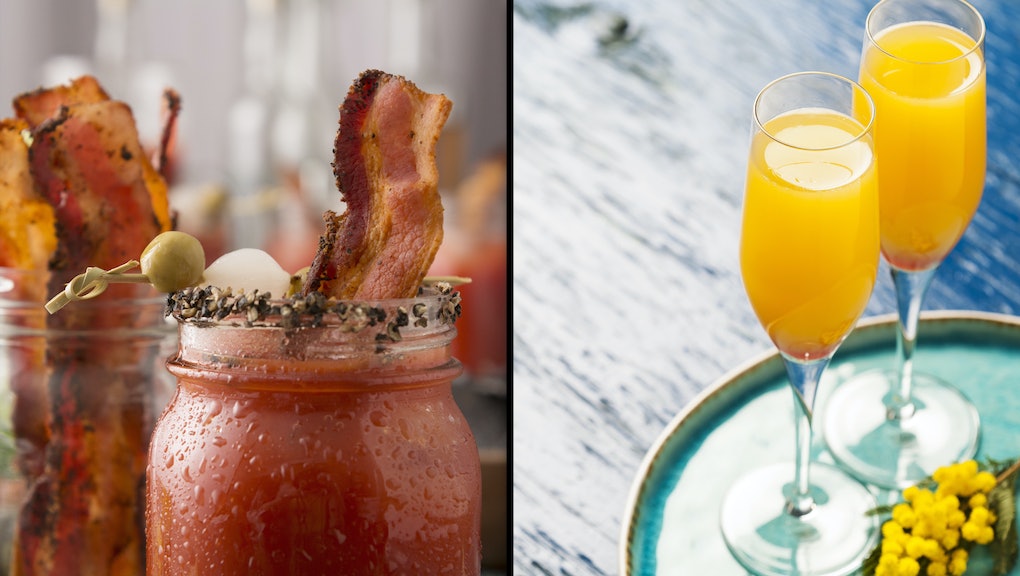 Bloody Mary vs. Mimosa? Settling brunch's oldest debate once and for all.

Look, I'm not trying to tell you how to do brunch. Get the pancakes, get the eggs Benedict (but not the surf and turf option because that always disappoints), get the yogurt parfait for all I care (seriously, though?).

But when it comes to your brunch beverage, I beg you to nix the mimosa from your order. The bloody mary reigns far superior to orange juice-diluted Champagne for reasons that go way beyond taste (but that's a reason, too).

First, a mimosa at home is the same as a mimosa out

Let's start with the ingredients. If you're going out to brunch, that's a treat, and you best treat yourself with something that can't be found in your kitchen at a much lesser cost. A traditional mimosa calls for three parts Champagne, one part orange juice. Cool. A very basic bloody mary, on the other hand, is made with vodka, tomato juice, lemon juice, horseradish, salt, pepper, Tabasco, lemon wedges and — let's be real — at the very least, some celery stalks. That's nine ingredients to the mimosa's two, the latter of which many people will have stored at home.

Mimosas have no health benefits — and will make you feel horrible

As for the nutrition of all those ingredients, the spices and mixtures that make up a bloody mary fare much better than the two liquids in a mimosa. "While both drinks have around the same number of calories, bloody marys have less sugar than mimosas," Alissa Rumsey, registered dietitian and owner of Alissa Rumsey Nutrition and Wellness, said in an email.

Even if you're not out brunching to be healthful, the sugary stuff in mimosas can make you feel real shitty. "The combo of orange juice and Champagne can cause a higher spike in blood sugar and more insulin will be released," Rumsey said. That rush of sugar to your system might lead to headaches, fatigue, increased thirst and trouble concentrating. If you're drinking at brunch in the first place, chances are it's because you're trying to feel less bad from drinking the night before. That sugar spike from your little mimosa isn't doing your hangover any favors.

Worse, you're going to suck that mimosa straight down because you're thirsty, you're in search of something to fill your stomach and you're simply no match for the orangey sweetness tempting your taste buds.

"Because mimosas are sweeter, they tend to go down easier," Rumsey said. If you're feeling extra loose, you'll probably order another, another and then some more, which could lead to some even more costly or irresponsible decisions later on in the day. More mimosas, more money, more problems.

Bloody marys, dare I say, offer a handful of health benefits. "[Bloody marys] always have a hefty dash of Tabasco, which is packed with a spicy compound called capsaicin that may boost your metabolism," Alexis Joseph, a registered dietitian, co-founder of Alchemy Juice Bar and Cafe and founder of the blog Hummusapien. "Another kick of heat comes from horseradish, a pungent root related to mustard that has been used medicinally in disease prevention for many years." It may not be nutritionist-approved to argue that drinking a bloody mary is doing something good for your health, but I'll just let this sentence hang here...

The bloody mary also comes equipped with a snack, whether it's a simple celery stick or something more elaborate. Rumsey says you get "bonus points" if you eat the celery stick, or some other veggie that adorns the glass, because "you'll get some fiber to fill up your stomach and help slow digestion," which means you'll feel more satisfied, for longer. And if you're lucky enough to score a bloody mary garnished with things like cheese, shrimp and the like, the sustenance will serve as padding for your stomach, keeping you from getting too blitzed and unruly.

Mimosas are robbing you blind

Finally, the mimosa is the ultimate rip-off. Champagne is known to be one of the most overpriced items on restaurant menus. The beloved bubbly and other wines can have as much as a 500% markup, according to CNN, and "prices for wine sold by the glass are tripled or even quadrupled," because the joint has to account for the chance that they won't use up the whole bottle before it goes bad.

Ordering a single mimosa might be the same cost as the bar's entire Champagne bottle.

Even if your brunch crew opts for a carafe of drinks for the table, the mimosa is still a particularly shoddy deal.

"For the most part, if you're going to get mimosas, you're usually getting Wycliff [Champagne Brut], which is super cheap," Tom Buckle, a bartender in Long Beach Island, New Jersey, said in an interview, noting that even if it's not specifically Wycliff, the bubbly isn't costing the bar much.

"There's markup for sure — for the most part, a whole bottle of that Champagne, depending on the wholesale price, will cost anywhere from $4 to $7 for the bar," Buckle said. To put it another way, you ordering just a single mimosa, which, in Buckle's experience, at least, can cost around $9, you're paying for the bar's entire Champagne bottle, and then some. (Don't forget the tip!)

Yes, the bloody mary will come with the cost of being served at a restaurant, but Buckle said you could ask for a better quality vodka (or other spirit) to replace the bottom-shelf version, and still get a better value. "It will cost a little more for a better vodka, but that's still the way to go," he said.

As a bartender, Buckle has seen his fair share of hangovers come brunch time. He says the bloody mary is the better hangover remedy because it's often served with pepperoncini, a slim jim or blocks of cheese, and that little snack can go a long way.

This weekend, you know what to do.