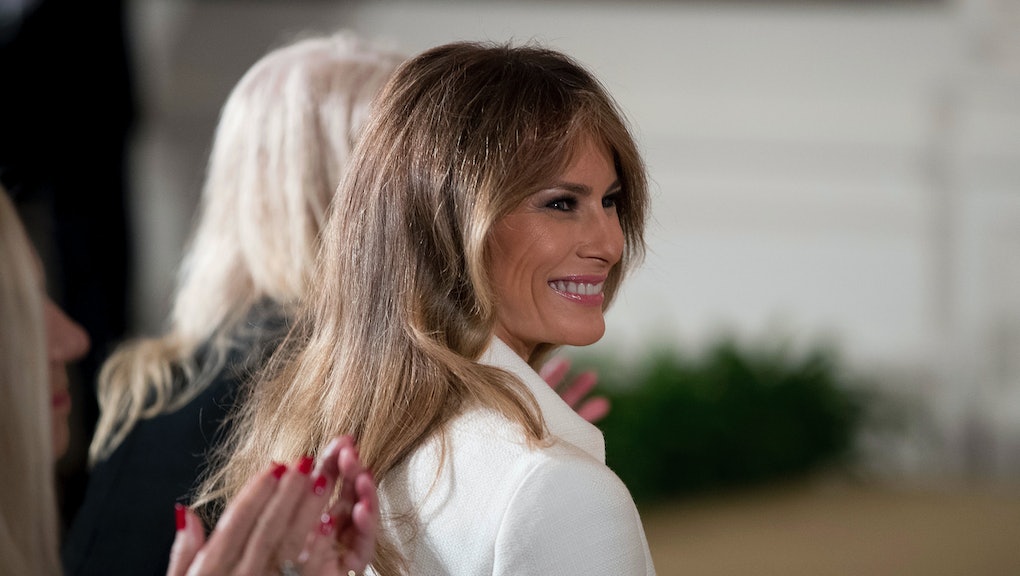 What's Melania Trump, President Donald Trump's third and current wife, and current first lady of the United States, been up to lately?

Posing for portraits, for one. On Monday, the White House released the first lady's official portrait. Here it is:

Since its release Monday morning, the first lady's official portrait has been dragged all over the internet for: Her choice of neck fastening (the so-called "pussy bow," which reminds some of her husband's jokes about sexual assault); the size of her ring (it is, admittedly, quite big); and the apparent airbrushing of the portrait.

Other first ladies have relied on minimal alterations in their official portraits.

But, hey, none of them were models, were they?

Aside from modeling, the first lady has also been hitting the fundraising circuit. On March 24, the same day her husband's attempt to repeal and replace Obamacare with the American Health Care Act was sent to an early grave by House Republicans, Mrs. Trump made an appearance at a Palm Beach County GOP fundraiser hosted at her husband's beachfront resort, Mar-a-Lago, according to the Palm Beach Post.

The event drew "nearly 700" people who paid upwards of $300 each to attend, the Post reported. Also in attendance were Florida Gov. Rick Scott and YouTube stars Diamond and Silk, vocal backers of Trump during the election.

Other than that, the first lady is just costing taxpayers an awful lot of money by staying in the Trump family penthouse in Trump Tower in New York, rather than at the White House in Washington, D.C.

Keeping Mrs. Trump and her son Barron safe costs taxpayers between $127,000 and $146,000 per day for New York Police Department protection alone, DNAInfo reports. Congress has set aside money to pay for the Trumps' protection, but some taxpayers wish they'd move to the White House, where keeping them safe would be cheaper. As of March 30, more than 400,000 had signed a petition asking the first lady and her son to relocate to Washington.