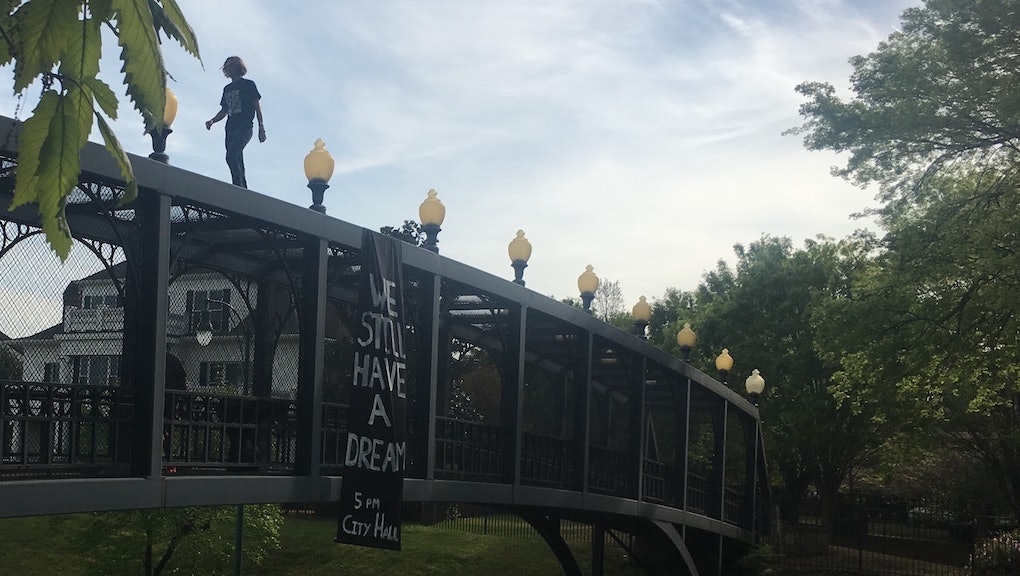 "We still have a dream" banner flies in Memphis, 49 years after MLK's assassination

MEMPHIS, Tenn. — Organizers with the Movement for Black Lives and the Fight for $15 dropped a banner in Memphis on Tuesday, marking the 49th anniversary of the assassination of Martin Luther King Jr. in the city where he was killed.

The banner, which reads "We still have a dream," also includes a call for residents to meet at city hall at 5 p.m. for a march to the Lorraine Motel, where King was killed on a balcony outside his second-story room.

The banner's placement seems symbolic, too. It hangs on Riverside Drive:: Riverside is the name of the church in New York City where King made one of his last major speeches, 50 years ago on Tuesday. Titled "Beyond Vietnam," the civil rights leader spoke out against not only the Vietnam War, but also racial and socioeconomic inequality in the United States:

Perhaps a more tragic recognition of reality took place when it became clear to me that the war was doing far more than devastating the hopes of the poor at home. It was sending their sons and their brothers and their husbands to fight and to die in extraordinarily high proportions relative to the rest of the population. We were taking the black young men who had been crippled by our society and sending them 8,000 away to guarantee liberties in Southeast Asia which they had not found in southwest Georgia and East Harlem. So we have been repeatedly faced with the cruel irony of watching Negro and white boys on TV screens as they kill and die together for a nation that has been unable to seat them together in the same schools. So we watch them in brutal solidarity burning the huts of a poor village, but we realize that they would hardly live on the same block in Chicago. I could not be silent in the face of such cruel manipulation of the poor. ...

Tuesday's action marks the start of a series of collaborative events spearheaded by a broad coalition of activists who are calling themselves The Majority. More than 50 groups will be represented in the coalition, including activists working on behalf of black people, Latinos, immigrants, refugees, the LGBTQ community, the poor and other marginalized groups.

On May 1, which is International Worker's Day, the Majority will launch protests in cities across the country.

"We will strike, rally and resist," the coalition wrote on its website.