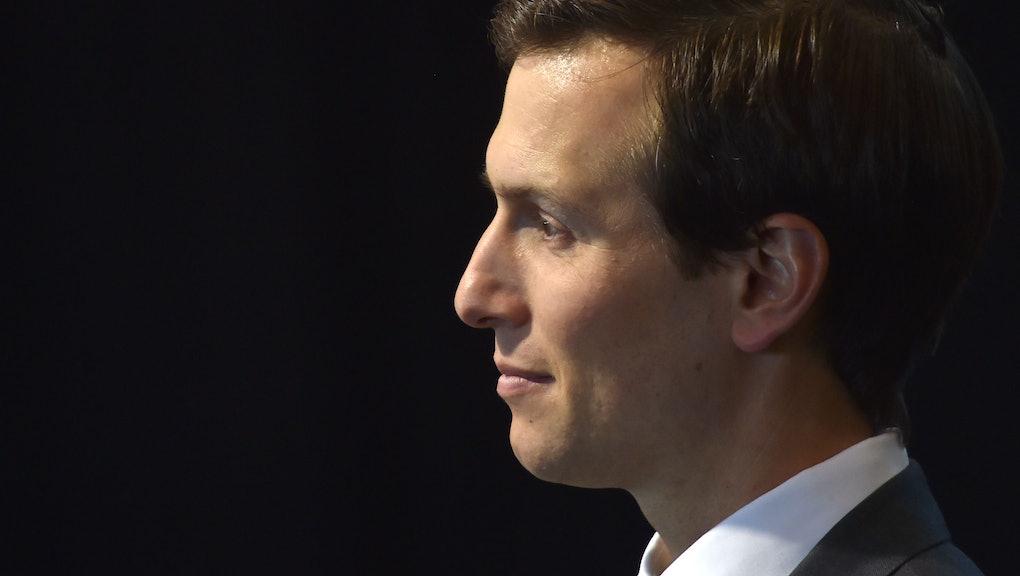 Jared Kushner: Here's everything Trump's son-in-law has on his growing to-do list

For a man in his 30s, Jared Kushner, who is married to President Donald Trump's daughter Ivanka Trump, has a lot of responsibilities. The president has reportedly given him broad authority to deal with tasks that would normally fall under the purview of several cabinet departments, including the departments of State and Justice, plus a number of other tasks. Here's a brief run-down of what's on Trump's son-in-law's ever-growing TDL:

Peace in the Middle East

Easily the largest item on Kushner's plate is to secure a lasting peace in the Middle East — a task seasoned diplomats have tried and failed to achieve since well before the 36-year-old was born.

On the eve of his inauguration, Trump told a crowd at an event in Washington that if Kushner "can't produce peace in the Middle East, nobody can."

As part of that mission, last week Kushner traveled to Iraq alongside Chairman of the Joint Chiefs of Staff Marine General Joseph Dunford to meet with Iraqi Prime Minister Haider al-Abadi. The group discussed the ongoing fight against the Islamic State terrorist group and whether the U.S. should leave troops in Iraq after that fight is over.

"As the first visit to Iraq by a senior member of Mr. Trump’s White House, Mr. Kushner’s arrival highlighted the president’s approach to foreign affairs of often relying on loyalists with little experience in matters of war and diplomacy," the New York Times reported.

Kushner also met with the U.S. ambassador to Iraq and the top American commander in the country, Lieutenant General Stephen Townsend, Reuters reported.

Trump's presidential campaign focused heavily on his business acumen. Throughout the election, he touted his ability to lead profitable companies as a reason voters should cast their ballots for him.

Now, Trump has tasked Kushner with overhauling the federal government to run more like one of his companies.

The White House Office of American Innovation, as it's to be called, will gather "information, ideas and experiences" from the private sector and thought leaders and apply them to the federal government, the president announced in a memo dated March 27.

What exactly Kushner plans to do remains unclear, but previous administrations, both Republican and Democrat, have tried with various degrees of success to overhaul the cumbersome federal government. In 1993, the Clinton administration created an inter-agency task force called the National Performance Review tasked with crafting a plan to make government "less expensive and more efficient, and to change the culture of our national bureaucracy away from complacency and entitlement toward initiative and empowerment," in the words of former President Bill Clinton. As a result, the federal government reduced its workforce by around a quarter of a million jobs and several small agencies were eliminated, but Congress resisted more sweeping changes.

Former President George W. Bush also campaigned on reforming government, but, in the wake of the 9/11 terrorist attacks, the number of government agencies ballooned as the Bush administration drastically expanded the country's national security apparatus. As the Washington Post reports,

The top-secret world the government created in response to the terrorist attacks of Sept. 11, 2001, has become so large, so unwieldy and so secretive that no one knows how much money it costs, how many people it employs, how many programs exist within it or exactly how many agencies do the same work.

On the campaign trail, Donald Trump was no friend to China. He accused the country of, among other things, stealing American jobs and inventing global warming (which he called a "hoax") to hobble American manufacturing.

Now, China is looking for ways to get the president's ear, and his son-in-law reportedly fits the bill. According to multiple media reports, Kushner has served as a back channel for negotiations ahead of the president's Thursday meeting with China's President Xi Jinping.

According to the Washington Post, Kushner was looped into the China backchannel by former Secretary of State Henry Kissinger, who supported Trump's opponent, Hillary Clinton, during the election.

According to the New York Times, Chinese diplomats feel comfortable with Kushner, even as traditional diplomats at the State Department are sidelined under the Trump administration. "Since Kissinger, the Chinese have been infatuated with gaining and maintaining access to the White House," Evan Medeiros, who served as a senior director for Asia in the Obama administration, told the Times. "Having access to the president's family and somebody they see as a princeling is even better."