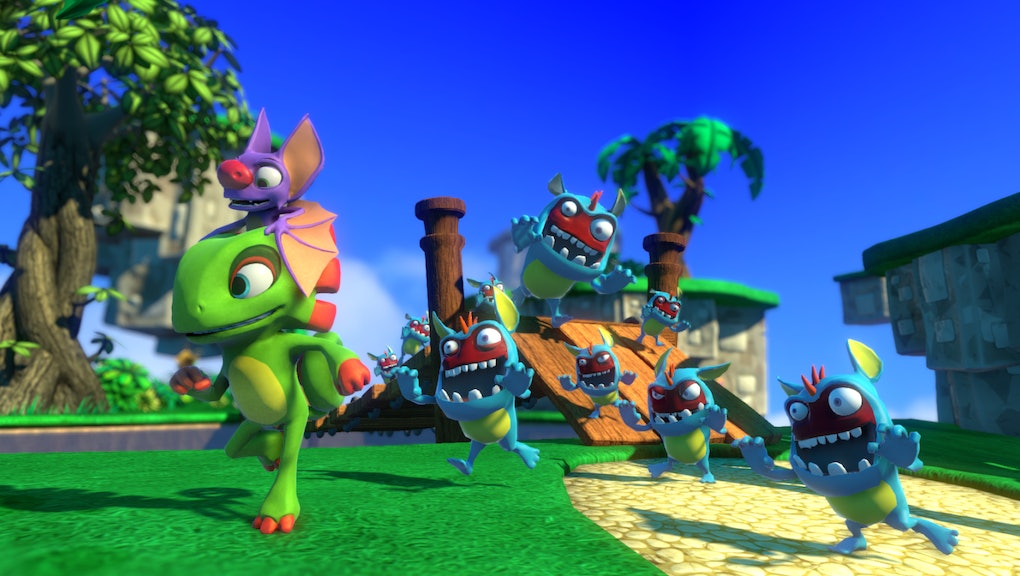 'Yooka-Laylee' Review: When too much nostalgia is just enough

The Nintendo 64 was home to some of the greatest 3-D platformers of all time, but at times it can feel like the genre both debuted and reached its zenith in one console generation. Following the success of 2-D indie platforms like Super Meat Boy and Braid, you might think a resurgence in 3-D platforms could be next. Enter Yooka-Laylee.

The Banjo-Kazooie-inspired platformer just launched to mixed reviews. Does Yooka-Laylee fail to live up to the tradition it invokes? Or is nostalgia alone enough to make this a worthwhile game? Let's discuss.

Before Rare was purchased by Microsoft and relegated to producing Kinect titles, it was one of the greats. Rare produced titles for Nintendo as a second-party studio, including wonderful games like Banjo-Kazooie, Banjo-Tooie and Conker's Bad Fur Day.

Rare's relationship with Microsoft hasn't proved as fruitful, and a lot of the companies original staff has departed since the merger. Then, in 2015, some of these staff joined to form Playtonic Games. Their first title, Yooka-Laylee, is designed to be a nostalgic throwback to the days when Rare was a household name in gaming.

In the simplest terms: Yooka-Laylee is Banjo-Kazooie with a chameleon and a bat instead of a bear and a bird. Yooka and Laylee form a symbiotic pair who use their individual powers to create one coherent move set. A central hub leads to five worlds, which you must travel between as you attempt to find pagies (the Yooka-Laylee version of jiggys) to unlock more levels.

Like Banjo-Kazooie, there are a host of special moves you'll need to learn in each level. Once you learn a special move, it will usually let you proceed to areas in pervious levels that you previously couldn't explore. The entire experience is very reminiscent of a Nintendo 64 platformer, which might suggest that the developers accomplished their goal and created a great new game. However, upon closer inspection, you'll notice the colorful, bouncy veneer of nostalgia is peeling.

Nostalgia paints our eyes rose and instills us with the naiveté of our younger selves, but nothing clears up all that sappy sentimentality like actually playing a 3-D platformer, flaws and all. At least when I boot up the actual Nintendo 64 for a romp through Super Mario 64 or Banjo-Kazooie, it's clear that the flaws in those games were due to the technical limitations of those systems. Unfortunately, Yooka-Laylee does little to fix these issues.

The fact that Yooka-Laylee resigns itself to the exact same playstyle with the exact same limitations is what causes it to fall flat. Sure, the graphics are better and the controls are tighter, but that's about the only difference between Yooka-Laylee and a 3-D platformer from the N64 days. In attempting to replicate that classic gameplay, Playtonic hit way too close to the mark and didn't include the modern conveniences and conventions that could have given us a definitive 3-D platformer for the current gen.

Here's one small example: Yooka-Laylee features a sizable overworld, but doesn't offer a map to help you navigate — which is pretty much expected in most modern games. Even worse, the game forces you to do plenty of backtracking, which makes a map particularly useful. Considering that the game's core audience is 20- or 30-somethings who are now busy with jobs and possibly families, Yooka-Laylee does not lend itself to a "pick-up-and-play" mentality.

So if Yooka-Laylee doesn't really bring anything innovative to the table, is it at least as good as Banjo-Kazooie? No, it isn't. Banjo-Kazooie was a product of its time, an organic construct that was created to be the best game it could be with the equipment and tools Rare had access to during its development. But with Yooka-Laylee, Playtonic's main goal seemed to be simply copying the old classic as closely as possible without getting sued.

For example, anyone that played Banjo-Kazooie (or watched the video above) will remember the sounds that represented talking in that game. These sounds were used because a Nintendo 64 cartridge didn't have the space to hold fully recorded voiceovers for each character, but Rare still wanted to use audio to give each character a little more personality. These short sound loops could fit on the cartridge, and they gave an extra burst of individuality to the cast.

Yooka-Laylee uses the same audio style as its spiritual predecessor. But what came off as charming and humorous in Banjo-Kazooie feels cheap and lazy in Yooka-Laylee. Why not go the extra mile and give your characters a voice if you have the capability? Nostalgia simply isn't a good enough answer.

There are numerous other instances of Yooka-Laylee attempting to pay homage to classic 3-D platformers in ways that come off as stilted and gimmicky. The 2-D platformer has been successful with indie developers in the last few years because developers use the classic format to create something new and unique. Unfortunately, Yooka-Laylee is just more of the same games we got in the late '90s — complete with the frustrating aspects and nothing new to keep us interested.