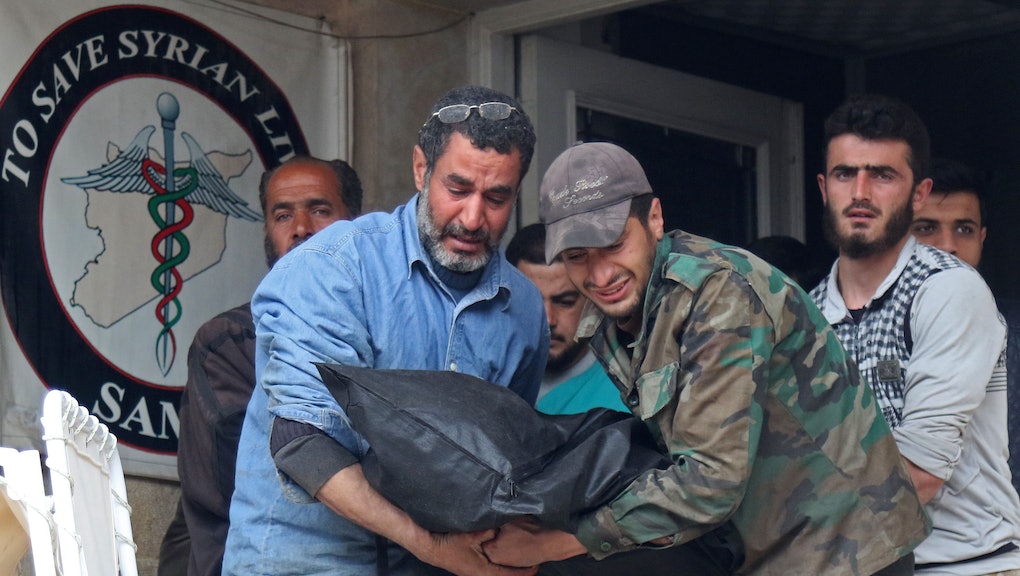 Syrian Civil War: Here's how many Syrian civilians the US has killed since the war began

The day before the U.S. missile strike, Trump strongly condemned the chemical attack. "Beautiful babies were cruelly murdered in this very barbaric attack," he said in a press conference.

But in its efforts to destroy ISIS forces in Syria and Iraq, the U.S.-led coalition has killed Syrian civilians, too. Exact death tolls vary from source to source, but here's a round-up of the estimates.

The number of civilians U.S.-led coalition forces say they have killed since their airstrikes began in 2014.

The number of civilians the Syrian Network for Human Rights says have been killed by U.S.-led coalition forces in Syria, as recently as March 18.

The estimated number of Syrians killed since the war began in 2011.

In March, the England-based Syrian Observatory for Human Rights told Reuters at least 465,000 Syrian civilians have been confirmed missing or dead since the country's gruesome civil war began more than six years ago.

President Donald Trump's controversial decision to bomb Syria has received some bipartisan praise in the U.S., along with anti-war outrage in cities like Boston, New York, Detroit and Jacksonville, Florida, where a demonstration turned violent on Friday, according to the Huffington Post.

Proponents of Trump's action argue the U.S. needed to take action because the attack grossly violated the 2013 international agreement Assad made with UN members to get rid of his country's chemical weapons stockpile after allegedly using said weapons in an even worse attack in August of that year.

The U.S. attack has been criticized by Russia, a top Syrian ally, and China, whose foreign ministry spokeswoman today said her country opposes what it calls a U.S. attack on "territorial sovereignty," the Independent reports.