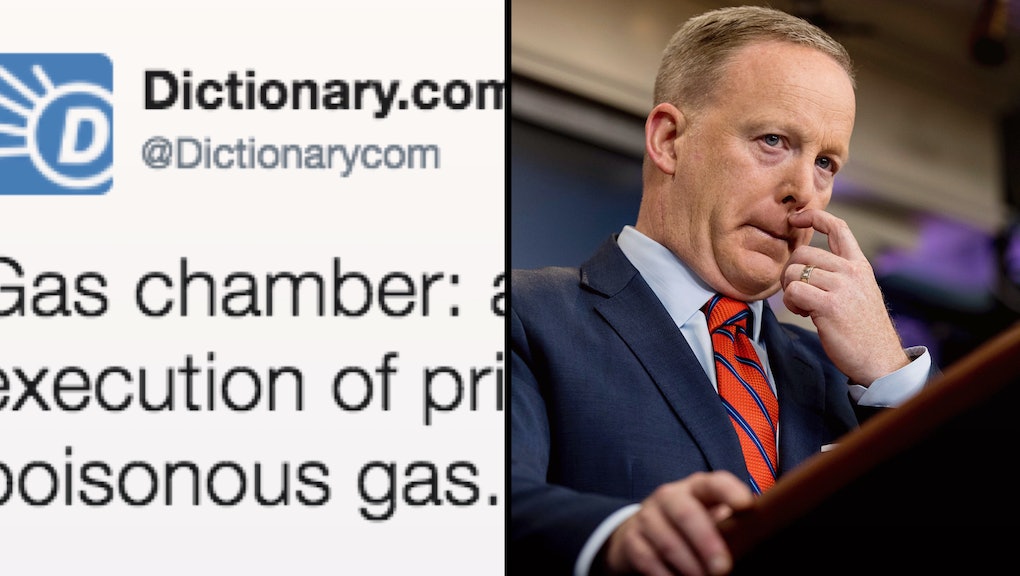 White House press secretary Sean Spicer may want to read through a few history books before stepping up to the podium at briefings.

On Tuesday, while answering a question regarding Russia's continued support of Syrian President Bashar Al-Assad, Spicer said, "We didn't use chemical weapons in World War II. You had a — someone who is as despicable as Hitler who didn't even use chemical weapons. You have to, if you're Russia, ask yourself, is this a country and regime you want to align yourself with?"

It appears Spicer forgot about Hitler's use of the gas chamber. Dictionary.com, however, was quick to correct the press secretary, tweeting:

Spicer, realizing his mistake, backtracked the statement and clarified that he meant Hitler did not use "gas on his own people the same way that Assad is doing." He added that instead, Hitler brought his victims to a "Holocaust center." Dictionary.com went ahead and corrected that statement too, tweeting:

Following his first two statements Spicer clarified a third time noting, "In no way was I trying to lessen the horrendous nature of the Holocaust. However, I was trying to draw a contrast of the tactic of using airplanes to drop chemical weapons on innocent people."

This wasn't the first (nor will it likely be the last) time Dictionary.com has corrected one of Spicer's statements. In early March, during a press briefing, Spicer told Axios reporter Jonathan Swan, "There's this assumption in Washington, Jonathan, that if you get less money, it's a cut." Dictionary.com responded to that statement with a tweet explaining to Spicer what "cut" means:

Dictionary.com isn't alone in its quest to right the wrongs of politicians and their poor choice of words. In January, Mic spoke with Lauren Naturale, a social media manager with the Merriam-Webster Dictionary, whose tweets are as equally biting and hilarious as Dictionary.com's.

And politicians sure are making their jobs easy. Naturale, for example, made the account famous by tweeting out the simple definition of "fact."