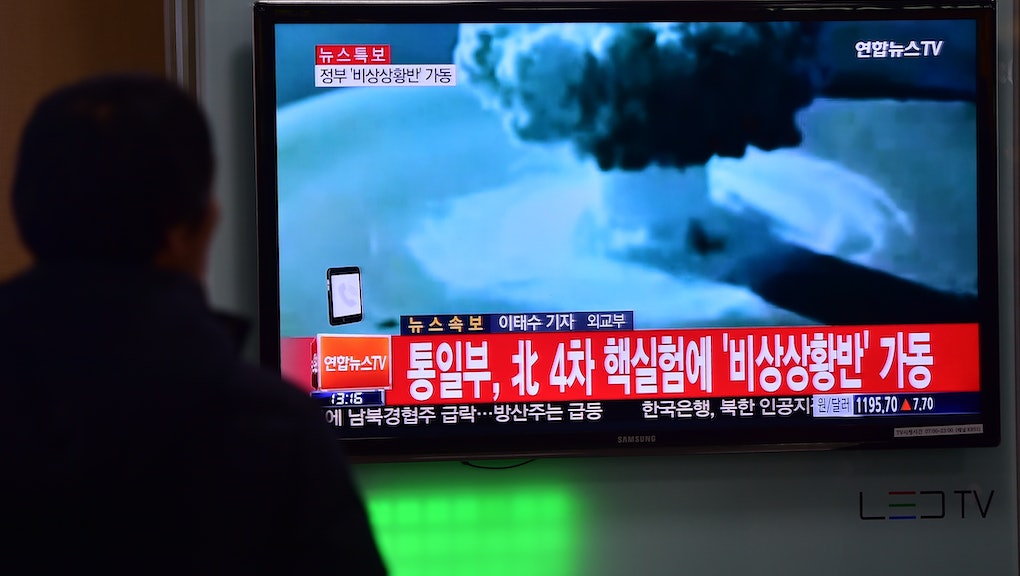 What is thermonuclear war? Here's what North Korea's threats mean for the U.S.

North Korea's nuclear ambitions pose a mass destruction threat to the United States that some argue is comparable to that of the Soviet Union during the Cuban Missile crisis.

The Department of Defense confirmed the rogue state and its totalitarian leader, Kim Jong-un, already have nuclear capability, having conducted five successful nuclear tests beginning in October 2006. Its intercontinental ballistic missile test on Saturday was a bust, ending in premature detonation.

So far, the "hermit kingdom" is not yet capable of firing nukes that can reach the U.S. mainland. But regardless of whether its capabilities change, North Korea could soon force the United States to engage in a thermonuclear-style military confrontation for the first time in 55 years.

What's the most immediate threat?

North Korea's lack of ICBM technology may keep it from directly striking the United States for now, but that doesn't mean the impoverished nation with the antagonistic regime poses no threat to U.S. allies and interests in the region. The threat is especially strong in Japan and neighboring South Korea, where millions could potentially be killed by a North Korean nuclear strike.

Vasily Kashin, senior research fellow at the Center for Comprehensive European and International Studies at the National Research University-Higher School of Economics, told National Interest Magazine that war with North Korea could mean massive casualties in South Korea, a country of more than 50 million people — including thousands of Americans.

"It would be a humanitarian disaster and a shock for [the] global economy," Kashin said. "[North Korea] has these hundreds of missiles, which are hard to stop."

What exactly are nuclear weapons?

Nuclear bombs are regarded as the most dangerous weapons on the planet — and for good reason.

A modern thermonuclear bomb can be millions of times more powerful than a conventional one. For example, the United States' largest nuclear bomb, the B83, has a blast equivalent of 1.2 million tons of TNT, according to multiple sources.

How many nukes does North Korea have?

Revised estimates from the Washington-based Institute for Science and International Security concluded that North Korea could have 13 to 21 nuclear weapons, each with half the destructive force of the atomic bombs dropped on Japan during WWII, according to the Sun.

The atomic bomb deployed by the United States on Aug. 6, 1945, destroyed 90% of the city of Hiroshima and immediately killed 80,000 people, though "tens of thousands more would later die of radiation exposure," according to the History Channel. Another 40,000 people were killed in Nagasaki three days later, on Aug. 9, 1945.

Which countries have the most nuclear weapons?

As of April 4, Russia and the United States have the largest nuclear stockpiles, with an estimated 7,000 and 6,800 warheads, respectively, according to the Federation of American Scientists.

The number of overall nukes in the world has declined dramatically since the height of the Cold War. According to the International Campaign to Abolish Nuclear Weapons, North Korea, India and Pakistan are the only nations to have tested nuclear weapons since the Comprehensive Nuclear Test Ban Treaty was signed in 1996.