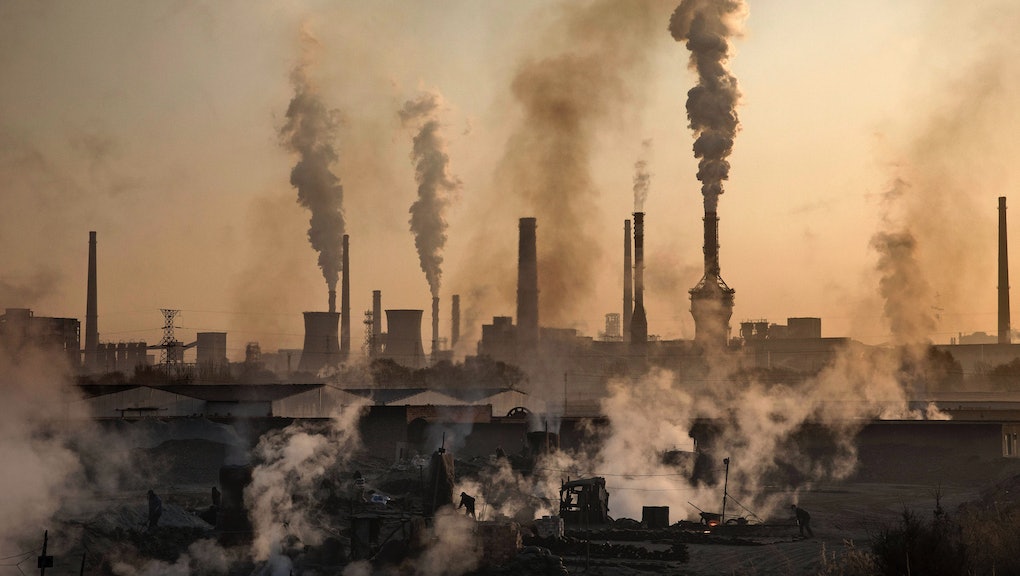 The signs of struggle are all apparent on Mother Nature's face. The Earth is gasping for air in Australia's Great Barrier Reef, crying out as creature after creature disappears from the planet and is already feeling the pain as natural wonders continue to crumble.

Sure, there is still plenty to feel hopeful about with the environment. In 2016, giant pandas were removed from the endangered species list after nearly going extinct. In March, the West Indian manatee made a "dramatic turnaround," the federal government said, to finally be removed from the endangered species list. And in his 8 years in office, Barack Obama protected more than 550 million acres of land for future generations to enjoy.

But in order to celebrate these wins, especially as we close in on Earth Day on April 22, we must also remain humble and be reminded of the environmental fights we have already lost so that we can learn from our mistakes and fight for a better future for us, our children, and the world. Below are 5 environmental battles we have sadly already lost, or are very close to losing, to remind us we need to keep fighting.

The islands of Kiribati

Kiribati, a South Pacific nation made up of 32 small islands, has become synonymous with climate change. The estimated 110,000 people living on the islands are in serious trouble due to increasing sea level rise. One resident, Ioane Teitiota, even applied for asylum in New Zealand, claiming that he was unable to grow food or find potable water because of sea level rise. The New Zealand courts ultimately rejected his claim but Teitiota has since appealed to the Office of the United Nations High Commissioner for Human Rights, according to the New York Times.

"The outer island communities have been affected, we have a village which has gone, we have a number of communities where the sea water has broken through into the freshwater pond and is now affecting the food crops," Kiribati's president, Anote Tong, told the BBC in a 2016 interview. "That is happening on different islands, it's not an isolated event, serious inundation is being witnessed. These are the realities we are facing, whether they are climate change induced or not."

The Great Barrier Reef along the Australian coast is one of the 7 natural wonders of the world. Its breathtaking beauty and size can even be seen from space. It is the world's biggest single structure made by living organisms. It is also in "terminal stages" of coral bleaching, according to scientists with the Australian Research Council's Centre of Excellence for Coral Reef Studies.

"The significance of bleaching this year is that it's back to back, so there's been zero time for recovery," Professor Terry Hughes, who led the surveys, told The Guardian. "It's too early yet to tell what the full death toll will be from this year's bleaching, but clearly it will extend 500km south of last year's bleaching."

Hughes additionally warned that Australia now faces a rapidly closing window to save the reef. It can only be done, according to Hughes, by taking immediate action on climate change.

The lumbering giant holds the fate of his entire species in his hands and it all comes down to his ability to mate with two female northern white rhinos living at the same conservancy.

The three rhinos are under 24-hour protection by armed guards, according to CNN. These rhinos, and others, are targeted by poachers thanks in large part to the belief in Asia that their horns cure various diseases and ailments.

Due to health issues in each of the rhinos, the species can only be saved through an ambitious plan including stem cell technology, IVF, the creation embryos and a surrogate rhino mother.

"It is not an easy task getting eggs from female rhinos, and we may find we simply do not have enough viable eggs to create embryos in the numbers we want," Professor Cesare Galli, of Bologna University, told The Guardian. "If that turns out to be the case, we will have to take a different approach."

The Amazon Rainforest stretches across the borders of 9 countries: Brazil, Peru, Colombia, Venezuela, Ecuador, Bolivia, Guyana, Suriname and French Guiana. It has long been the darling of conservationists the world over due to its stunning beauty and diverse bioculture. In fact, the Amazon is home to 10% of the world's known species. Through years of work the deforestation that plagued the 1.4 billion-acre landscape slowed, however since 2014, thanks to easing environmental regulations in Brazil, the rainforest has once again seen a massive uptick in deforestation.

"The policy director of Greenpeace, Marcio Astrini, says among the causes of the increased deforestation were actions taken by the federal government between 2012 and 2015, such as the waiving of fines for illegal deforestation, the abandonment of protected areas — that is, 'conservation units' and indigenous lands — and the announcement, which he calls 'shameful,' that the government doesn't plan to completely stop illegal deforestation until the year 2030."

On April 17, a team of scientists announced they documented what is the first case of large-scale river reorganization as a result of human-caused climate change, the Washington Post reported. This means a river running through Canada's Yukon territory will never again supply water to Yukon's largest lake in the way it once did, and instead will channel freshwater to the Pacific Ocean south of Alaska.

The researchers, which dubbed the reorganization "rapid river piracy," said they found the retreat of Kaskawulsh Glacier—one of Canada's largest glaciers— abruptly and radically altered the regional drainage pattern in spring 2016.

"The river wasn't what we had seen a few years ago. It was a faded version of its former self," lead study author Daniel Shugar of the University of Washington at Tacoma told the Washington Post. "It was barely flowing at all. Literally, every day, we could see the water level dropping, we could see sandbars popping out in the river."

The team noted in its findings, which were published in the journal Nature, that based on their review of satellite images and a signal-to-noise ratio as a metric of glacier retreat, "we conclude that this instance of river piracy was due to post-industrial climate change. Rapid regional drainage reorganizations of this type can have profound downstream impacts on ecosystems, sediment and carbon budgets and downstream communities that rely on a stable and sustained discharge."