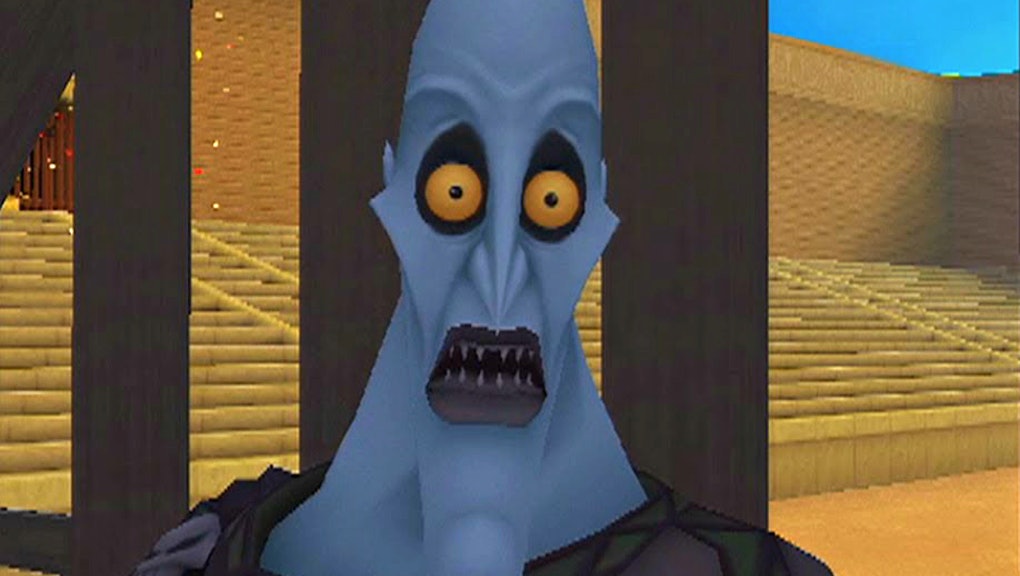 Your first encounter is with Final Fantasy VII's Yuffie, who is best countered with the errant Dodge Roll to make sure you can avoid her jarring shuriken attacks. Launch an offensive on her with Ars Arcanum or your regular selection of melee combos. She isn't very difficult, so you shouldn't have a problem clearing her out. You'll be rewarded with Goofy's Genji Shield, which should make the match well worth your while.

This fight is a little tougher than Yuffie. You'll want to try and jump on the Behemoth's back and swing away at its horn to do maximum damage. Eventually, after doing enough of this, it'll lower its head down. You can move back down and start hitting it there. Avoid its powerful laser and jump on its back when it preps the laser. When you finish off the Behemoth, your Blizzard spell will be upgraded, making it a much more powerful skill.

Cerberus is a fight similar to Behemoth where you'll need to hop on the beast's back to avoid some of its damaging darkness spells. Use Strike Raid to deal damage on your own, and use your roll to get out of the attack radius when he tries to use attacks that send darkness and energy balls throughout the play field. Use Aero and its related skills to do some major damage as well. When you defeat Cerberus, you'll get an upgrade to your Thunder ability.

You'll face Cloud from Final Fantasy VII and Leon (Squall) from Final Fantasy VIII in this battle. Turn your attention to Cloud first, and keep using Ars Arcanum as well as regular melee combos. Then switch to Leon when you get a chance, dodge rolling and jumping away from their tandem sword attacks here and there. When you complete this battle, you'll be given the Lionheart keychain.

Hades himself is the penultimate boss you'll have to face, and he can be a doozy. He can send out several different attacks, like a wave of fire he swings across in front of him, fireballs, and flame pillars. He also has a unique additional HP bar that makes him a long, frustrating battle. Just keep whittling him down by using Blizzard to negate his fire-based attacks and Ars Arcanum. Keep drilling into Hades until he finally collapses, and you'll be rewarded with upgraded Gravity magic and Ansem's Report 8.

This is the most difficult encounter of the Hades Cup, and as such, you'll want to take care. The Rock Titan has several annoying attacks like shockwaves you can avoid by jumping. Lock onto its feet and start plugging away with nearly any attack you have access to. Use Aerora or one of the Aero abilities on Sora and your party for a good chunk of additional damage as well. At the end of the battle, you'll be gifted the Trinity Limit ability for your trouble.