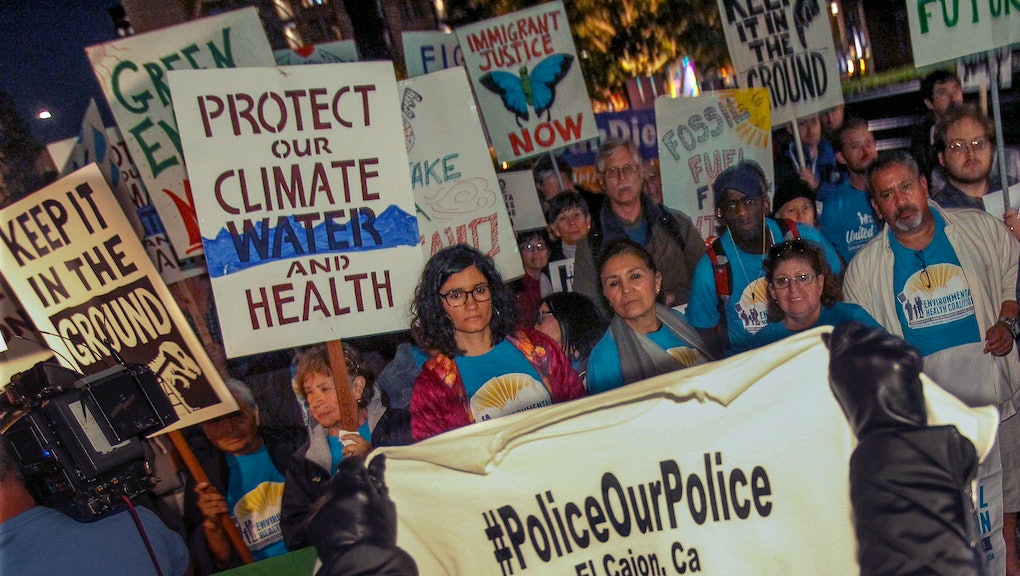 The March for Science on Saturday is set to be one of the largest interdisciplinary shows of force by biologists, chemists, mathematicians, medical doctors, climatologists and other scientists. If organizers have done their jobs right, it won't just be white folks in lab coats.

The march will take place in more than 600 locations in the U.S. and around the world on Earth Day. Organizers said it will be "an unprecedented gathering of people standing together to acknowledge and voice the critical role that science plays in each of our lives," according to an official website. No doubt, science is at the center of social and racial injustice issues that have sprung up in recent years.

"I think it's so easy to forget how fundamental science is to validating people's existences."

It was science that helped uncover the poisoning of the water supply in the majority-black city of Flint, Michigan. Science helped determine the environmental dangers posed by the Dakota Access pipeline project at Standing Rock. Scientists continue to uncover evidence that communities of color are disproportionately impacted by climate change and exposure to pollution. It's science that could have exonerated a man who was executed on Thursday in Arkansas.

"I think it's so easy to forget how fundamental science is to validating people's existences," Ayana Elizabeth Johnson, a marine biologist who is co-director of national partnerships for the march, said in a phone interview. Johnson said organizers sought diversity at all levels. "These are the voices that will turn this from a march into a movement."

The march has drawn a diverse grouping of organizations that represent the underrepresented, Johnson said. They include the American Association of University Women, Girls Who Code, the national societies of black physicists and engineers and SACNAS, an organization created to advance Latinos and Native Americans in the field of science, among others. Mona Hanna-Attisha — the director of the Michigan State University and Hurley Children's Hospital Pediatric Public Health Initiative in Flint, Michigan, who was credited with discovering lead contamination that continues to affect the majority-black community — was named an honorary co-chair of the March for Science.

"In Flint, the science of our water contamination was irrefutable," Hanna-Attisha said in a statement released Tuesday. "As scientists and doctors we have a moral obligation to speak out in service to our communities. Likewise, the life and death implications intertwined with the science of climate change, vaccines and air pollution are moral issues."

It has taken a movement within the LGBTQ community to shift homophobic and transphobic attitudes in scientific communities, Raffi Freedman-Gurspan, director of external relations at the National Center for Transgender Equality, said in a phone interview. The center decided to be a national partner of the march, Freedman-Gurspan said.

Freedman-Gurspan said their group will bring about 45 people to the flagship march in Washington, D.C., to highlight discrimination faced by transgender people in the workplace, which makes it especially difficult for them to advance in fields of science.

Satellite marches are being staged in cities including Chicago, Los Angeles, San Francisco and New York City. Organizers in the Big Apple said they have signed up nearly 100 marching groups, some of them representing populations and interests outside of the scientific community.

"We are so happy that so many non-scientists are embracing the march," Mutale Nkonde, a Brooklyn-based teacher and co-chair of the New York City march, said in an email to Mic. "It shows how much New Yorkers love the scientific process."

Some science marchers are undoubtedly motivated by the Trump administration's proposed budget cuts to the National Institutes of Health, the Department of Energy's Office of Science and the Environmental Protection Agency, among other agencies. As proposed, the 2018 budget slashes $6 billion from the NIH, which would be devastating to the biomedical research community, advocates told Science magazine in March. Opposition to defunding the sciences, along with diversity in science, technology, engineering and math fields, are part of the national march's core principles.

President Donald Trump's budget proposal troubles Renee Horton, a NASA engineer in New Orleans who is president of National Society of Black Physicists, which boasts about 300 members nationwide. Horton said she is concerned about how residents of Flint, Michigan, will fare under a government that strips resources from vital fields of scientific research.

"It makes me scared that my problems and the problems that affect African-Americans will be lost," Horton said in a phone interview. "You start wondering whose problems will be elevated — who will be taken care of or won't be taken care of."

That's partly why Horton was eager to sign on as a national partner of the March for Science, after organizers approached the black physicists, she said. Marching will also change the prevailing image that the word "scientist" means white lab geeks.

"The rest of the world may see it that way, but we don't," Horton said. "My friends are lab geeks."