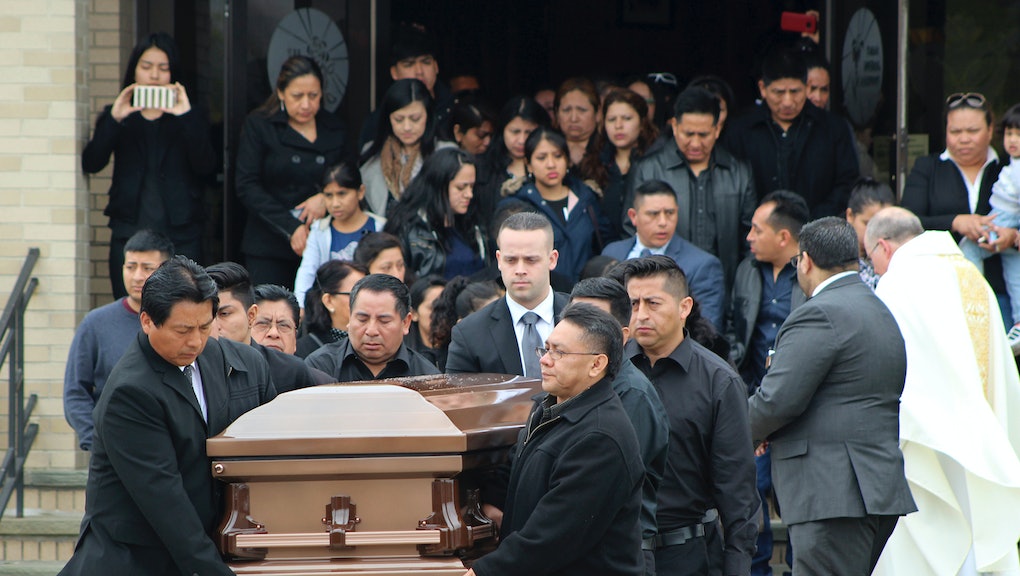 What does MS-13 stand for? 5 facts to know about the international criminal gang

The Trump administration is capitalizing on a recent string of headline-grabbing murders linked to the notorious Latin street gang MS-13.

On April 19, the family of 16-year-old Justin Llivicura laid his body to rest in New York's East Patchogue neighborhood of Long Island, the New York Daily News reported. Llivicura was the youngest of four youths killed in a suspected MS-13-related quadruple homicide. Authorities found the teen's body in a Suffolk County park on April 12, along with three other brutally murdered young people, according to the Daily News.

The scene surfaced less than six weeks after March 2, when six suspected MS-13 members were charged in the September 13 machete and baseball bat-involved homicides of two Long Island teen girls, Nisa Mickens, 15, and Kayla Cuevas, 16, the Daily News reported. Both incidents are part of an ongoing string of high-profile, MS-13-related homicides.

President Donald Trump tweeted about the infamous Latin gang on the same day, revisiting the themes of his racist campaign trail tirade about undocumented Latin-American immigrants being "rapists" who are "bringing crime" and "drugs" into the country in apparent hopes of pressuring Democrats in Congress to fund his proposed border wall.

Multiple news outlets already have published stories debunking the president's myths about who's to blame for the nationwide rise of the MS-13 gang.

News service InsightCrime.org, which specializes in reporting on crime issues in Latin America and the Caribbean, said Trump should link the MS-13 gang's U.S. resurgence to President Ronald Reagan, not Barack Obama.

Reporter Héctor Silva Ávalos pointed out the gang took root in Los Angeles in the 1980s, during Reagan's administration.

Politifact reported the gang migrated to the east coast in the late 1990s and early 2000s, grabbing attention from the FBI and ICE about a decade before Obama took office.

A 2012 report to Congress on Central American gangs indicated the MS-13 gang "was created during the 1980s by Salvadorans in Los Angeles who had fled the country's civil conflict." The bloody, anti-communist, CIA-involved, Central-American civil wars of the 1950s, 60s, and 70s, caused citizens — primarily from El Salvador, but also Honduras and Guatemala — to flee to Southern California in search of refuge.

Ironically, thousands of MS-13 members have been deported back to their native countries over the years, where the gang has wrought bloody havoc killing men, women and children, and causing tens of thousands more refugees to flea the region to the U.S., according to CNN and the American Immigration Council.

The name MS-13 has an unusual history

Origin stories of the gang's notorious moniker vary, but the FBI said the "MS" in MS-13 stands for "Mara Salvatrucha" — "mara" being a Central-American word for "gang," "salva" referencing "El Salvador," the main country of origin for many founding members and "trucha," being a slang term meaning "clever" or "sharp," according to InsightCrime.

In his 2016 book Gangster Warlords, author Iaon Grillo, citing reports from Spanish-language news site El Faro, wrote that the name "Mara" is rooted in actor Charlton Heston's 1950s film The Naked Jungle. The title translates to "Cuando Ruge la Marabunta" or "When the Ants Roar." Heston's movie was a major hit in El Salvador, according to Business Insider.

"Following this [film]," Grillo wrote, "Salvadorans took the name Mara to mean group of friends, who, like ants, protect each other."

They joined forces with the more-prominent Mexican Mafia and added the number 13 to their name because the "M" in Mexican is the thirteenth letter in the alphabet, multiple sources, including the U.S. Department of Justice, confirm.

MS-13 is the first designated international street gang by the U.S. Treasury Department

While the Trump administration may be using racist fear of undocumented immigrants and the MS-13 gang for political gain, the gang's deadly violence and flourishing numbers should not be understated.

In 2012, the U.S. Department of Treasury made the MS-13 the first designated international street gang, citing around 30,000 members in Central-American countries and about 8,000 members in 40 U.S. states.

El Salvador's murder rate fell 40 percent in 2012 when federal authorities negotiated a temporary truce between MS-13 and its rival gang Barrio 18. That drop was followed by the record-breaking, deadliest month in the nation's last 10 years once the truce was broken in 2015, according to the Los Angeles Times.

The re-ignited gang war that year made El Salvador the murder capital of the world, according to multiple sources.

The Guardian reported violent crime in El Salvador jumped 70% in 2015 as a result, with the country's Institute of Legal Medicine reporting more than 6,600 homicides that year, according to the Times. This, in a nation that only has about 6.1 million people.

"That translates into a national homicide rate of almost 116 per 100,000, more than 17 times the global average," Times columnist Robert Muggah wrote in March 2016. "Compare El Salvador's totals with the 516 slayings reported in 2014 in Canada, a country with almost six times the population."

MS-13 is notorious for its brutal murders

It's not just how many people the MS-13 gang kills. It's also how its members kill their victims. The gang is most notably characterized by its sensational use of violence.

In March, People reported MS-13 members in Houston allegedly murdered a 15-year-old girl in a "Satanic" ritual after they allegedly drugged and raped another teen girl who escaped.

The gang is also known for its machete attacks on its victims.