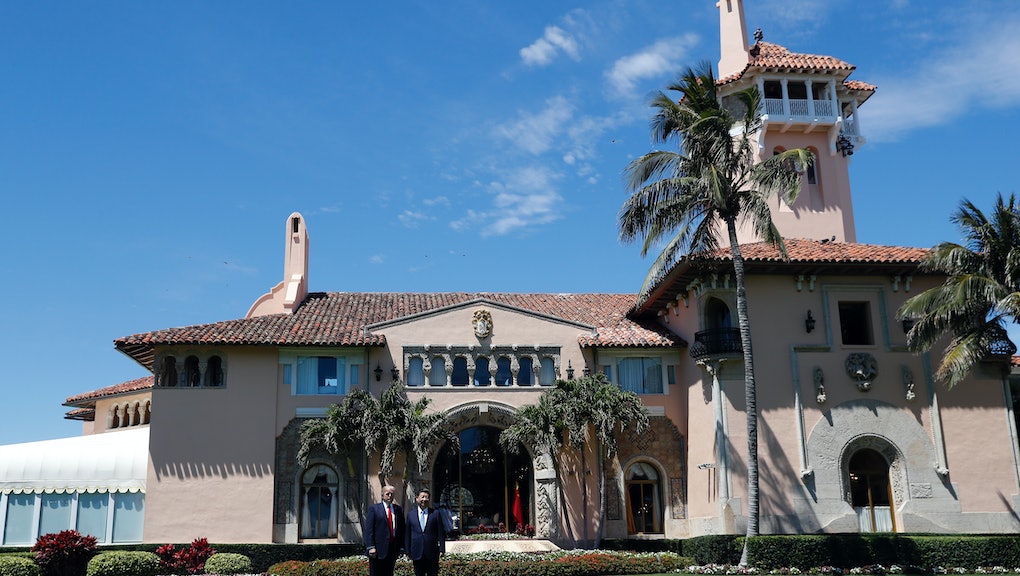 President Donald Trump's conflicts of interest are well-documented. As Mic reported in December, Trump's known conflicts include the time he allegedly encouraged Nigel Farage, the interim leader of the United Kingdom's independence party, to oppose wind farms near his golf courses because they'd ruin the view, his outstanding loans to the Bank of China and his hotel in Rio de Janeiro in Brazil, which is currently under investigation for "illicit commissions and bribes."

And now we can add one more to the list: The State Department is officially promoting Trump's Mar-a-Lago club on its sites.

"Mar-a-Lago, President Trump's Florida estate, has become well known as the president frequently travels there to work or host foreign leaders," a post shared on the websites of the the United States embassies in the United Kingdom and Albania read. The post, which appears to be written prior to Trump hosting Chinese President Xi Jinping at Mar-a-Lago, continues by noting the meetings Trump will have with world leaders at the private club in the future. The blog was originally published on Share America, the Department of State's "platform for sharing compelling stories and images that spark discussion and debate on important topics like democracy, freedom of expression, innovation, entrepreneurship, education and the role of civil society."

The post has drawn ire from social media users and political leadership, who say it acts as an ad to attract influential and wealthy foreigners to become members of the club.

"Aggressively begging foreign countries to funnel money straight into Trump's pocket is a clear violation of the Constitution's emoluments clause, but that's precisely what the State Department is doing by openly promoting one of the Trumps' private businesses," Shripal Shah, vice president of American Bridge, a Democratic firm, told CNN. "It's a gross abuse of taxpayer resources and flagrant violation of the law from an administration that thinks rules don't apply to them."

The blog post additionally shared more details about Mar-a-Lago's unique history. The home was originally built in 1927 by cereal heiress Marjorie Merriweather Post. In 1973, Post donated the property to the government with the hopes it would be used as the "winter White House" for future presidents.

However, after several presidents refused to use the home the government gave the house back to her trust in 1981 because the cost of upkeep was too high. In 1985, Trump bought the property for a mere $5 million and turned it into a private club in 1995.

As Town and Country reported in its profile of the club, Mar-a-Lago is a profitable business, which Trump made $15.6 million on in 2014. He will continue to profit on it as president, especially through its newly increased initiation fees. Trump bragged to Town and Country, "I have 24 acres in Palm Beach and nobody has anything like that," but as reporter Sam Dangremond found, "The estate is actually 20 acres, but who's counting?"

Update: On Monday evening, the Trump administration deleted the State Department webpage promoting Mar-a-Lago and replaced it with a statement reading, "The intention of the article was to inform the public about where the president has been hosting world leaders. We regret any misperception and have removed the post."