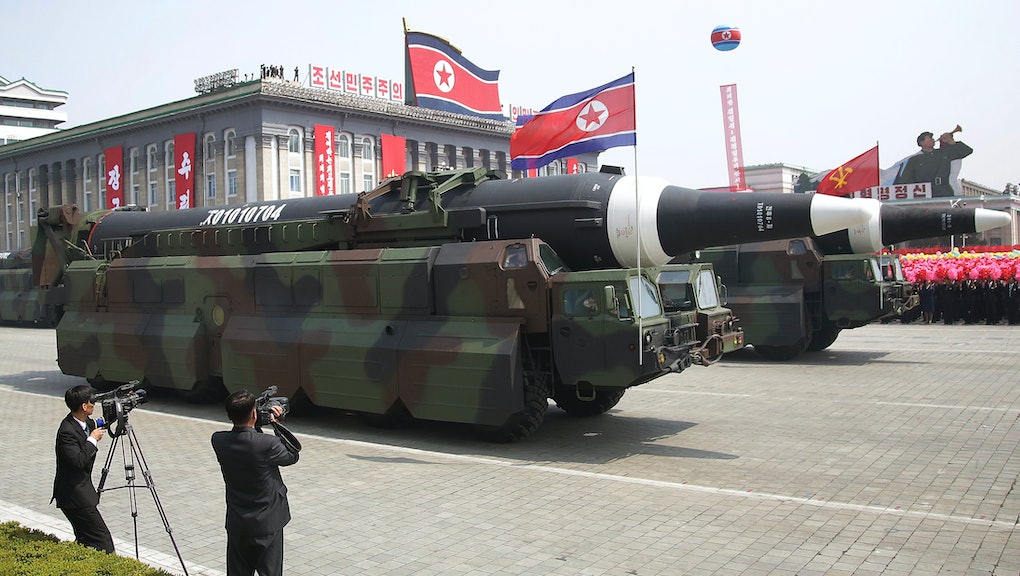 Can North Korea’s nuclear missiles really hit the US? Here’s what you need to know.

The U.S. must step up its anti-ballistic missile defenses in Hawaii to counter the growing threat posed by North Korea, the top military official in the Pacific told members of Congress on Wednesday.

"Kim Jong-Un is clearly in a position to threaten Hawaii today, in my opinion," Admiral Harry Harris told the House Armed Services Committee, McClatchy reports. "I have suggested that we consider putting interceptors in Hawaii that ... defend (it) directly, and that we look at a defensive Hawaii radar."

Since North Korea's most recent successful missile test in April, U.S. lawmakers have increasingly shown concern that the country's authoritarian regime may have acquired ballistic missiles capable of reaching Alaska, Hawaii or even perhaps the continental United States.

Most of the missiles North Korea has displayed publicly are short-range, according to an analysis conducted by the Nuclear Threat Initiative, a nonprofit that tracks threats from weapons of mass destruction.

The country's first test was of a short-range Scud B missile, with a range of 300 kilometers, or about 184 miles, in 1984. Of Russian origin, the Scud is perhaps most best-known for its use by Iraq against Israel and Saudi Arabia during the Persian Gulf War. North Korea has Scud C and Scud D missiles, with ranges of 500 kilometers (310 miles) and 700 kilometers (435 miles), respectively.

The distance from Pyongyang to Seoul is 195 kilometers.

Since then, Pyongyang has acquired missiles with longer ranges. The Nodong (or Rodong), which it first tested in 1993, has a range of 1,300 kilometers, or about 800 miles, putting it well within striking distance of South Korea and Japan, but still far from being able to hit the United States.

Recently, Pyongyang successfully tested a missile with a maximum range of 3,500 kilometers, or about 2,175 miles, which is within striking distance of Guam, a U.S. territory. In 2016, the North performed six tests of the Musudan missile, five of which failed. The sixth test, which succeeded, proved "a worrisome milestone, particularly if Pyongyang is able to mount its new compact nuclear devices on board the missile," according to the Diplomat.

North Korean state media touted the test as proof that the country could now attack U.S. interests in the Pacific.

In terms of missiles that hit the continental U.S., North Korea has displayed two varieties of what it claims long-range inter-continental ballistic missiles: the KN-14 and KN-08. Those ICBMs — or mockups designed to look like ICBMs — have appeared in parades, but haven't been flight tested and their reliability remains unclear.

"The reliability of an untested KN-08 is likely to be very low," Elaine Bunn, deputy assistant secretary of defense for Nuclear and Missile Defense Policy, said at a conference hosted by the Center for Strategic and International Studies in 2015.

"Our assessment is that they have the ability to put ... a nuclear weapon on a KN-08 and shoot it at the homeland," Admiral Bill Gortney, commander of the North American Aerospace Defense Command, said in a 2015 briefing at the Pentagon.

However, until the North successfully tests a KN-14 or KN-08, it's impossible to know whether it actually has the ability to hit the continental United States.