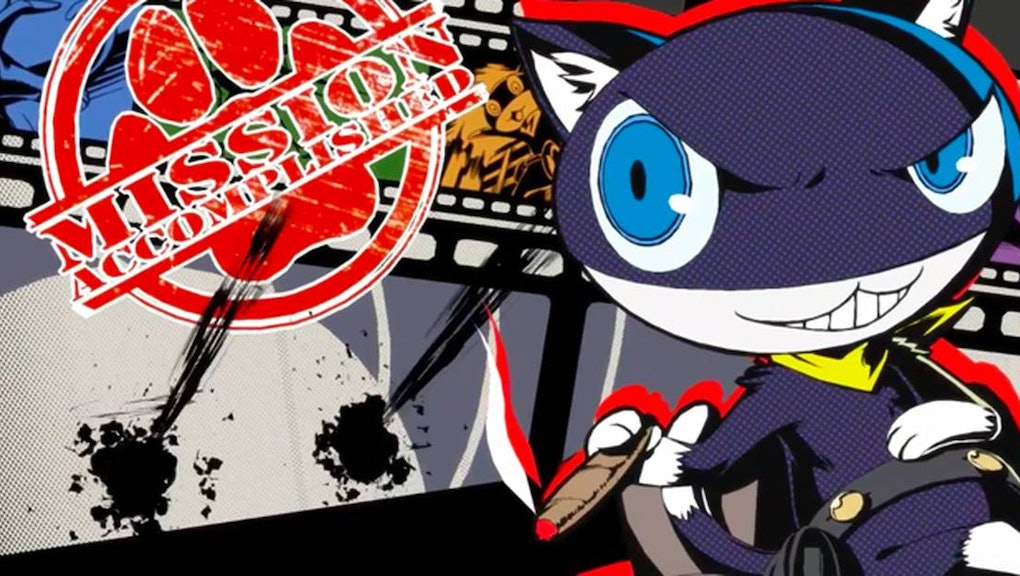 Persona 5's Morgana is an anthropomorphic cat that acts as your sidekick and guide to the palaces and dungeons you find yourself exploring. For better or worse, he's by your side throughout the whole of the game. Whether he's goading you to head to bed early or assisting you in battle, Morgana is a very useful member of your team who's always there to keep you on the right path. But who is Morgana, really? Get to the bottom of Morgana's mysterious past with our help (and thanks to Persona 5 Wikia.)

[Note: Beware of major spoilers for Persona 5's story below.]

Persona 5 Morgana: Who is Morgana?

Morgana appears to the party as a small black and white cat with blue eyes and white fur around his face, paws, and tail. He wears a yellow bandana and walks on two feet. He can turn into a regular housecat form at will, so as not to arouse suspicion or attract the attention of anyone from the real world when he accompanies you to school.

You originally meet Morgana in his catlike form in the first palace of Persona 5, on your way to thwart the reprehensible Kamoshida. From there, he joins you on his own personal journey to regain his lost memories of who (and what) exactly he is.

Persona 5 Morgana: What is Morgana's secret?

The draw with Morgana's story throughout the game is the idea of whether or not he's a human or a cat. He hates being referred to as a cat, and despite the fact that he has a traditionally feminine name, he insists he is male. His codename in the Phantom Thieves group is Mona, which undermines his push to be seen as masculine and tough.

Morgana is outwardly courageous and confident, but hides a very unsure and shaky personality deep down. Though early on he acts as the group's Navigator, he ends up leaving for a short period of time after a bout of jealousy for his replacement pushes him to "prove" he's better than the Phantom Thieves. He does end up returning, however.

Beyond that, Morgana does end up regaining his memories, and despite what may have been hinted at in the story, he's not a human at all, and never was one before. He was in fact created by the Velvet Room's Igor to assist the protagonist. Despite this revelation, however, it does not sour Morgana's resolve. He believes that even though he was not originally human, it's not out of the realm of possibility that he may still find a way to become one someday.

Now that you understand Morgana's origins, perhaps his actions will make more sense when you get back to playing. He's still an excellent helper, especially when he turns into a van.