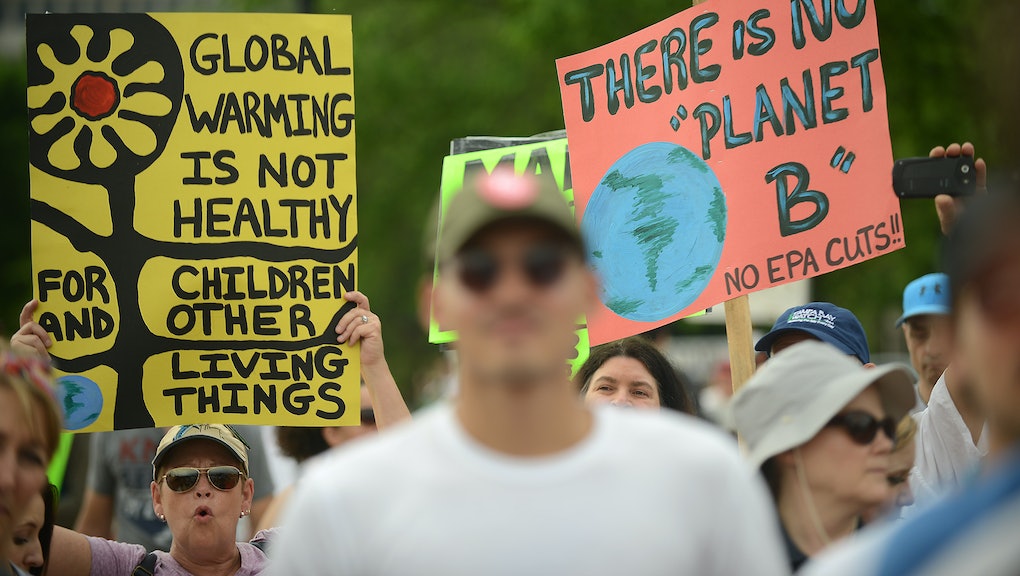 On Friday, The Environmental Protection Agency's website wiped most of the information pertaining to climate change and replaced it with a simple message reading, "this page is being updated."

The pages deleted from the site include information on the Obama administration's Clean Power Plan, the Washington Post reported, including fact sheets about greenhouse gas emissions. Additionally, a page explaining how climate change works was also removed after staying on the site for nearly two decades. It read in part:

Recent climate changes, however, cannot be explained by natural causes alone. Research indicates that natural causes do not explain most observed warming, especially warming since the mid-20th century. Rather, it is extremely likely that human activities have been the dominant cause of that warming.

That page was in direct conflict with anti-climate change statements made by Scott Pruitt, the EPA's new administrator.

In March, Pruitt told CNBC that he was skeptical of the role human activity has played in climate change. "I think that measuring with precision human activity on the climate is something very challenging to do, and there's tremendous disagreement about the degree of impact," Pruitt said. "So, no, I would not agree that it's a primary contributor to the global warming that we see."

Pruitt isn't alone in his beliefs. President Donald Trump has, on more than one occasion, shared his total disbelief that humans could possibly cause temperatures to rise. In fact, Trump has tweeted more than 50 times, Mic reported in March, that climate change must be a "Chinese hoax" or remarking on the cold New York winters and wishing for a "big fat dose" of global warming.

However, J.P. Freire, the EPA's associate administrator for public affairs, offered up an explanation for the missing information, telling CNN the agency simply wants "to eliminate confusion by removing outdated language first and making room to discuss how we're protecting the environment and human health by partnering with states and working within the law.

Actions like this are exactly why thousands of people took to the streets around the United States on Saturday to take part in the People's Climate March.

As the march's organizers explained on their site, the action is taking place to "show the world and our leaders that we will resist attacks on our people, our communities and our planet." The group additionally laid out its goals with the marching including, "directly and rapidly reduc[ing] greenhouse gas and toxic pollution."

At the Washington, D.C., rally, a Sierra club spokesperson told CNN the removal of climate change information from the EPA's site is "a sad reflection on the priorities of Donald Trump and EPA Administrator Scott Pruitt. If they haven't gotten the message yet, they're about to get it today. The American people want a government to fight for the health of this planet and for climate action to help protect all families in America."