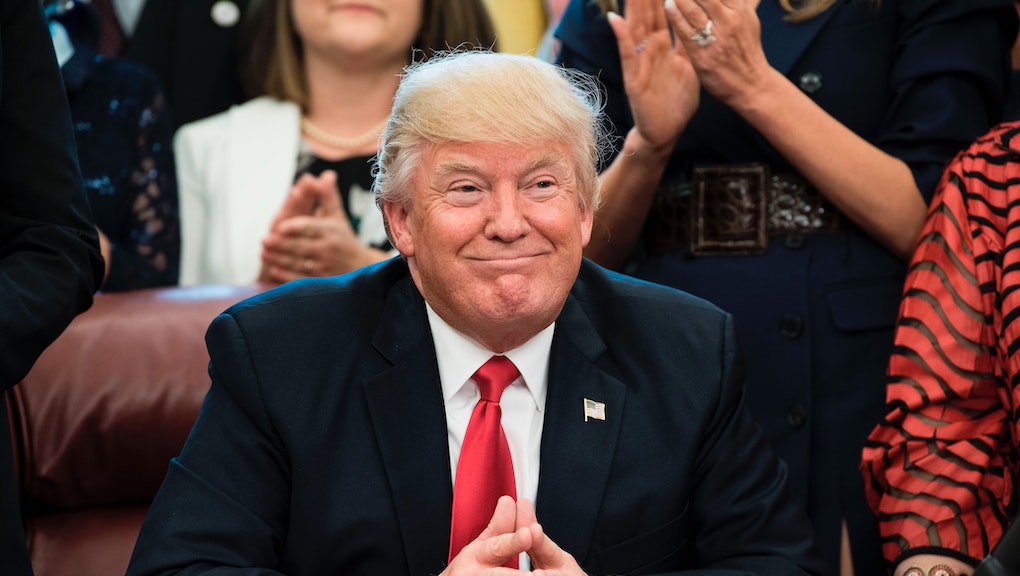 To mark his first 100 days in office, President Donald Trump released a glowing review of himself in the form of an op-ed published by the Washington Post.

"One hundred days ago, I took the oath of office and made a pledge: We are not merely going to transfer political power from one party to another, but instead are going to transfer that power from Washington, D.C., and give it back to the people," Trump's op-ed began. "In the past 100 days, I have kept that promise — and more."

"We asked for the piece and were happy to get it," Hiatt said.

In his op-ed, Trump touted his "success" at giving the country back to the American people — and above all else, bringing jobs back to the United States.

"The change began with the termination of the Trans-Pacific Partnership — a 12-nation pact that would have shipped millions more jobs to other countries," Trump wrote, adding that ending the partnership was only the beginning.

Trump said government agencies would continue to enforce the new "buy American" rules, which provide preferential treatment to U.S. companies that hire American workers. However, as Mic previously reported, the president doesn't appear to abide by his own rules. Trump's own line of shirts are made in China, Bangladesh, Honduras and Vietnam; Trump's eyeglasses, made in China; and Trump's home goods, made in Turkey, Germany, China, India and Slovenia.

In the op-ed, Trump also reiterated his strong desire to renegotiate the North American Free Trade Agreement, an agreement he called "the worst trade deal ever" during his presidential campaign. "We've lost nearly a third of our manufacturing jobs in the 23 years since that terrible deal was approved," he wrote.

However, according to the Council on Foreign Relations, NAFTA was a contributing factor in the tripling of North American regional trade from $290 billion in 1993 to more than $1.1 trillion in 2016.

With rather interesting timing — given thousands of people marched outside the White House on Saturday for the People's Climate March — Trump gloated, "We've canceled restrictions on the production of oil, natural gas and clean coal."

Trump also bragged about his role in ending sanctuary cities, fighting drug cartels and bombing Syria. He boasted about being the first president in 136 years to confirm a new Supreme Court justice in the first 100 days of an administration, but that was more a timing coincidence than an accomplishment. As Politifact reported, "The reality is that very few presidents are presented with the opportunity to appoint and confirm a new Supreme Court justice within their first 100 days. Other than Trump, just four presidents since 1900 have had that chance: Bill Clinton, Richard Nixon, Harry Truman and William Harding."

And, in perhaps the op-ed's oddest paragraph — published on the website of one of the nation's most-read newspapers — Trump blasted the mainstream media for allegedly "concealing" America's issues.

"The same establishment media that concealed these problems — and profited from them — is obviously not going to tell this story. That is why we are taking our message directly to America," Trump wrote in the opinion pages of the very definition of establishment media. "We have opened the White House doors to listen, engage and act. We've invited in labor leaders, factory owners, police officers, farmers, veterans and Democrats, Republicans and independents."

Hiatt, the Post editorial page editor, did not respond to Mic's second question about Trump's use of the paper's opinion page to attack the "establishment media."