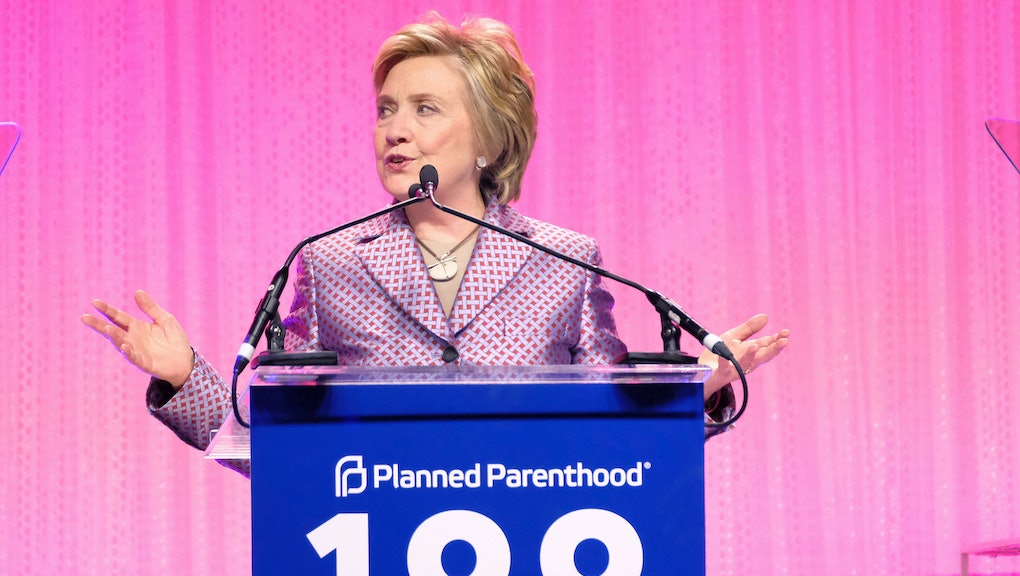 Hillary Clinton made headlines throughout the day on Tuesday, kicking things off at a Women for Women event in New York City, where she shared with CNN's Christiane Amanpour that she's confident outside forces cost her the presidency including Russian hackers, misogyny and the late-stage email review by FBI director James Comey. "If the election had been on October 27, I would be your president," Clinton said.

However, this wasn't the end of Clinton's media-filled day. On Tuesday evening, Clinton took to the stage at Planned Parenthood's 100-year anniversary gala where she was honored with the organization's "Champion of the Century" award.

The award was bestowed upon Clinton, Planned Parenthood explained in a statement, for her 40 years of service to women and girls in this country.

"As we speak, politicians in Washington are still doing everything they can to roll back the rights and progress we've fought so hard for over the last century," Clinton said, according to CNN. "I mean, could you believe those the photos of groups of men around that conference table deciding to strip away coverage for pregnancy and maternity care? This was a disturbing blast from the past."

In her speech, Clinton told attendees and Planned Parenthood supporters to remain vigilant. She even drew parallels between reality and the Margaret Atwood book turned Hulu show, "The Handmaid's Tale."

"We come tonight to celebrate the last 100 years, the progress that generations have fought so hard for. And what a time it is to be holding this centennial. Just ask those who have been watching 'The Handmaid's Tale,'" the 2016 Democratic presidential nominee quipped at the event. "I am not suggesting this dystopian future is around the corner, but this show has prompted important conversations about women's rights and autonomy."

Clinton went on to draw parallels between the show and modern day, explaining how on the show, and in real life, rights are not stripped away all at once, but slowly and methodically as to not be noticed.

"It is not too late for us. But we have to encourage the millions of women and men who support Planned Parenthood's mission to keep fighting," she said.

In the end, Clinton had four little words she wanted women and supporters of Planned Parenthood to remember: "Resist. Insist. Persist. Enlist."