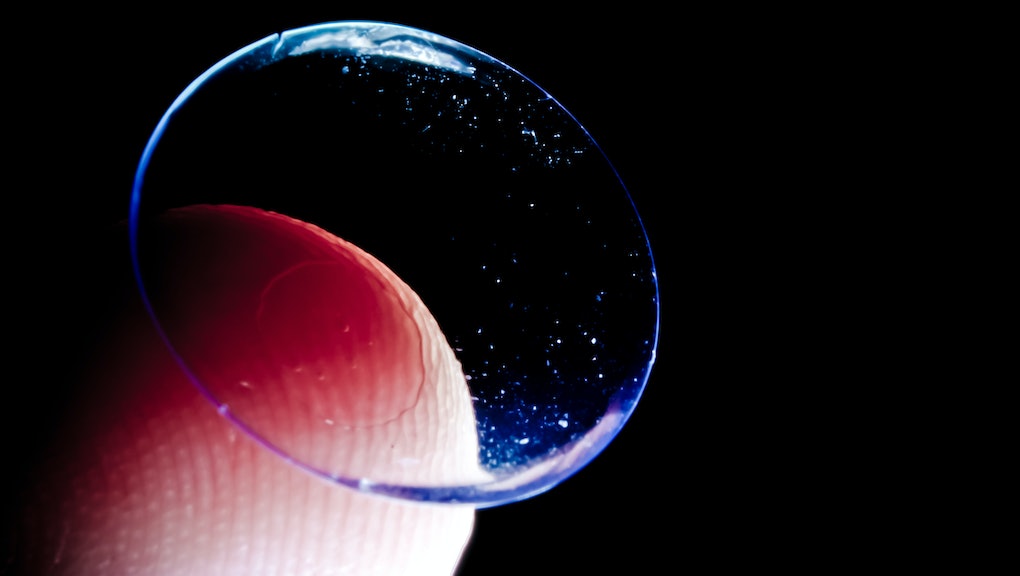 Your Fitbit or Apple Watch might help you stay active, but it probably can't save your life.

A group of scientists from the Ulsan National Institute of Science and Technology in South Korea figured out a way to make "smart wear" that could. They created contact lenses that monitor the chemicals in our tears for blood sugar levels, signs of glaucoma and possibly cancer.

"The concept [for smart contact lenses] has been drawn, but they're very difficult to make," said Park Jang-ung, a professor at UNIST and part of the research team, in a phone interview. He mentioned a scene from Mission: Impossible — Ghost Protocol where agent Trevor Hanaway puts on a robotic contact lens that can recognize faces in crowds. The ones from Park's team, however, arguably do something much more practical.

The lenses have a sensor and antenna made from spider web-like, stretchable fiber, and they collect information from the wearer's tears before sending it wirelessly to a monitor about the size of a small television. It's the first-ever smart contact lens made using soft, transparent materials, and it could help diabetes patients monitor their blood sugar without pricking their fingers or help the glaucoma-prone keep track of their eye pressure. Information about its abilities to detect cancer, however, are still unclear.

"It's kind of confidential right now, but we know we can monitor some kinds of cancers," Park said.

Just creating the glucose and glaucoma sensors took about four or five years, according to Park, but now the lab's attention can shift to making the monitor more transportable. They're aiming to connect the lenses to smartphones within the next few years, which would no doubt be convenient, but perhaps also worrisome. In a time of fear for what hacking could do to self-driving cars, imagine your comprehensive medical data being up for grabs.

With that said, a hacking incident is mere speculation, and the lenses are likely to bring more than just medical benefits — they could mark a huge inroad for augmented reality, too. Think Google Glass all over again, but this time right on your eyeballs.

"We're working to integrate small displays inside the contact lens now," Park said. "So, hopefully, this year or next year, we can finish the research."