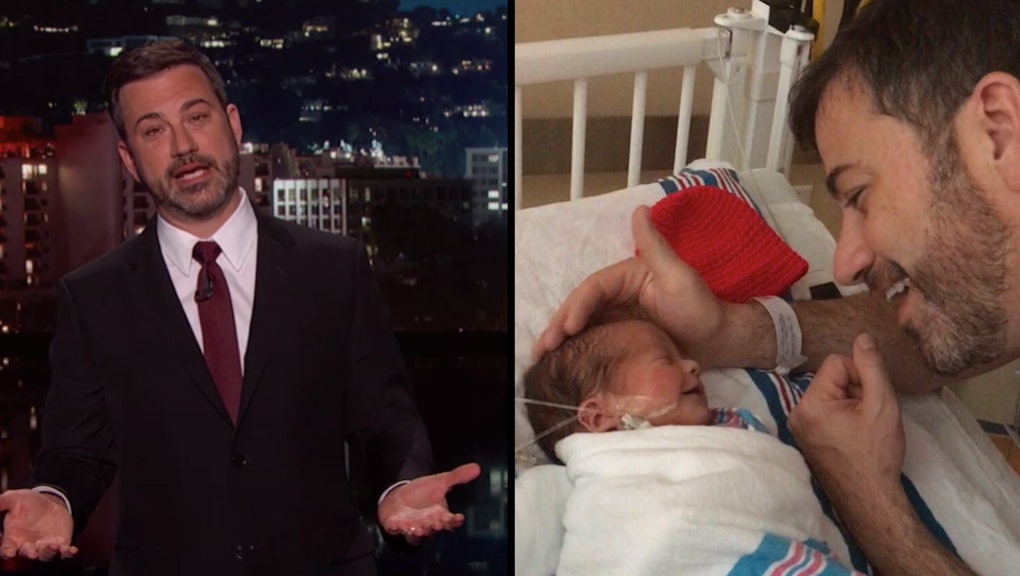 Dr. Evan Zahn has been practicing medicine for 30 years, and during that time, he says, he's treated "thousands" of newborn babies with congenital heart diseases. One of them happened to be Jimmy Kimmel's newborn son, Billy. Kimmel mentioned Zahn in an emotional monologue on Monday, during which the comedian shared his own story and included a powerful plea for health care access for all Americans.

Now Zahn, who treats patients like Kimmel's newborn — babies who need lifesaving surgery within their first few days of life — is speaking out about what's really at stake regarding the Republican health care act that passed in the U.S. House on Thursday and is now headed to the Senate.

Zahn, a military veteran who currently serves the director of the Guerin Family Congenital Heart Program at Los Angeles' Cedars-Sinai Heart Institute, works to develop new procedures and techniques to treat patients with congenital heart disease. But, he said in a phone call on Thursday, he just happened to be on call the night that Billy Kimmel was born.

But he also said that, while the "sentiment" of Kimmel's monologue was correct, the reality of health care for children with congenital heart defects is "a little different than what everybody heard on TV the other night."

"If you're born in a hospital and you have a heart disease, you get treated in the United States," Zahn said. "It really doesn't matter what your insurance is."

But there is a "real issue," Zahn said, with the way babies born with congenital heart diseases were treated when they aged out of their parents' insurance and tried to get coverage for themselves — at least before the Affordable Care Act was passed.

The danger, Zahn said, was that before the ACA went into effect in 2014, babies who had been treated for congenital heart defects grew up to be young adults with pre-existing conditions that disqualified them from procuring insurance.

"The minute they'd come off their parents' insurance, before the Affordable Care Act, we'd have an incredibly hard time getting our patients insurance," Zahn said. "Which is insane, I mean, what kind of country would think that's OK ... We invest millions of dollars in these patients, as a society, to get them to survive ... Then they survive, which is what we want them to do, and they can't have health care? It makes zero logical sense."

The ACA changed things for the better, Zahn said, adding that he thought it was "wonderful for our patients."

But now he's concerned that we could return to a time where patients grow up with deadlines looming over them after which they might not be able to continue to receive medical care, or that he might again have patients who rush to get surgeries for their children while they're still covered by their parents' insurance plans — even if it would be more medically sound to wait.

The Republican-proposed health care amendment currently headed to the Senate would gut the ACA's protections for people with pre-existing conditions, something Zahn believes could have a "profound negative effect" on his patients.

"This looming deadline of losing health insurance is a big issue and I'm scared it's coming back," Zahn said. "I think we're going to go back to a system where, in this country, which I believe is the greatest country in the world, but not when it comes to health care, ... we'll have tens of millions of people who are not insured. Which is not OK."

Zahn added that he's also concerned the Republican health care plan could result in less funding for essential research for he and his colleagues, and that it could freeze the progress needed to innovate new lifesaving procedures.

But the essential question at hand, he said, was "what we think the value of human life is," and whether the fact that a child needs expensive medical treatment means their life might not be worth saving.

"It's amazing to me that these same people who argue about the sanctity of life for a 9-week-old fetus would argue against a newborn baby because they're not born perfect, [because] they have a heart defect," Zahn said. "I think that's sickening."