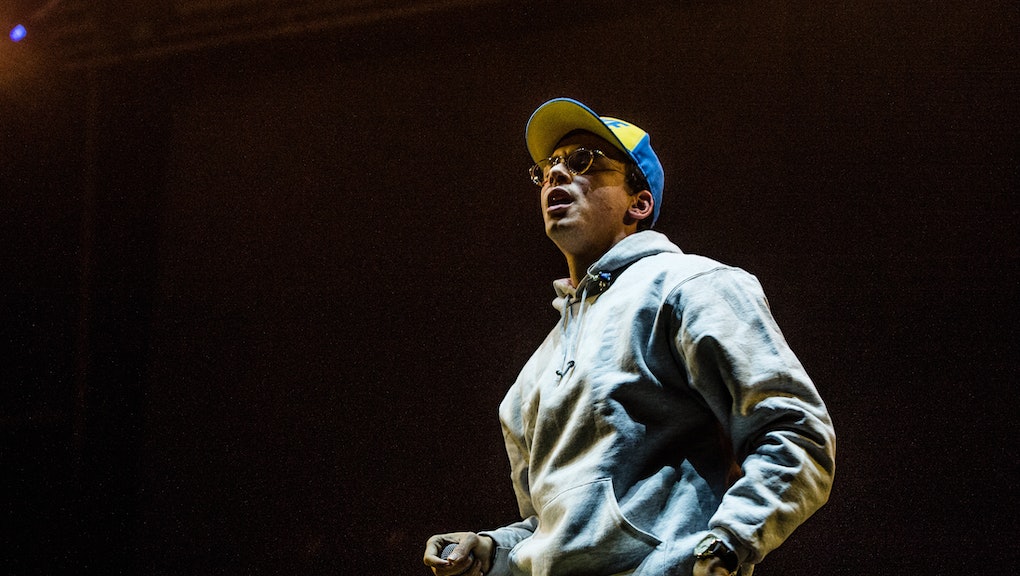 Logic dropped a new album on Friday, the highly anticipated Everybody, which features Black Thought, Alessia Cara and Killer Mike. While the album's gotten plenty of prominent promotion on Spotify, Twitter users are calling the rapper out for playing into the age-old trope of being a "tragic mulatto."

Logic is a 27-year-old biracial rapper — his mother's white, his father's black — from Maryland whose work has often grappled with issues of identity. But his new album's title track, "Everybody," certainly plays up how hard it was for him to navigate being a light-skinned biracial kid growing up in a black and white world. On the track, he calls himself a "house nigga" and raps, "In my blood is the slave and the master/ like the devil playing spades with the pastor."

The "tragic mulatto" archetype emerged in American pop culture during and directly following slavery. It often hinged on the sad lives of children born to black mothers who'd been raped by their white masters. But it also did the work of subtly reinforcing white supremacy. These children, the story often went in films and books, were caught between two worlds, and ached for the approval of their white relatives. That was certainly how it went in Harriet Beecher Stowe's 1852 novel Uncle Tom's Cabin and the hit 1959 film Imitation of Life.

The goal was to evoke sympathy — not for a rigid racial caste system that was upheld by law and custom, but for children whose parents, by choice or by force, dared to cross that color line. In turn, the tragic mulatto often evoked more emotion from white audiences than so-called "regular" black people, who were that much farther away from a white ideal.

The irony, of course, is that almost every black person in America has at least some European ancestry. Henry Louis Gates Jr., the Harvard professor whose work focuses on DNA, wrote for the Root in 2013 that the average African-American has 29% European ancestry, according to Ancestry.com's figures.

But the experiences of people along America's color line were deeply informed not by if they had European ancestry, but how much. Mike White, an assistant professor of genetics at Washington University in St. Louis, wrote earlier this year for the Pacific Standard that "African-Americans with a higher fraction of European ancestry, who often have lighter skin, had better social opportunities." But that privilege wasn't often told as part of the tragic mulatto's story.

That helps explain some of Twitter's reaction to Logic's new album:

In a rap world that's now unapologetically black, Logic's search for identity certainly stands out — but maybe not for the reasons he hopes.