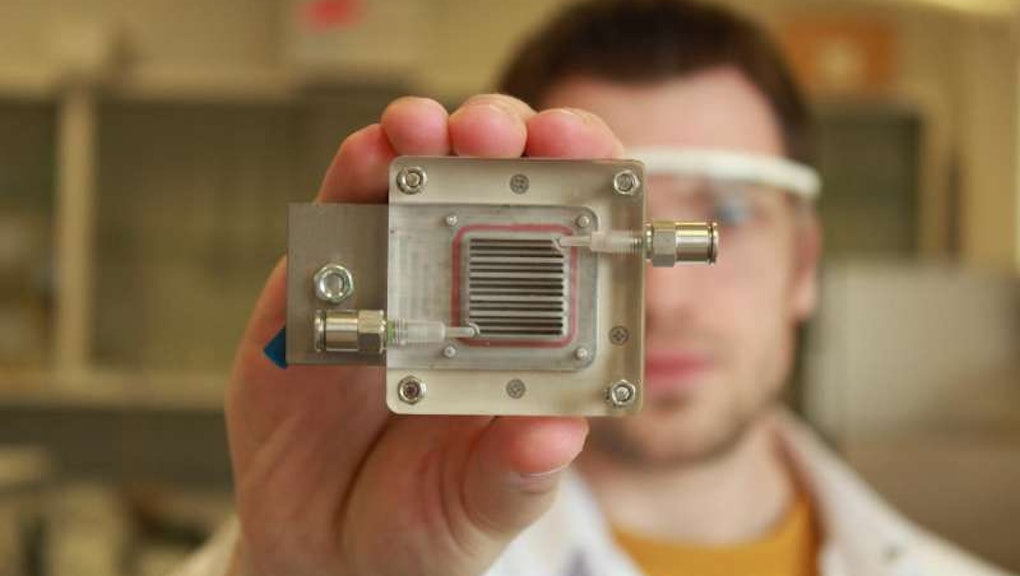 Scientists figured out how to convert polluted air into clean energy

In an era of growing concern for the environment, scientists in Belgium have come up with the groundwork for one possible solution: converting air pollution into power.

The device that can do it currently fits into the palm of a hand. It relies on solar power to convert polluted air compounds into stored hydrogen, a source of clean energy. It has two chambers separated by a membrane; one chamber cleans the air and the other generates the hydrogen gas. Air with a higher concentration of pollutants ultimately creates stronger electrical currents.

This could be good news for cities such as Beijing, Delhi, India and Los Angeles, among many others.

"The idea is that we're trying to develop technology that copes with polluted air — so you can clean your air and provide a clean living environment — while at the same time producing an alternative source of energy," Sammy Verbruggen, researcher and professor at both the University of Antwerp and the University of Leuven in Belgium, said in a phone interview. "But this is just the first proof of concept."

Even so, the technology is possibly a breakthrough that could transform how the planet and its major players tackle issues of pollution — and therefore health — plus the baggage that comes with fossil fuels.

Air pollution is a global crisis, and the path forward is difficult

China and India are in the throes of both a materializing energy crisis and a serious air pollution problem. Across the planet, air pollution caused 5.5 million people to die prematurely, and more than half of those deaths happened in India and China.

Meanwhile, power supplies can fall short. An estimate 240 million people in India don't have access to electricity, according to a report from the International Energy Agency, and China has been struggling with fuel-shortage costs and rising prices that leading to mandatory power rationing to industrial businesses. Of course, the problem isn't as simple as switching to hydropower: One great barrier to entry for using hydrogen-based power on a large scale across India is the high upfront cost of it, as the IEA report points out. Cost and infrastructure need to be factored into the equation as well.

That's where this device comes in

Another possible application could be reducing pollutants from specific problem industries, rather than entire cities themselves.

"For instance, if you go to the textile industry, I can imagine they have to deal with some very big waste streams," Verbruggen said. "If you can use [this] to purify waste gases, then the industry can always meet environmental regulations."

There are no clear-cut answers, but this new device could move the world one step closer to having options.

"There's still a lot of work to do to make this applicable to daily life. It's not like we discovered the holy grail yet," Verbruggen said. "But this is a new field of opportunities."