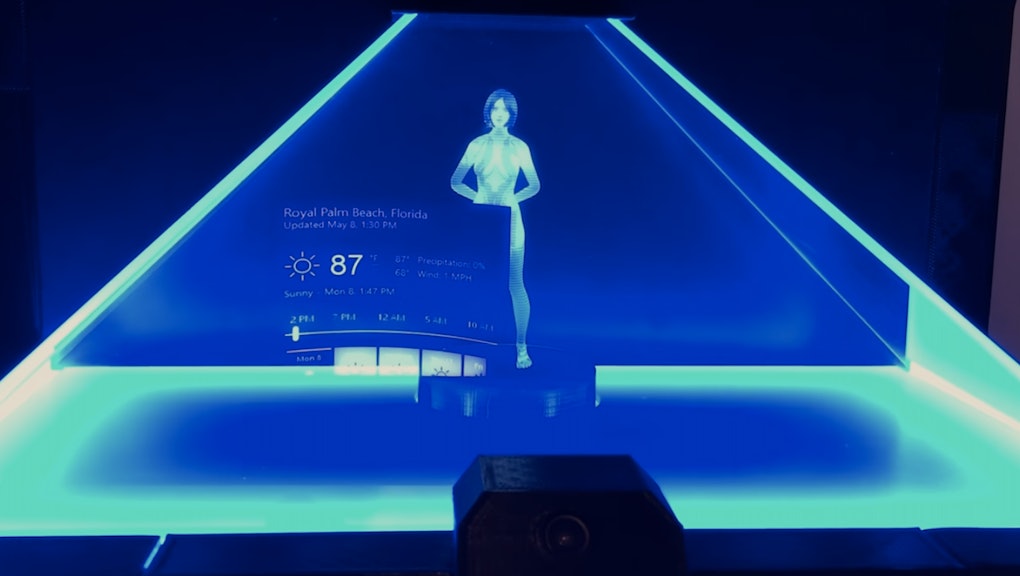 Many of us have already come to know the disembodied voices of personal assistants like Apple’s Siri or Amazon’s Alexa, but now a software engineer has finally put a face to a name.

Jarem Archer, who works as a consultant through his business, unt1tled, created a hologram device to match Microsoft’s Cortana personal assistant from Windows 10. She’s just like Cortana the Halo character, which Microsoft based its own on — she’s a slightly translucent, blue-light babe with a hip-waist-bust ratio that exposes her origins in the world of gaming. But Archer’s Cortana is 3-D and paces around inside a pyramid prism that rests on a table. In his demo video, he asks Cortana if he’ll need an umbrella, and she then pulls up a graphic with the temperature and assures him that it’s “probably not necessary.”

“I’m just kind of seeing where this goes,” Archer, 33, said in a phone interview. He says he spent at least $1,000 to create the hologram after deciding to bring some sort of personal assistant to life. “It took me four months to build it. It was a project that, in between doing consulting, I would throw a little time into.”

How he built the hologram

Archer used a “Pepper’s ghost” illusion technique that dates back to the 19th century, which is frequently used in holograms today. It basically means an overhead projector beams an image onto a reflective floor surface, and that image then bounces off of an angled panel to create an illusion of a 3-D figure.

He built the pyramid structure in parts using a 3-D printer, mounted a microphone and speaker onto it, then created a customized software that communicates with Microsoft’s servers and delivers the same Windows 10 Cortana to the device. To model hologram Cortana’s movements, he filmed his wife with two dual Kinects and captured two angles of her walking back and forth or trying various hand gestures.

“It probably took an hour or so,” Archer said, with a slight laugh. “She was very helpful, but she probably didn’t how how many takes [we were going] to do.”

He laid out the step-by-step process on his website, and will likely ask his wife to wave and make salutes for motion capture in the near future.

“I want to tighten up how it looks and work on more animations” he said. “I hope to someday make an actual product that I’d want to keep on my kitchen counter or on my desk.”