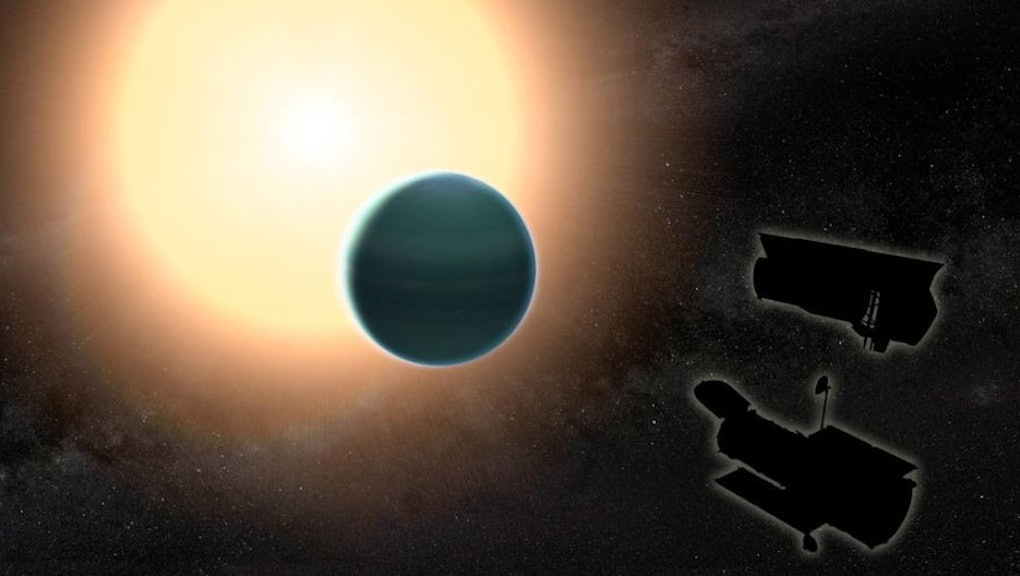 Scientists just discovered HAT-P-26b, a Neptune-sized planet with water in its atmosphere

About 430 light-years from Earth, in a separate solar system, lies a Neptune-sized planet that has water in its atmosphere, according to a team of international astronomers. A detailed study from University of Exeter researchers has discovered a "primitive atmosphere" that could shed light into how planets form similarly and differently in other solar systems.

Officially named HAT-P-26b, the planet is referred to as "Warm Neptune." And for a valid reason: It is similar in mass, though larger in radius, to the planet Neptune in our solar system but much warmer in temperature since it orbits closer to its sun. The study, published in the journal Science, made three notable findings: The exoplanet has an atmosphere made up almost entirely of hydrogen and helium, it has a relatively cloudless sky and it has a strong water signature.

"This exciting new discovery shows that there is a lot more diversity in the atmospheres of these exoplanets than we have previously thought," professor David Sing of University of Exeter said in a statement.

To study HAT-P-26b, the researchers used six sets of "transit" data — transits are when a planet passes in front of its host star — from NASA's Hubble Space Telescope and NASA's Spitzer Space Telescope. When a planet passes in front of its sun, a fraction of starlight gets filtered through the planet's atmosphere. Depending on the concentration of chemicals present in the atmosphere, some wavelengths are absorbed and others are not. Working backward from the wavelengths that are absorbed by the atmosphere — thereby missing from the data — can tell researchers about which chemicals are present in a given atmosphere.

This data is also used to determine the "metallicity" — the concentration of elements heavier than hydrogen and helium — on a given planet. In our solar system and two planets outside our solar system, the general trend observed among the gassy planets is that larger planets have smaller amounts of heavy elements. Take Jupiter, for example, which has a metallicity that's five times that of the sun versus Neptune, which has a metallicity that's 100 times that of the sun.

But this train of thought was invalidated with HAT-P-26b, which is a relatively smaller planet. In theory, it should have had a higher metallicity, like Neptune, but its metallicity was 4.8x that of the sun. This makes it more similar to Jupiter than Neptune when you consider atmospheric metal concentration.

"This is providing insight into how planets could form and evolve different than our solar system," Hannah Wakeford, an astrophysicist at NASA's Goddard Space Flight Center and co-lead of the study, told the Los Angeles Times. "And that really tells us about how unique or easy it is to form a solar system like our own."

An earlier version of this article said HAT-P-26b was in a separate galaxy instead of solar system.