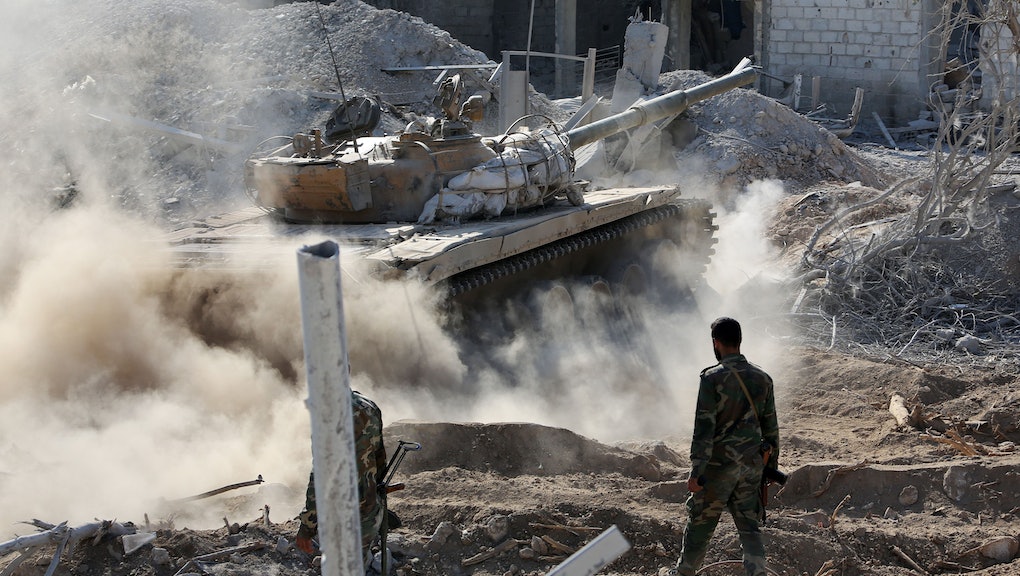 US officials accuse Assad regime of killing thousands of Syrians, burning their bodies

Trump administration officials say Syrian President Bashar al-Assad's military forces have killed thousands of war prisoners and burned their bodies to cover it up, according to new reports.

In a Monday press briefing, the State Department told reporters the Syrian government has been hanging roughly 50 detainees a day at the Saydnaya military prison, located about 45 minutes outside Damascus, according to the Associated Press.

The State Department, which released commercial satellite pictures of what it claimed showed the construction of a modified crematorium in the prison complex, said the the bodies were being burned to hide the killings. The photographs spanned several years beginning in 2013.

Stuart Jones, top U.S. diplomat for the Middle East, told reporters the presence of a crematorium shows that Assad's regime "has sunk to a new level of depravity," according to the AP.

"We believe that the building of a crematorium is an effort to cover up the extent of mass murders taking place in Saydnaya prison," Jones said.

At least 407,000 people have been killed in the Syrian civil war since it began more than six years ago, according to the Syrian Network For Human Rights. The death toll includes 207,000 civilians, 24,000 children and 23,000 women.

The State Department did not immediately respond to Mic's request for comment.

The findings mirror the ones published in a February report by Amnesty International, which concluded Syrian operatives at the same military prison have hanged as many as 13,000 inmates between 2011 and December of 2015.

"These were all done in secret, not in public," Geoffrey Mock, Syria country specialist for Amnesty International USA, said in a phone interview. "The bodies were not released to the family members. They had to dispose of them in some way."

Lynn Maalouf of Amnesty International called the facility a "slaughterhouse," during a February interview with the AP. Surviving inmates told AP reporters the prison guards at Saydnaya would torture inmates, leaving dead bodies and pools of blood behind for surviving cellmates to clean.

Some surviving inmates said the prison's guards would walk up select inmates' cells and call them by name to be taken to their executions. Afterwards, medics would list the deceased's cause of death as "heart stopped," or "breathing stopped," before the bodies were taken to mass graves in Damascus, the AP reported.

"It just reiterates the importance of U.N. Security council and the U.N. in Syria in particular to allow independent monitors to investigate and report on this prison and get to the bottom of what happened," Mock added.