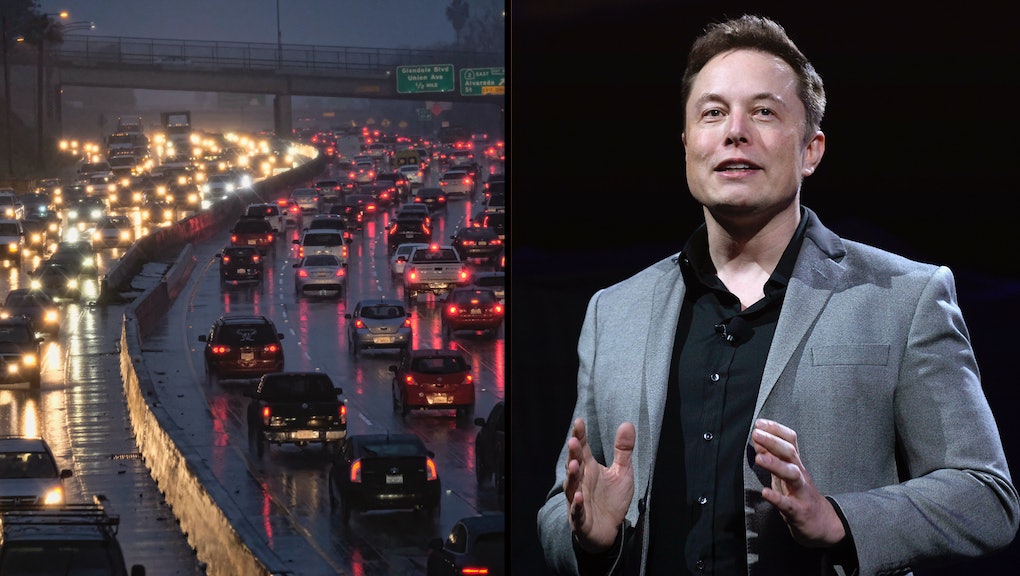 Elon Musk just revealed his vision for the future of transportation. It probably won't work.

Elon Musk's new-age tunnels — a futuristic combination of an amusement park ride and a coal-mine cart for your car — is exciting, but likely useless for fixing America's massive transportation problems, experts say.

By most measurements, the state of American transportation is quite grim. More than two miles in every five-mile stretch of urban interstates are so badly clogged with traffic that it cost an estimated $160 billion in wasted time and fuel in 2014, according to a 2017 infrastructure report card from the American Society of Civil Engineers.

On the other hand, U.S. transit is crumbling from serious neglect. Despite a 33% increase in transit passengers over the last two decades, there's still a backlog of roughly $90 billion in maintenance and repairs, ASCE said.

Musk has claimed his "electric sled" would carry cars at 125 mph and automatically switch tunnels when needed. It would get passengers from "Westwood to LAX in five minutes," as Musk wrote on Instagram. But transportation experts aren't convinced we'll be riding it anytime soon.

"Who is going to pay for this? We are already in such a bad state with all the freeways we built in the 1960s," Norman Garrick, associate professor of civil engineering at the University of Connecticut, told Mic in an interview. "The technology might be there, but the socioeconomic aspects of it doesn't seem to be really thought out. He has a lot of great ideas, but not this one."

Musk's tunnel-boring machine is a reaction to the symptoms — mainly traffic — of a broken transportation system in U.S. cities. He announced his plans for the tunnel on Twitter in late 2016 because traffic was "driving [him] nuts."

But Musk's vision to reduce traffic is part of a greater trend: The U.S. has encouraged driving for far too long, to the point where a full-blown dependency on automobiles has mistakenly shifted our attention to fixing road congestion.

Though Musk's tunnel looks like it carries cars on a lift, which could limit congestion underground, it's arguably just another road for cards to fill. Building more roads invites more vehicles into the mix and doesn’t necessarily alleviate traffic. One study from the National Bureau of Economic Research found a nearly "one-to-one relationship" in how much more traffic U.S. cities experienced when roads were expanded. In other words, if road capacity went up by 10%, traffic also increased by 10%.

"Allowing more people to drive creates induced demand, which creates a never-ending scenario of needing to build ever-increasing roads," Brooks Rainwater, director of the Center for City Solutions in Washington, D.C., told Mic in an interview. "By getting people out of personal automobiles, you're able to open up cities for the people, which is frankly what cities are for."

Both Rainwater and Garrick believe cities should instead invest in public transportation, walkable sidewalks and safe bike lanes. There's obvious benefits in putting transit infrastructure first, as it's better for the environment, better for our health — imagine all those extra steps you'd get by walking to the bus stop — and can build a sense of community. Every $1 invested in public transportation generates around $4 in economic returns, according to the American Public Transportation Association.

"I think the prevailing thought [among experts] is that we are overly dependent on cars in America," Garrick said. “We need to give priority to walking up at the top, and biking at second."

There's also the reality that supporting cars in the city means making more room for parking spaces and garages, plus spending billions more on maintaining road infrastructure. A 2014 report from the U.S. Department of Transportation estimated that all levels of government would collectively need to spend between $123.7 billion and $145.9 billion annually to maintain the condition of roads and bridges — but just $24.5 billion every year to improve rail and bus systems.

How did we even get here?

There was a time when the U.S. heavily invested in transit. Boston's historic green line trolleys shuffled people into the lush Public Garden starting in 1897. New York City, home to one of the world's largest subway lines, opened its rails in 1904, and Philadelphia followed in 1907.

But the shift to cars really has its roots in American modernism, a movement that began as early as the turn of the 20th century and picked up noticeable momentum after World War II.

The movement argued that it made no difference if a destination was a five-minute walk away or a five-minute drive. Roads were built en masse, cutting through critical points in cities and destroying entire neighborhoods. Building homes in the suburbs — where land was cheap and untouched — became especially appealing for car owners. At the same time, manufacturers started to shift their attention from war goods to automobiles.

"[Modernists] were saying that the fabric of the city is not so important," Ian Lockwood, a livable transportation engineer at Toole Design Group, told Mic. "What’s important is getting from A to B. That allowed highways to be built through neighborhoods and through cities. We had sort of this disorganized, ad-hoc transportation system that wasn't framed around a structure of transit or rivers or what's proximate to the downtown. So people started traveling in every direction, farther and farther."

It's not that President Franklin D. Roosevelt's plan to build highways spanning the U.S. was a bad idea, or that those who buy into hot-rod culture are ruining the country. It's more that people who couldn't afford cars were disadvantaged and ignored — as they often are today — and that many cities were ripped up and redesigned to prioritize the car.

"Modernism assumes anyone can afford a car," Lockwood said. "That's a big problem — this whole equity issue." In other words, modernism shaped some cities into impossibly difficult places for those without a car.

The future of cities

Unless various levels of government work together and reprioritize public transportation, little may change.

Rainwater imagines a future where cyclists can safely pedal in the city streets, where more people walk to work and where the "first- and last-mile problem" is solved by autonomous ride-share vehicles. That means using self-driving cars to close the gap between a train stop and someone's house or a bus stop and someone's final destination, which will inevitably take people off roads and lessen traffic for drivers, Rainwater said.

"[Musk's] boring experiment is more of a future that people thought of in the past," Rainwater said. "The American automobile still has a future, but in many instances — particularly in cities — we will move toward mobility as a service."

"[Musk's] boring experiment is more of a future that people thought of in the past." — Brooks Rainwater, Center for City Solutions

Basically, as it did in the 20th century with modernism, culture is shifting yet again. But America's transportation problem is bigger than inventing cool, futuristic devices that are faster and better than the last. Each city is its own puzzle of infrastructure, and it should be altered with its citizens in mind.

"You can't think about transportation as just moving stuff," Garrick said. "That's really putting you on the road to failure."