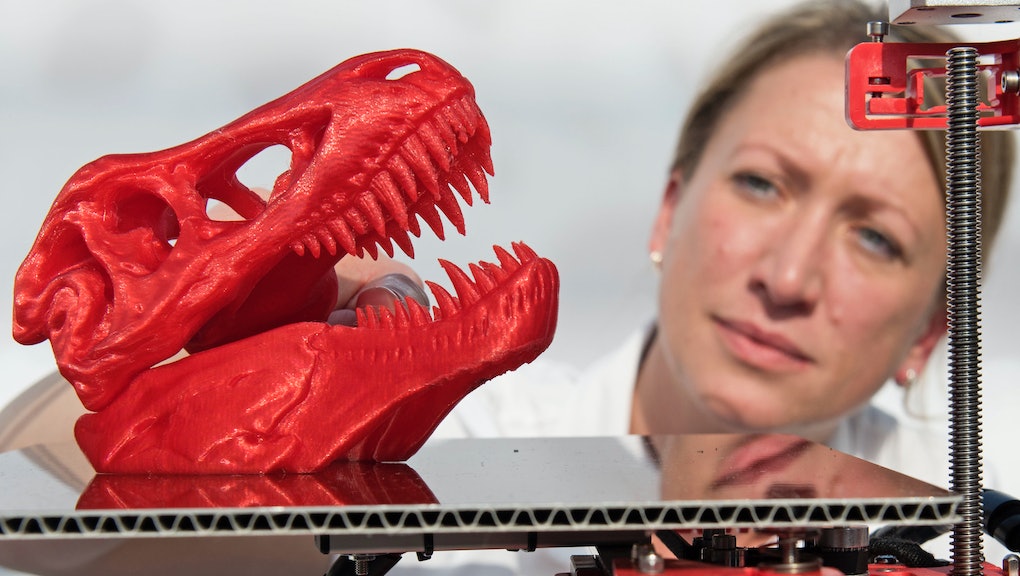 We're living in an era of newfound creativity thanks to 3-D printing. The tool's recent popularity has spurred incredible works of art — everything from custom-made shoes to a 3D-printed house — but the real excitement may lie in how this tech could transform the quality of our lives.

Here are five inventions that could redefine our future.

A translator that can convert text to braille

Tactile, an all-women group of six MIT undergrads, designed and 3D-printed a device that can translate the written word to understandable braille.

Braille uses raised dots to represent letters, and Tactile's device has motors that raise tiny pins, allowing people with blindness to read a paragraph at a time. When placed on top of a book or a piece of paper, the device takes a picture, uses text-recognition software to identify the letters and then raises pins to match them. Six letters can be displayed at a time, then the user must hit a "next" button for more.

In the near future, Tactile hopes to create a version with slightly smaller pins and more letters to read at once. But the current device could still improve somebody's day-to-day life.

"A lot of printed text isn't very accessible for people who are visually impaired," Grace Li, a 22-year-old mechanical engineering major at MIT, said in a phone interview. "Imagine if you get an agenda during a meeting or if you’re in a restaurant and get handed a menu."

Ovaries that can support life

Someday, hopeful mothers who struggle with fertility might fix their problem with 3D-printed reproductive organs.

Scientists recently tested the artificial ovaries made of gelatin in a group of sterilized mice. Not only were the implants safely embedded into the mother mice’s bodies, but they also were able to restore steroid and peptide hormones, plus egg production in the mother mice. The result? The mice were able to ovulate and give birth to healthy pups.

“The goal of this project is to be able to restore fertility and endocrine health to young cancer patients who have been sterilized by their cancer treatment,” Teresa Woodruff, director of the Women’s Health Research Institute at Northwestern University, said in a video.

But "there are still some key steps that are needed to safely try this in humans," Monica Laronda, one of the study’s authors, told ResearchGate.

The next step is trying ovary implants on larger animals.

Scientists at Princeton University ordered a $1,000 3-D printer off the internet and used it to create an electronic ear. They printed the cells and nanoparticles (tiny particles), then embedded an antenna. Real cartilage cells are grown onto the bionic ear, truly creating a body part that could someday be implanted in humans.

"This ink is actually a living ink. It contains living cells," Lawrence Bonassar, an associate professor of biomedical engineering at Cornell University, said in a video describing 3D-printed ear cartilage. "It’s alive when we put it into the printer, it’s alive when it comes out of the printer."

Princeton’s bionic ear is actually capable of providing superhuman powers: it can pick up frequencies outside of what humans can naturally hear, including radio station signals.

Prosthetic arms cost thousands of dollars, and estimates for a regular prosthetic hand range from $30,000 to $50,000, according to e-Nable, a volunteer group dedicated to 3-D printing prosthetics. Meanwhile, 3D-printed hands could cost as little as $50.

For children, that means being able to change out prosthetics as they grow.

"Many families do not have the financial means, even with insurance, to keep replacing a traditional, outgrown prosthetic every couple of years," a report from the University of Pittsburgh reads.

Bionic skin that can feel touch

Researchers have been dabbling with artificial skin since at least the 1970s, but a lab at the University of Minnesota recently revealed that it constructed a skin-like “fabric” laden with sensors that can feel something as delicate as a human pulse.

It’s hasn't been printed directly onto the human body yet, but doing so could possibly help burn victims or diabetes patients who experience skin ulceration.

There’s at least one other possible application: "Putting this type of 'bionic skin' on surgical robots would give surgeons the ability to actually feel during minimally invasive surgeries, which would make surgery easier, instead of just using cameras like they do now," Michael McAlpine, the study's lead researcher, said in a release. "The possibilities for the future are endless."