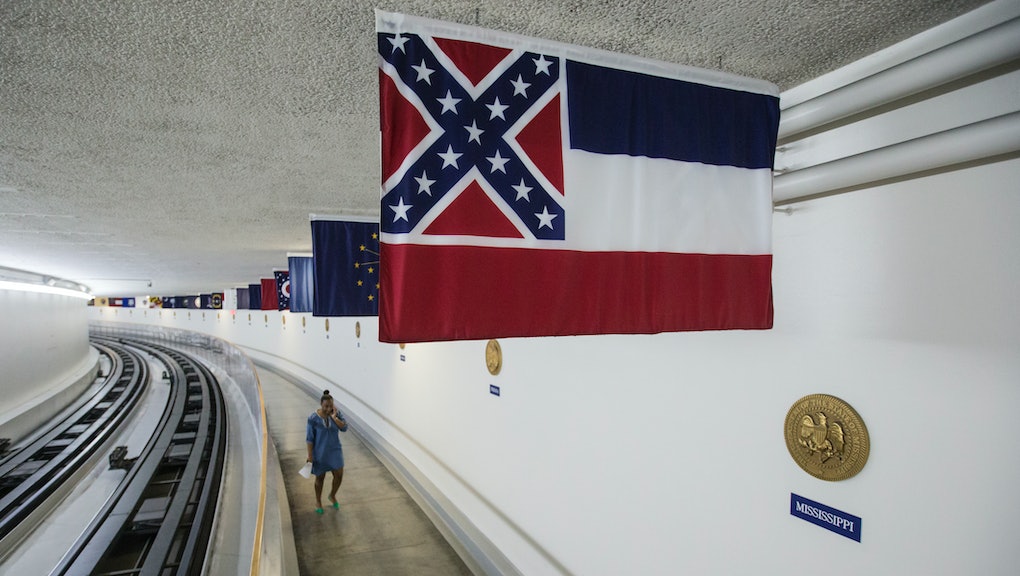 Mississippi state Rep. Karl Oliver learned of New Orleans' successful effort to remove Confederate monuments from public spaces, and the Republican lawmaker wanted to do one thing to the people responsible: lynch them.

"The destruction of these monuments, erected in the loving memory of our family and fellow southern Americans, is both heinous and horrific," the GOP politician wrote Saturday on his Facebook page.

The leadership in Louisiana "should be LYNCHED!" Oliver added. "Let it be known, I will do all in my power to prevent this from happening in our state."

On Friday, New Orleans Mayor Mitch Landrieu presided over the fourth and final planned removal of decades-old statues honoring the Confederacy. These monuments had been widely seen as symbols of racism and white supremacy, no longer deserving of prominence in a multiracial society, Landrieu said in a speech. Oliver took offense to Landrieu's sentiments, likening the "destruction" of the Confederate monuments to Nazism.

Oliver posted the message with a photo of a Gen. Robert E. Lee statue, which a New Orleans' construction dismantled on Friday. As of Monday morning, his Facebook post had drawn more than 700 emoji reactions, over 600 shares and upwards of 1,500 comments.

According to the Jackson Free Press, Oliver's message was "liked" by state Republican representatives John Read and Doug McLeod.

Oliver has since apologized for making the remark, according to The Clarion-Ledger. "I, first and foremost, wish to extend this apology for any embarrassment I have caused to both my colleagues and fellow Mississippians," the Mississippi lawmaker said in a written response on Monday.

The statement goes on to say the following:

In an effort to express my passion for preserving all historical monuments, I acknowledge the word 'lynched' was wrong. I am very sorry. It is in no way, ever, an appropriate term. I deeply regret that I chose this word, and I do not condone the actions I referenced, nor do I believe them in my heart. I freely admit my choice of words was horribly wrong, and I humbly ask your forgiveness.

The NAACP Legal Defense and Educational Fund also reacted to Oliver's statement, on Monday night. "Rep. Oliver's belated and, frankly, hard to believe apology does not undo the damage done by statements like this from those who purport to be leaders in our country," Sherrilyn Ifill, president and director-counsel of the civil rights law organization, said in a written statement. "His remarks demonstrate such a shocking level of recklessness that we must question his fitness for public office. During this volatile and dangerous time in our country, when hate crimes are at their highest levels in recent memory, we call on public officials to set an example of peace, respect, and care, and to exercise self-discipline when participating in conversations about this country's racial history."

Campaigns to remove symbols of the Confederacy aren't new. They gained steam in June 2015, after Dylann Roof, a professed white supremacist who collected Confederate symbols, killed nine black churchgoers at Mother Emanuel AME Church in Charleston, South Carolina. After Roof's capture, state lawmakers in South Carolina voted to move the Confederate battle flag that once flew on statehouse grounds to a museum.

May 23, 2017, 9:20 a.m. Eastern: This story has been updated with Oliver's apology and a statement from the NAACP Legal Defense and Educational Fund.