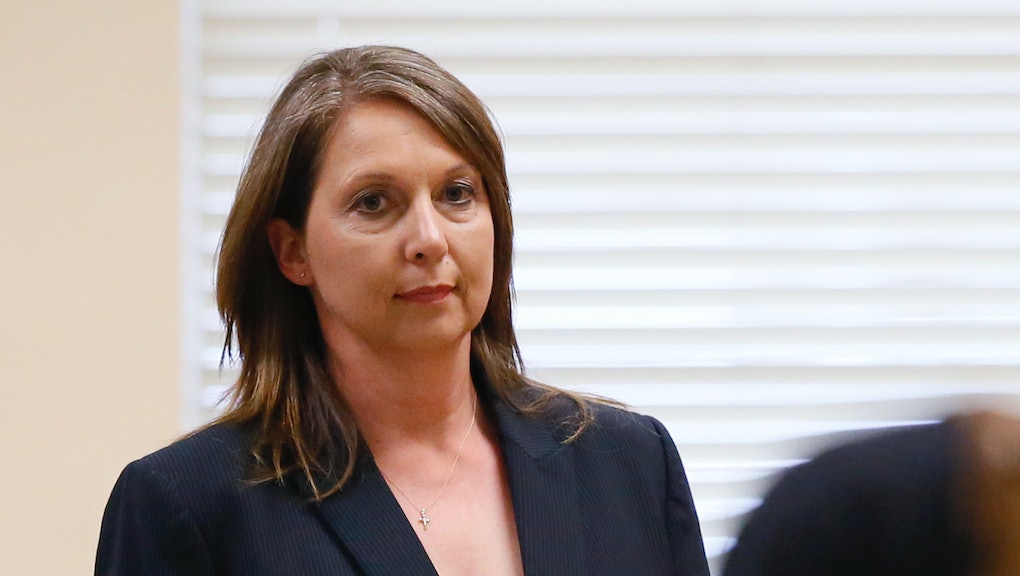 The 12-member jury — eight women and four men, including three African-Americans — had asked Drummond if they would be allowed to read aloud a statement to accompany their verdict. The judge told them no.

As the Crutcher family, the local community and national civil rights leaders reeled from the jury's decision, the jury foreman's letter explaining the jurors' findings became public. The letter, which has been published by several local news outlets, suggests the jury agreed with Shelby that Crutcher's race was not a factor in her decision to shoot him in September as he walked away from her and toward his stalled vehicle with his hands raised.

"The jury concluded that any officer put in that situation at that exact moment and regardless of the skin color, gender or size of the suspect, would have performed the same way, which is in accordance with their law enforcement training," the jury foreman, whose name does not appear in the letter, wrote.

The letter goes on to say that "many on the jury could never get comfortable with the concept of Betty Shelby being blameless for Mr. Crutcher's death." But the "rule of law" and the instructions they were given before 10-hour deliberations "forced" them to choose the not guilty verdict, the letter stated.

Read the foreman's full letter below.

Shelby shot Crutcher on Sept. 16, after coming across his stalled SUV on a north Tulsa roadway. She told jurors she'd pleaded with Crutcher to keep his hands visible and to stop walking toward his vehicle. The foreman's letter states that the jurors agreed with defense-presented evidence that suggested Crutcher was reaching into his vehicle and ignoring Shelby's commands to stop.

As Crutcher got within inches of the SUV, another Tulsa officer stunned Crutcher with a stun gun. Seconds later, Shelby shot Crutcher in the chest.

The shooting garnered national attention, in part, because of the way Crutcher was described over police radio. Crutcher looked "like a bad dude" who "could be on something," an officer in a helicopter, hovering above Shelby and Crutcher, was overheard saying. In an interview in April on 60 Minutes, Shelby denied that the unarmed man's race played a factor in her decision to shoot him.

Following the verdict, Shelby quickly left the Tulsa County courthouse with her defense attorney, Shannon McMurray. McMurray announced that Shelby would return to the Tulsa police force, although she would not be on patrol duty.

The verdict baffled members of Crutcher's family, who said after the verdict was read that Shelby "got away with murder." Dozens of local residents protested at the courthouse and at a nearby hotel late Wednesday night.

On Tuesday, the Oklahoma City chapter of Black Lives Matter and organizers of the Women's March called on the U.S. Department of Justice to file civil rights charges against Shelby. "Her acquittal and the decision to put her immediately back on the job is indicative of how a white woman's fear of a black man is considered an acceptable excuse," organizers said in a statement.

In the letter, the jury foreman lamented about how activists and members of the public too often misunderstand the role of a jury.

"I believe that I speak for the whole of the jury, when I say that the general public in these types of cases are unaware of just how specifically the rule of law dictates how a jury must reach a verdict," the foreman wrote.