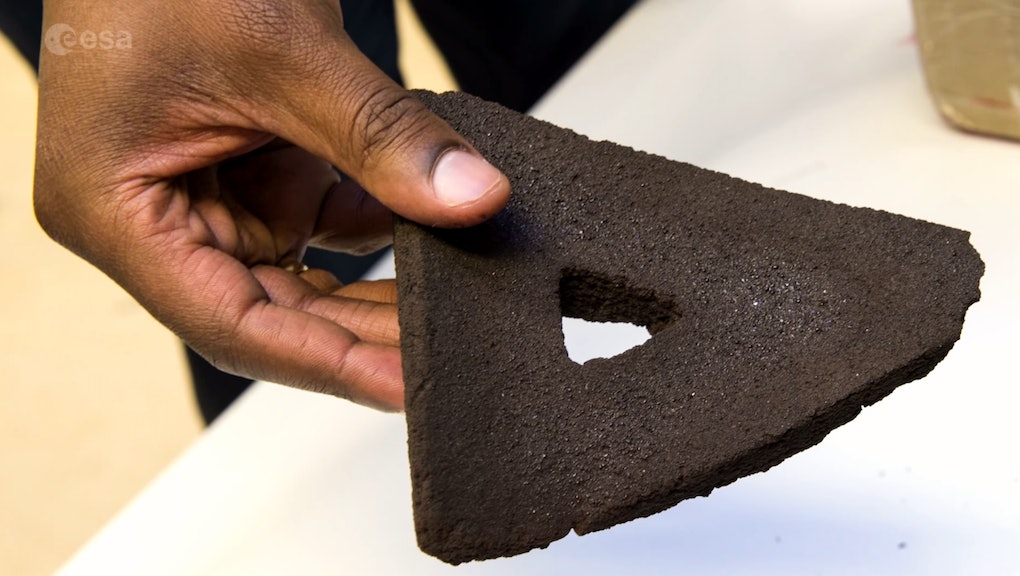 The bricks, created by European Space Agency scientists in Germany, are made of commercially available synthetic lunar soil and are baked with energy from the sun.

Scientists used a 3-D printer that laid out 0.1-millileter layers of lunar dust at a time, then used extremely hot temperatures — 1,800 degrees fahrenheit — to solidify the small bricks in a “solar furnace.” The whole process takes about 5 hours, meaning that architects of the future could possibly print their materials and build space huts in a matter of days.

However, the printing process may not be ready for prime time yet. A large and cumbersome wall of 147 curved mirrors, which looks to be about the height of a one-story building, is needed to aim the hot sunlight onto the moon bricks and cook them. The process is also somewhat weather-dependent — scientists had to use xenon lamps when sunshine wasn’t strong.

“For now, this project is a proof of concept, showing that such a lunar construction method is indeed feasible," Advenit Makaya, who oversaw the project for the ESA, said in a release.

Previous moon bricks constructed by the ESA used salt to bind the lunar soil, but this time around, there’s only one ingredient.

Should the idea ever materialize as true space huts, it'd perhaps be the most sustainable approach to building a moon colony that scientists have thought of yet.