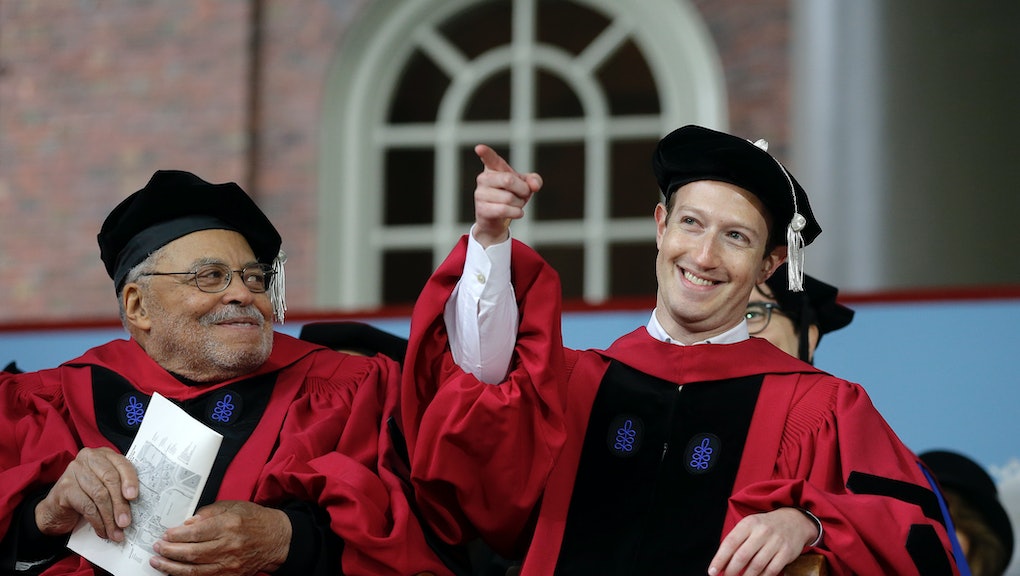 A little over a decade ago, Mark Zuckerberg dropped out of Harvard University to pursue his dream of building his little startup called "The Facebook." He returned to his alma mater on Thursday to give a commencement speech and finally collect a degree from the prestigious university, albeit an honorary one.

In his speech, Zuckerberg shared a few key pieces of wisdom from the real world that the grads will soon be entering and even shared a little dating advice for the class of 2017. But his speech didn't stop there.

Zuckerberg, a man worth an estimated $63 billion, additionally shared his views on the future and the economy and what he believes it will take to fix it. According to Zuckerberg, the answer is universal basic income.

"We should have a society that measures progress not just by economic metrics like GDP, but by how many of us have a role we find meaningful," Zuckerberg said in his speech, according to Business Insider. "We should explore ideas like universal basic income to make sure everyone has a cushion to try new ideas."

As Mic explained, universal basic income is an allocated payment that's provided to individual adults instead of households, regardless of other sources of income and with no requirement for work.

While controversial, the idea has seen a number of high profile supporters come out of the woodworks including Andrew Ng, co-founder of Coursera, and Tesla founder Elon Musk, who told CNBC that universal basic income may soon become a necessity due to automation taking over most jobs. And it appears Zuckerberg agrees.

"You're graduating at a time when this is especially important," Zuckerberg said, according to the Washington Post. "When our parents graduated, a sense of purpose reliably came from your job, your church, your community. But today, technology and automation are eliminating many jobs. Membership in a lot of communities has been declining. A lot people are feeling disconnected and depressed, and are trying to fill a void in their lives."

But don't worry, Zuckerberg isn't expecting the government to be signing checks to every single American just yet. Instead, he said rich people just like him should be ensuring everyone has a fair shot at pursuing their dreams.

"And yes, giving everyone the freedom to pursue purpose isn't free," Zuckerberg said. "People like me should pay for it. Many of you will do well and you should too."