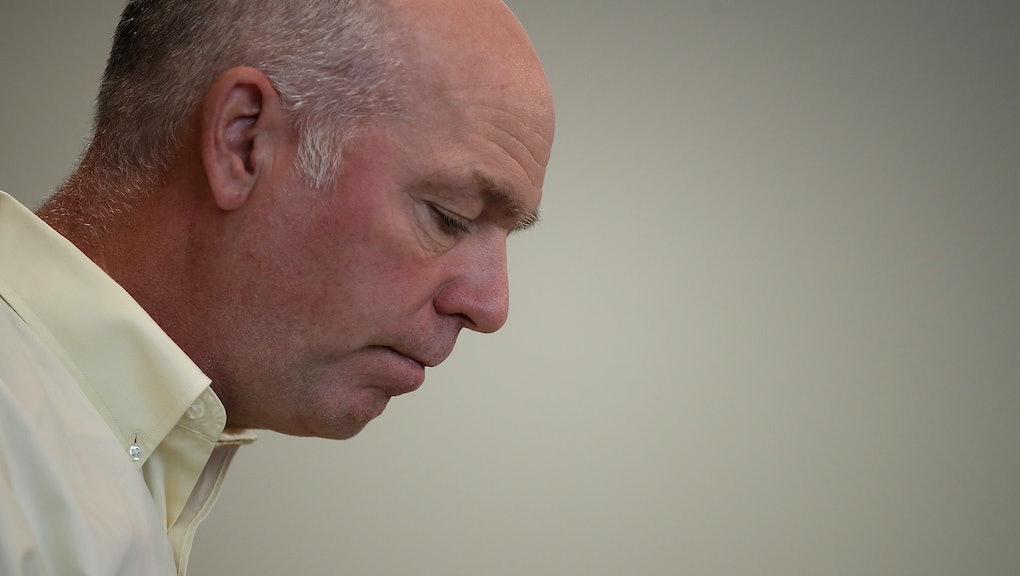 Will Greg Gianforte be convicted of assault? Here's what Montana criminal lawyers say.

Now that the election results are in, the question still remains whether Gianforte will be convicted of assault. Two Montana criminal lawyers contacted by Mic differed over whether it was likely to happen.

"Montana's assault statute is very broad," Brett Schandelson, of Tipp Coburn Schandelson P.C., said in an interview. The statute covers both threatening words and threatening actions. "It doesn't seem there's any dispute that he actually placed hands on Jacobs," he said. "It does appear that there's a prima facie case of assault."

Quentin Rhoades, another Montana criminal defense lawyer, said there might be ways for Gianforte to escape an assault conviction.

"You can't just strike somebody or push them because you're arguing with them," he said. "On the other hand, if they get inside your personal space, then that can vary based on the context. Especially if they're being obnoxious or aggressive, especially in Montana, there's going to be a justification for getting them out of your personal space."

In 2009, Montana updated its "stand your ground" law to make clear that a person threatened with physical harm has no duty to retreat before resorting to physical force. Rhoades said that if Gianforte could prove that Jacobs threatened to harm him, or that he thought Jacobs was likely to harm him, he might escape an assault conviction.

But tape of the altercation, as well as eyewitness statements, seem to suggest that Gianforte did more than just remove Jacobs from his personal space.

Alicia Acuna, Faith Mangan and Keith Railey of Fox News, who were present at the time, corroborated Jacobs' account. Acuna told the Guardian:

Faith, Keith and I watched in disbelief as Gianforte then began punching the man, as he moved on top the reporter and began yelling something to the effect of 'I'm sick and tired of this!' ... To be clear, at no point did any of us who witnessed this assault see Jacobs show any form of physical aggression toward Gianforte, who left the area after giving statements to local sheriff's deputies.

"If you're using more force than is reasonable in order to enforce your own right — and your own right is to be safe — and you go to the point where clearly you're safe and you're just getting a little bit of vindication or revenge in order to hurt someone because you're angry with them, you're not entitled to do that," Rhoades said.

Immediately after news of the incident broke, Gianforte issued a statement with a very different description of the events. "After asking Jacobs to lower the recorder, Jacobs declined. Greg then attempted to grab the phone that was pushed in his face. Jacobs grabbed Greg's wrist and spun away from Greg, pushing them both to the ground," Gianforte's campaign said.

But in order to argue self-defense, Gianforte must prove that Jacobs intended to harm him. "If he intends to claim self-defense, which the campaign statement seems to claim is their intent, he has to show Mr. Jacobs was imminently about to use unlawful force," Schandelson said.

Gianforte is scheduled to appear in court on June 7.