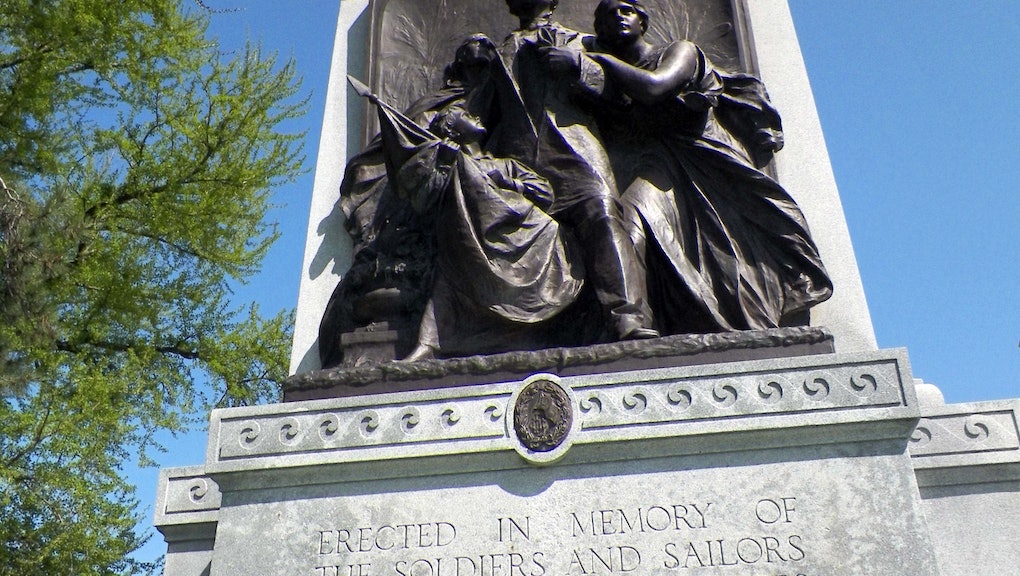 St. Louis wants to take down a Confederate statue. But residents will have to pay extra.

Elected leaders in St. Louis say they want to move a 103-year-old Confederate monument that sits in one of the city's public parks.

The catch? The city won't use taxpayers' dollars to do it.

If residents want to rid Forest Park of the symbol of racism and white supremacy, they can donate to a GoFundMe campaign started by St. Louis Treasurer Tishaura Jones. Over the last few years, two sitting mayors claimed the city simply can't afford to move the 32-foot-tall granite and bronze statue depicting Missourian families who sent their young men to fight for pro-slavery Confederate states during the Civil War.

"What do you do when you don't have the money? You launch a GoFundMe," Debbie Johnson, director of communications for the Office of the Treasurer of the City of St. Louis, said Thursday, repeating a statement Jones made to another outlet. "Treasurer Jones is the kind of person who is not going to let 'we don't have the money' stop her."

The "Take It Down St. Louis" campaign, created May 17 on the online fundraising platform, has garnered nearly $12,000 of its $25,000 goal as of Friday afternoon. While many of the contributions came from anonymous donors, Johnson said Jones recognized the names of many of the donors who chose to list them.

"[The campaign] has its roots in the local St. Louis community," Johnson said.

The name of the campaign is a play on "Take It Down NOLA," the activists collective in New Orleans seeking the removal of Confederate symbols and street names. In 2015, New Orleans city leaders voted to remove four monuments depicting generals of the Confederacy and memorializing a failed attempt to overthrow a biracial post-Civil War government. On May 19, the last of four monuments came down, all at the city's expense. In a speech, Mayor Mitch Landrieu said New Orleans had failed to acknowledge that "the cause of the Confederacy was wrong" for too long.

Jones favors moving the Forest Park monument into a museum, where it can be displayed in the proper historical context. When asked whether it was appropriate to ask residents, particularly African-Americans, to pay for the removal, the treasurer's office referred Mic to the mayor's office.

A spokesman for Mayor Lyda Krewson, who has supported the monument's removal, did not immediately respond to an interview request on Friday.

St. Louis — a city with a population of over 315,000 that is 44% white, 49% black and 3% Hispanic, according to the U.S. Census Bureau — has been a hotbed of social activism in recent years. The St. Louis area was key in the emergence of the Black Lives Matter movement, after the 2014 police shooting death of Michael Brown in nearby Ferguson, Missouri. Along with elected officials, BLM activists were among those who called for the monument's removal in 2015.

National efforts to have Confederate symbols stripped from public view had gained momentum, after Dylann Roof, a professed white supremacist who idolized the Confederacy's racist legacy, murdered nine black churchgoers at Mother Emanuel AME Church in Charleston, South Carolina, in June 2015. State lawmakers would later vote to move the Confederate battle flag that once flew on statehouse grounds to a museum.

Confederate legacy has been a divisive subject in St. Louis for longer than the 103-year-old monument has had a home in Forest Park. City leaders in St. Louis first approved the statue by ordinance in 1912, according to reappraisal report commissioned in 2015 by former Mayor Francis Slay. But it wasn't completed until 1914, having been stalled by "years of political controversy."

More than a century later, Jones' campaign has stirred up some controversy locally. On Tuesday, people for and against the Confederate monuments' removal protested near the landmark in Forest Park. On Wednesday morning, parks and recreation workers discovered the monument had been vandalized with spray-painted graffiti overnight; the workers have since cleaned the monument.

Some in St. Louis believe it's not just the one monument that needs to change. St. Louis Alderwoman Sharon Tyus recently introduced an ordinance that would allow the city to accept the money from Jones' donation drive to move the Confederate monument from Forest Park. The ordinance also directs the Department of Parks, Recreation and Forestry to create a list of all Confederate statues, memorials, monuments and battle flags located in St. Louis parks for their eventual removal; to change the name of the street where the Forest Park monument is located on "Confederate Drive"; and to prohibit the future installation of Confederate symbols in city parks.

The alderwoman's bill received a first reading by the full Board of Aldermen on May 19. Tyus did not return Mic's request for comment on Friday.

Johnson, the spokeswoman for Jones, said the majority of the calls and messages her office has received about the fundraising campaign have been supportive. "We don't need to have symbols of slavery and oppression in our public parks," Johnson said. "Just because the city doesn't have the money, that shouldn't be a roadblock."