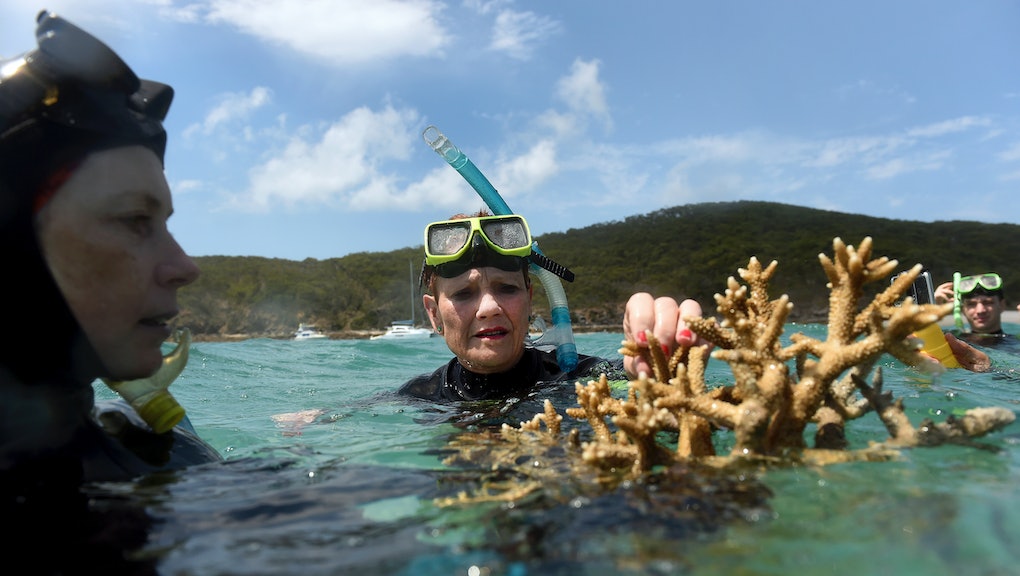 President Donald Trump could announce his long-awaited final decision on whether or not to pull the U.S. out of the Paris Agreement on climate change any day now.

The landmark environmental accord signed on April 22, 2016, by representatives from 174 countries went into effect on Nov. 4, four days before Trump won the presidential election.

Trump's tenuous position on the Paris Agreements has left its status in limbo ever since.

Since his tweet Saturday, reform advocates and opponents have weighed in, blitzing Capitol Hill with last-minute lobbying efforts.

Meanwhile newly unveiled research shows the growing effects of climate change are even more dire than many scientists initially suspected. Some of the repercussions are already irreversible.

It seems the stakes couldn't be much higher for the global scientific community or the planet. Here are a few reasons why.

The Great Barrier Reef is dying and probably can't be saved

Australia's once colorful and vibrant Great Barrier Reef is getting paler and dying faster than initially suspected, and new research reveals there's likely no way to save it now.

A 2016 survey study found up to 95% of the Barrier Reef had experienced bleaching related to warming water temperatures, according to the Telegraph.

Bleaching of the Reef's shallow water coral was at 67%, the study found. The Arc Center of Excellence called the findings the "largest die off of corals ever recorded."

Experts hired by the Australian government to help save the reef are now settling for conserving its "ecological function," the Telegraph reported.

"In our lifetime and on our watch, substantial areas of the Great Barrier Reef and the surrounding ecosystems are experiencing major long-term damage which may be irreversible unless action is taken now," the experts wrote in a May 5 statement.

"The planet has changed in a way that science informs us is unprecedented in human history."

The formerly impregnable doomsday vault was built in an abandoned coal mine to preserve seed packets for nearly 1 million of the world's plant species, protecting humanity's food supply if an apocalyptic disaster ever occurs.

Scientists told reporters in May that the seeds weren't damaged by the flooding, but the vault's integrity going forward may be threatened by the effects of increasing climate change.

"A lot of water went into the start of the tunnel and then it froze to ice, so it was like a glacier when you went in," Norwegian government official Hege Njaa Aschim told the Guardian.

"It was supposed to [operate] without the help of humans, but now we are watching the seed vault 24 hours a day," she added. "We must see what we can do to minimize all the risks and make sure the seed bank can take care of itself."

A new study in the journal of Nature Climate Change released Monday reveals climate change-related costs could be twice as much in the world's most populous cities, thanks to the heat island effect.

The EPA defines heat islands as "zones of relative warmth created by urban air and surface temperatures that are higher than those of nearby rural areas."

In major metropolitan areas like Tokyo and New York — where trees, grass and wetlands are routinely replaced with paved roads and buildings — the cooling effects of natural shade is reduced and water evaporation from soil and leaves is increased.

Combined with the heat island effect, climate change could raise temperatures by 14.4 Fahrenheit, forcing cities and companies to pay more for cooling-related energy costs, the study's authors concluded, according to Science Daily.

"We show that city-level adaptation strategies to limit local warming have important economic net benefits for almost all cities around the world," the authors wrote.