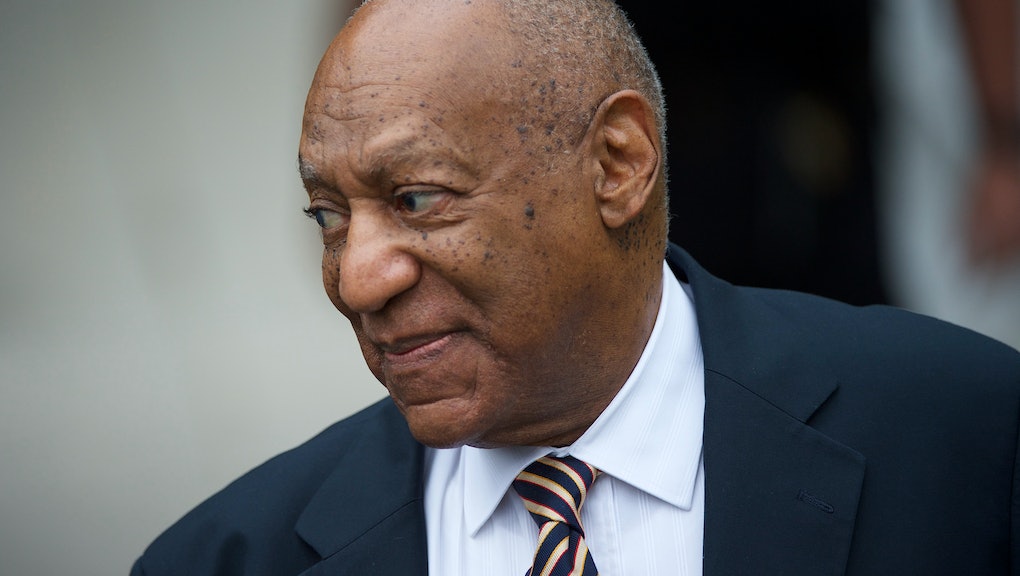 Yes, famous black men have spoken out against Bill Cosby — here's a list

Two things can be true at once: America can have an awful history of white people falsely accusing black men of rape.

That's an important reminder as we sit through the trial of the year as Cosby defends himself against allegations that he sexually assaulted Andrea Constand back in 2004.

Prior to the start of the trial, Cosby's family and legal team have set the trappings for his defense, saying that he is the victim of racism. In May, his daughter, Ensa Cosby, pleaded his case to listeners of the popular morning hip-hop radio program The Breakfast Club. "My father has been publicly lynched in the media," she said in a pre-recorded statement.

Another daughter, Erinn Cosby, was more tame but equally as supportive of her father. "Over the last few years, my family has been forced to sit by and watch as our father has been attacked in the media. And it has been difficult to remain silent to protect our loved ones from scorn as gossip fueled in the news as big entertainment. But what you hear in the media is a far cry from who our father is."

The chorus of Cosby's supporters all share similar sentiments; Cosby is innocent, he is just the latest target in the long line of men victimized by American racism or he is a legend whose legacy is being tarnished by money-hungry women. Some of the most prominent of Cosby's defenders have been black men. Eddie Griffin claimed the assault accusations were a "systemic effort to destroy every black male entertainers legacy." Damon Wayans called some of the accusers "un-rape-able." And several celebrities have shown support by accompanying him into the courtroom.

Given this outcry, there is an unspoken narrative that black men are more likely to defend one of their own against racism instead of standing up for women who've brought allegations of serial sexual assault.

But black men have criticized Cosby for his alleged assaults and they deserve to be heard, too. These black men who have spoken out take a complicated picture and simplify it: yes, racism is real, but racism's existence doesn't cancel out Cosby's culpability.

Here are a few of the most prominent black men who've spoken out against Cosby's alleged crimes.

If it weren't for comedian Hannibal Burress, Bill Cosby's alleged indiscretions may have still been the stuff of just Hollywood gossip. But it was Burress' comedy routine in Philadelphia back in October of 2014 that went viral and focused the spotlight squarely on the women who Cosby had allegedly sexually assaulted.

Burress pointed out the irony of Cosby consistently bashing young black people for wearing their pants low while at the same time allegedly raping women.

"... Bill Cosby has the fucking smuggest old black man public persona that I hate. 'Pull your pants up, black people'," Burress said then. "'I was on TV in the ’80s. I can talk down to you because I had a successful sitcom.' Yeah, but you raped women, Bill Cosby."

By mid-July of 2015, the sexual assault controversy surrounding Bill Cosby had reached a fevered pitch, but there weren't any criminal charges leveled against him (mostly because the statutes of limitations in many of the cases had run their course). In their place were questions about the morality of celebrating his legacy. That legacy included Cosby's 2002 Presidential Medal of Freedom, which was awarded to him by George W. Bush.

At the beginning of that month, the Associated Press uncovered a 2005 deposition in which Cosby had admitted on camera to giving women drugs to have sex with them. That admission shifted the public's outrage because here was Cosby, in his own words, describing actions that could wind up being criminal. In the face of mountains of heinous sexual assault allegations, wasn't it time, Cosby's critics screamed, to revoke it?

"There's no precedent for revoking a medal. We don't have that mechanism," Obama said in 2015, responding to the controversy. But instead of leaving it at that, and in an effort to sidestep directly commenting on Cosby's guilt or innocence, Obama offered up a definition of rape.

"If you give a woman — or a man, for that matter — without his or her knowledge a drug and then have sex with that person without consent, that's rape," the former president said.

At the time, dozens of women had already come forward and alleged that Cosby had done just that. The president's comments may have seemed neutral, but by underscoring the importance of consent, Obama showed that sexual assault awareness had reached the highest levels of government. And Cosby, who had built his later career off of giving condescending speeches to young black audiences, was now seriously having his own morality called into question.

Back in 2008, Ta-Nehisi Coates profiled Cosby for the Atlantic. The piece, called "This Is How We Lost to the White Man," explored the comic's strand of black conservatism. What it didn't do was offer an opinion on rumored, and sometimes documented, allegations of sexual assault against the comic. Shortly after Burress' Cosby clip went viral, Coates reckoned with his — and the media's — failure.

"Despite my opinions on Cosby suffusing the piece, there was no opinion offered on the rape accusations," Coates wrote. "At the time I wrote the piece, it was 13 peoples’ word [against Cosby's] — and I believed them. Put differently, I believed that Bill Cosby was a rapist."

Coates was one of the few public figures to actually grapple meaningfully and powerfully with their regrets when it came to Cosby.

"I don't have many writing regrets. But this is one of them. I regret not saying what I thought of the accusations, and then pursuing those thoughts. I regret it because the lack of pursuit puts me in league with people who either looked away, or did not look hard enough. I take it as a personal admonition to always go there, to never flinch, to never look away."

Cosby helped pave the way for black comedians like Dave Chappelle, who is one of the most prominent black comics of the hip-hop generation. So Chappelle's fans waited with baited breath for the comedian to tackle the rape allegations against Cosby in a highly-anticipated Netflix special, which debuted in March. Overall, the special left many of those fans disappointed — but he didn't pull any punches when it came to Cosby.

He didn't buy into the whole grand conspiracy theory — that Cosby was just the victim of a plot to have racist white women falsely accuse a black man of rape to ruin his career and influence.

"The ‘70s were a wild era and while all this was going on, Bill Cosby raped 54 people. Holy shit, that’s a lot of rapes, man. This guy’s putting up real numbers. He’s like the Steph Curry of rape. Man, that’s a lot of rapes! Fifty-four! If he had raped 30 less people, that’s still two dozen rapes! Don’t forget, each one of these rapes has eight hours of sleep in it. Ladies and gentlemen, that’s over 400 hours of rape. It only takes 65 hours to get a pilot’s license. If rapes were aircrafts, this nigga is Top Gun for sure."

In an interview with the New York Times to help publicize the Netflix special, Chappelle spoke a bit more at length about how he processed the Cosby allegations. "The Bill Cosby thing was tough for me. I’m not saying that to detract from his alleged victims at all. But he was a hero of mine."

Chappelle's words show that yes, people who once idolized Cosby — and whose careers were in many ways made possible by his — could have trouble coming to terms with the allegations and still believe the victims.

W. Kamau Bell laughs that he was inspired as a kid by the "artist formerly known as Bill Cosby," he's occasionally joked about on Twitter, hinting that Cosby, once an icon, can't be separated from the cloud surrounding him. "I"m not legally allowed to talk to a white person about how I feel about Bill Cosby," Bell joked in a nod to the complicated racial dimensions of the case.

Kenan Thompson has made several sketches about Cosby on Saturday Night Live, dating all the way back to 2005. But the sketches went from funny stabs at Cosby's moral grandstanding to critiques about Cosby's alleged rapes once the controversy surrounding him became hard to ignore. Thompson at one point said that Cosby is a "monster" if the allegations are proven to be true.

He also reportedly said that he thought Cosby was creepy when the two had worked together on Fat Albert. One piece of advice Cosby allegedly gave Thompson? That their Fat Albert would be so successful that "it'll be so hard to keep the women off you, you'll need two dicks." At another point, when Thompson brought his mother to the set, Cosby allegedly bounced her on his lap and said something about horse riding and kiddies.