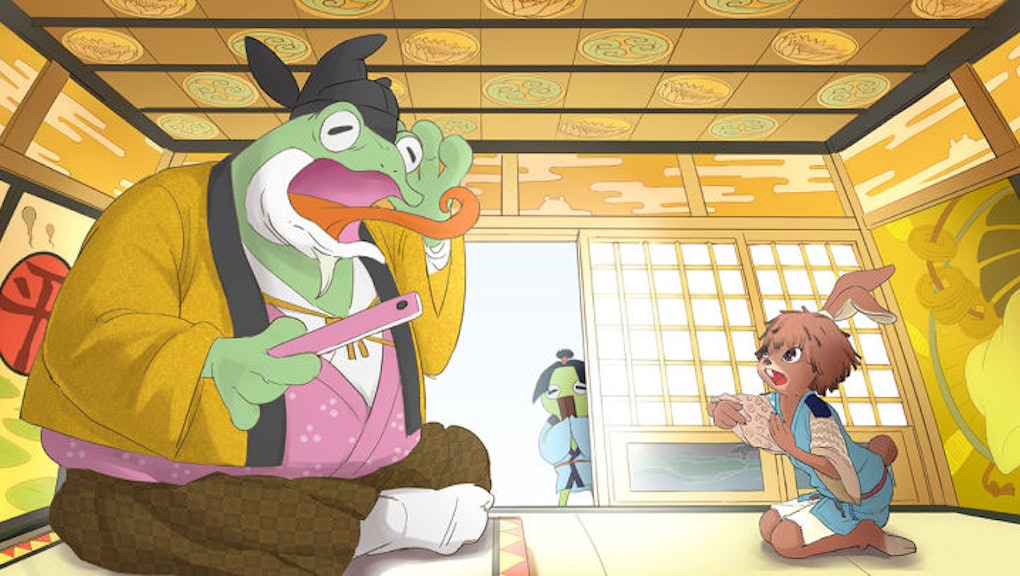 Project Rap Rabbit is a collaboration between two visionaries of the music video game scene: Masaya Matsuura of PaRappa the Rapper and Um Jammer Lammy fame, and Keiichi Yano, responsible for games like Elite Beat Agents and Lips. The project is currently seeking funding via Kickstarter, and if all goes well we could see one of the coolest music and rhythm games this side of Rez!

I was lucky enough to have a chat with Yano-san and Matsuura-san about Project Rap Rabbit and the plans both creators have for the game. If the project does come to fruition, it's going to be an exciting riff on typical music games in the future.

Mic: What cemented your decision to work together on a project rather than going it alone on two new ventures?

Yano-san: Matsuura-san and I have wanted to work together for many years now. In fact, we almost did at one point. We've both longed to return to story-led rhythm-action games, and have discussed how that could be done in a way that helped to evolve the genre and introduce new gameplay elements and ideas to music gaming.

Making a music game in today's climate, however, is tough – story-led music games are expensive to develop, and many publishers don't want to support genres that are less likely to dominate sales charts for weeks at a time. I wish that weren't the case, but to develop a triple-A rhythm-action title alone would be next to impossible. Together, we hope to build a game far greater than anything we could achieve as individuals.

Will there be elements of each other's individual titles in Project Rap Rabbit?

Yano-san: Project Rap Rabbit is an entirely new collaboration between NanaOn-Sha and iNiS J, so we've approached it not as an opportunity to just mix together different elements from our individual titles in the past, but to co-create something entirely fresh. Of course, there may be some features or ideas that people may want to point to and comment on the similarities with, say, PaRappa the Rapper or Gitaroo Man. That's only natural! Our main aim is to co-design something that's never been seen before in rhythm-action gaming.

Yano-san: Sadly, we don't own the licenses to be able to guarantee any cameo appearances for the stars of our older titles. That said, never say never!

Yano-san: The journey of Project Rap Rabbit is going to take some unexpected twists. Toto-Maru and Otama-Maru are our main stars, but there are going to be some surprises in the story involving our protagonists. As for what those surprises are ... you'll have to wait and see!

Which of the Epic Rap Battles of History that you've drawn inspiration from are your favorites?

Yano-san: There are the obvious choices, such as Steve Jobs vs Bill Gates, but I personally also loved Master Chief vs Leonidas!

Who are some of your favorite hip-hop artists?

Yano-san: You can't go without talking about artists like Run-D.M.C. and Eminem and Lil Wayne. Chance the Rapper is a recent favorite.

If the Kickstarter doesn't reach its complete funding goal, will you still plan on releasing Project Rap Rabbit, or do you have a backup plan?

Yano-san: We wouldn't have turned to Kickstarter if there were another avenue to secure funding and developer independence for Project Rap Rabbit. Though we're intent on making this game, we don't want to develop a watered-down version of Project Rap Rabbit or compromise on our vision for what this game should be. We strongly believe that rhythm-action fans deserve a high-quality, story-led title.

So right now we're not focused on what happens if we don't reach the goal. We've clearly got a long, long way still to go before we meet that target, but we're hopeful that fans will like what they see when we unveil our target gameplay footage. We want our gameplay reveal to prove to prospective backers that this isn't just another campaign that's trying to trade on past glories or that will fall short of initial promises, but a campaign to kickstart a game that will be embraced as one of the greatest music titles ever made.

How much can a single song change when you choose different responses based on your emotion wheel selections?

Yano-san: Quite dramatically. The word pickup phase and emotion wheel selections will change both your lyrics and the input timings, so songs will veer off in different directions depending on your choices.

It really is like a deep conversation in a role-playing game, where both characters respond and react to each other's words. Whereas linear songs are the same every time you play, Project Rap Rabbit's multiple branches mean that you'll be able to play the same song many times over and have a different experience each and every time. Think of it like "rhythm-action Out Run" – there are many roads that lead to the end, and each one has unique things to see. You want to journey down all of those roads, not just one.

Did the seamless rap composition idea come together from the freestyle rapping portions of PaRappa the Rapper?

Yano-san: Not so much the freestyle rapping elements as it was the suggestion by many that PaRappa the Rapper wasn't a rap game but a rhythm-game. Rap battles are amazing things to watch or participate in, and we wanted to properly capture that in video game format. The way to do that involved giving players control of the lyrics and shaping where the battle goes next – knitting together lyrics to damage their opponent almost like they would combo attacks in Street Fighter!

You cited Kung Fu Panda and Spirited Away as some of your influences. Did you ever watch Samurai Champloo or were you inspired by it as well? It weaves together hip-hop sensibilities and Japanese and Western styles quite effortlessly.

Yano-san: For sure that was an early inspiration, but at the same time we didn't want to be inspired too much there as we wanted to make sure we could bring our own style to the mix.

Would you ever be interested in creating a battle rap-styled game that could incorporate elements of karaoke à la Lips, where players could use microphones for spitting bars?

Yano-san: It's not in the current plans, but certainly the technology could probably now allow us to listen for the words to make sure you weren't just mumbling (unless the song was mumble rap!).

Does Project Rap Rabbit take place in the same universe as PaRappa and Lammy's games?

Yano-san: No. The world of Project Rap Rabbit is a new creation inspired by Japanese legends and folklore.

Do you ever see yourself revisiting Ouendan or even the Lips series for new consoles one day?

Yano-san: We would dearly love to revisit some of our past titles, but right now the environment isn't conducive to us doing so.

Vib-Ribbon and PaRappa the Rapper each got the chance to enter the spotlight in the West with re-releases and remasters. Is Lammy possibly getting a chance in the future?

Matsuura-san: I love Lammy as a character. Hopefully there might be a chance in the future, but not at the present.

Check out more video game content on Mic, including which Pokémon are actually the best and why black players can never seem to get custom characters that look like them. Learn more about how blind gamers are getting in on the fun. Don't miss our guide to dodging blue shells in the Mario Kart 8 Deluxe — you can thank us later.