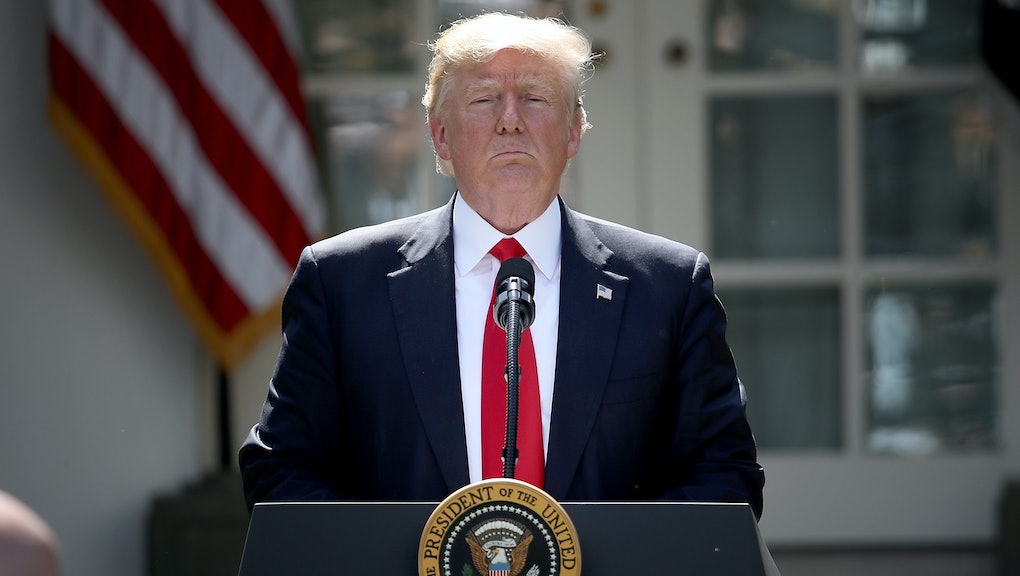 5 major implications of Trump pulling out of Paris accord

President Donald Trump announced on Thursday that the United States will begin the process of pulling out of the historic Paris climate agreement. Broadly, the goal of the accord, which was signed by 195 countries, is to "strengthen the global response to the threat of climate change" and keep global temperatures from rising.

So what happens now that the United States, the second biggest carbon-dioxide producer in the world, has decided to pull out of the agreement? Here are five major ramifications that go far beyond temperature swings.

The U.S. may have actually strengthened the Paris agreement by leaving

“There’s no question about the Paris agreement moving forward, it will just move forward without the U.S.,” Nathaniel Keohane, vice president for global climate at the Environmental Defense Fund, told Mic. But as others have noted, it is perhaps best for the world that the United States butts out.

“I argue that a U.S. withdrawal would minimize risks and maximize opportunities for the climate community. Simply put: The U.S. and the Trump administration can do more damage inside the agreement than outside it,” Luke Kemp, lecturer at the Australian National University, wrote in a post for the Conversation.

For his part, Keohane argued that Trump could have gained much more control of the agreement had he remained a part of it.

“If he’s such a great deal maker, why not say that he’s going to push for better rules on the agreement and if he doesn’t get them he’s going out pull out,” Keohane said. “Effectively, he just eliminated any leverage he might have had in the negotiations over the Paris rule book.” This "rule book" will ultimately establish the rules and processes needed to fulfill the global contract, though it has yet to be written.

The climate will continue to suffer

And while the accord will continue without the United States, it will not move forward at its full strength. As Quartz reported, 147 countries, accounting for more than 80% of global emissions, have already ratified the agreement. But now, with the United States out, it will be down to 146 countries representing just over 65% of all emissions. This will make it significantly harder for the world to meet its goal of keeping global temperature rise in check.

The U.S. will lose its global leadership position

As Keohane said, by exiting the agreement, the U.S. joins Syria and Nicaragua as the only nations on Earth not to take part in the accord. "I don’t think that’s a place the U.S. wants to be," Keohane said. "We are isolating ourselves diplomatically."

Other countries will also now be able to scoop up all the money the U.S. is leaving behind by not taking clean energy seriously. Estimates show that there is going to soon be a $1 trillion-a-year market for clean energy and clean energy efficiency, Keohane said. “That’s an enormous prize for the countries that are smart enough to seize the opportunity,” he said.

Leaving the agreement hurts potential job growth in the U.S.

In his speech announcing the U.S. withdrawal, Trump said that leaving the agreement will be better for the economy. Experts seem to disagree.

"Withdrawing from the Paris agreement is hardly going to create jobs in the U.S.," Cary Coglianese, professor at the University of Pennsylvania, told CBS. "While specific environmental regulations can sometimes lead to job losses, they also can and do lead to job gains — with the result being roughly a wash."

And doubling down on coal will do little for job growth. As CBS additionally reported, more than twice as many people were employed in the solar sector than in coal mining in 2016, according to the U.S. Department of Energy.

A February study on the economic impact of clean energy also found that every $1 million spent on fossil fuels supports 2.65 jobs. Spending the same amount on renewables creates 7.49 jobs on average. “Thus each $1 million shifted from brown to green energy will create a net increase of five jobs,” the study concluded.

The Republican Party could suffer in 2018

“This administration has done nothing but lie about the content of this agreement and I don’t think the American public is buying it,” Jamie Henn, co-founder of 350.org, told Mic. “I think this is a huge blunder for the Republican party to allow this to go forward and it’s going to cost them at the ballot box," he added. He may be right: A poll conducted by the Yale Program on Climate Communication showed that the majority of Americans in every single state supported the U.S. staying in the agreement.

It's not just Trump who needs to worry about losing support. On May 25, 22 Republican senators sent a letter to the White House urging Trump to withdraw from the agreement. As Mic reported, those senators likely had an ulterior motive. The Republicans who signed the letter have received almost $32 million combined in campaign contributions from the energy sector and $18 million from the oil and gas industry, according to records.