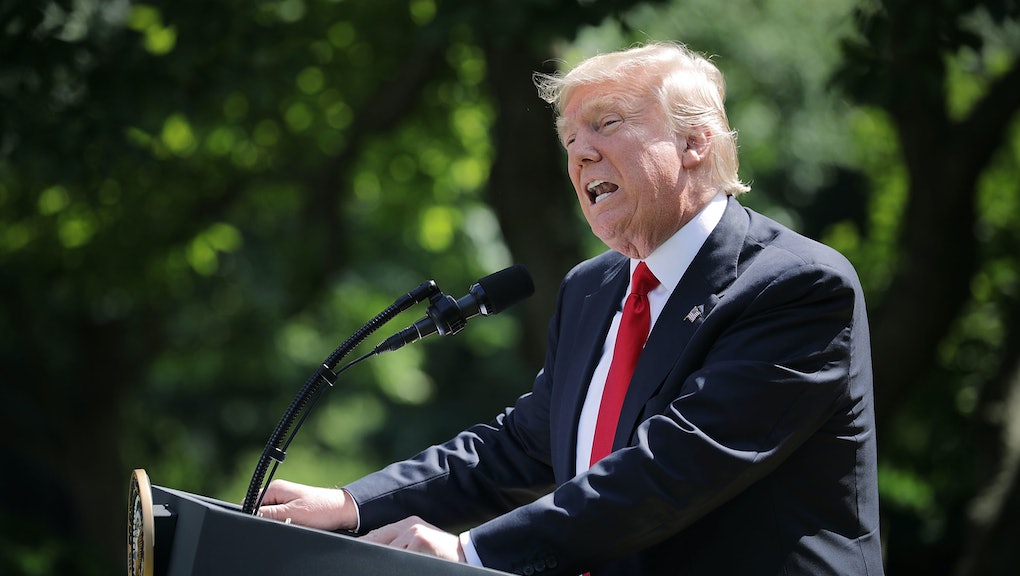 Paris Climate Agreement: How much will change with the U.S. gone?

President Donald Trump's announcement the United States will leave the Paris climate agreement ignited a firestorm of criticism at a level he’s but rarely seen. Democrats attacked his decision to withdraw as a threat to the planet. World leaders doubled down on their commitment to the agreement. The top American corporations, including major energy companies like Exxon Mobil and Chevron, supported staying in the agreement.

This all raises the question: If the broad consensus was against leaving the accord, why do it?

One point of view: It may have been more of a political victory for Trump than an economic victory for the country. "The aim is not so much to reason toward a policy conservatives would favor as to pierce the liberal claim to the moral high ground," wrote New York magazine's Jonathan Chait. (Notably, the 22 Republican senators who pushed Trump to leave the accord received $18 million from oil and gas companies.) Politico's Michael Grunwald characterized leaving the accord as "a middle finger to the world." "The financial and business elite coming together to castigate Trump does not hurt Trump politically," tweeted liberal MSNBC host Chris Hayes.

Trump claimed the U.S. stood to lose 6.5 million manufacturing jobs by staying in the accord. Yet American companies themselves said they stood to gain from the agreement — and they'll be just fine without it. The Wall Street Journal noted that many major energy players are already addressing climate change because of state and local regulations or economic incentives.

Fighting climate change will continue below the federal level. So far, 61 cities and three states have committed to upholding the Paris accord in their localities. (Trump's line that he represented the "voters of Pittsburgh, not Paris" drew a strong rebuke from the Pittsburgh mayor.)

The kicker? With companies and governments below Trump lining up to continue the spirit of the accord, the move may have little real effect, especially since the accord's targets for CO2 reduction were voluntary. Plus, it will take the better part of four years to pull the United States out of the agreement — setting up a presidential election showdown over climate change.

This is Mic's daily read on Donald Trump's America. Welcome to the political newsletter that can't believe it's already June. Donald Trump has been president for four months and twelve days.

Do you expect Republicans to pass health care or tax reform by August? Email me at trumpsamerica@mic.com.

Today: What you need to know after Donald Trump announced the United States will leave the Paris climate agreement.

More: Trump staffers aimed to ease sanctions on Russia from the start.

Even more: The White House wants the Supreme Court to rule on Trump's travel ban.

Yes, more: The president said the attack in Manila was terrorism. It wasn't.

Yahoo reported that "top Trump administration officials ... tasked State Department staffers with developing proposals for the lifting of economic sanctions, the return of diplomatic compounds and other steps to relieve tensions with Moscow.”

The House Intelligence Committee has again broken down along partisan lines. Democrats have stalled witness interviews over complaints they have turned over too few documents to the committee.

The White House has asked the Supreme Court to evaluate the president's 90-day travel ban that would stop entry for travelers from six Muslim-majority nations. Trump is hoping the court will grant a stay and let the ban go into effect while it hears the administration's appeal to lower court decisions.

Trump called the attack at a casino in Manila, Philippines, a "terrorist attack" before his own intelligence staff signed off on the accuracy of the remark— raising questions about why he concluded terrorism was involved.