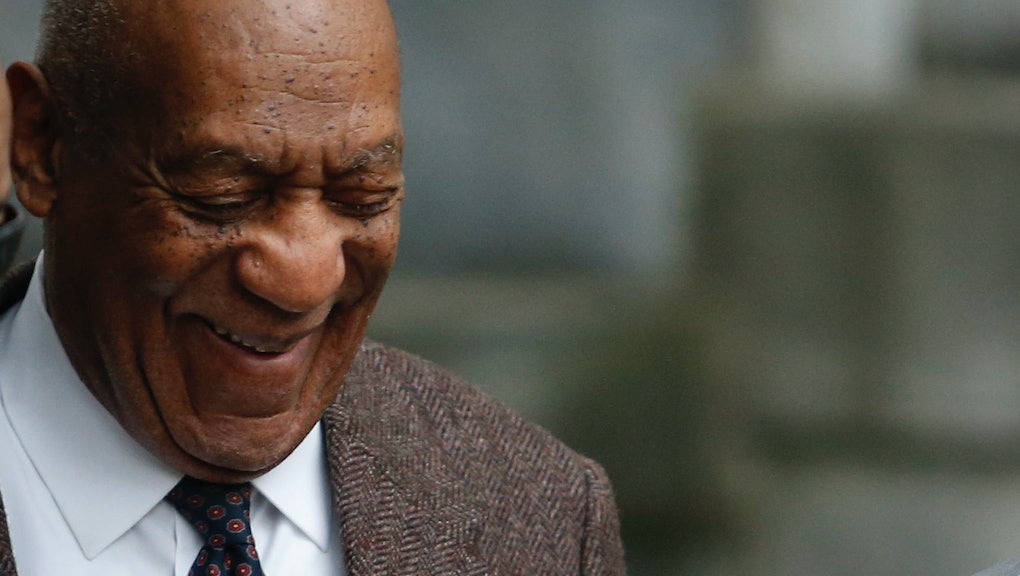 Bill Cosby's rape trial: Everything you need to know

Bill Cosby will finally have his day in court.

The disgraced 79-year-old comedian will be tried on three counts of aggravated indecent assault for allegedly sexually assaulting Andrea Constand, a former employee of Temple University's women's basketball program. The assault allegedly took place in 2004 at Cosby's home outside of Philadelphia. Each count carries a maximum sentence of 20 years in prison, according to the Washington Post.

The trial is one of the most highly anticipated criminal proceedings in recent decades. In order to understand everything surrounding this moment, here's what you need to know.

Cosby's trial is set to begin on June 5 in a Montgomery County, Pennsylvania, courtroom.

Montgomery County, is just north of Philadelphia. It's important to note that the jury that will decide Cosby's fate is actually from Pittsburgh, thanks to a move by Cosby's legal team, which argued that a Montgomery County jury would be biased by all of the local publicity surrounding the trial.

The jury is made up of 12 people: four white women, six white men, one black woman and one black man.

Jury selection in the case was a hard-fought battle. At one point during the selection process, Cosby's defense team argued that prosecutors were "systematically excluding" black jurors. Cosby's defense team believes that black jurors could be more sympathetic to Cosby in light of him being one of the world's most recognizable and beloved black celebrities for decades.

In recent years, 60 women have come forward and publicly accused Cosby of sexual assault, according to a tally kept by the Washington Post. But most of those assaults are alleged to have happened decades ago, and the women were unable to pursue criminal charges because the statutes of limitations in their cases had run out.

Constand's allegations are the one known exception.

Constand alleges that in January 2004, she went to Cosby's home for what she thought would be a friendly chat about her career. At the time, she was the director of operations for Temple's women's basketball team. Cosby had attended the school in the late 1960s and had gone on to become a donor and the trustee of its board of directors (a position from which he resigned once the sexual assault allegations hit a fever pitch in late 2014). Constand considered Cosby a mentor and had spoken to him previously about breaking into broadcasting.

In a deposition that was later filed for court proceedings, Constand described a few instances in which Cosby had made sexual advances toward her on different occasions. But in January 2004, Constand described going to Cosby's home and him offering her three pills to "take the edge off" and a glass of wine. Constand became dizzy and nauseous. "I was aware that his hands were in my pants and that his fingers were in my vagina." She says that Cosby's erect penis was exposed, and that he put her hand on it. "He entered my pants from behind," she said. "I was unable to move my body. I was pretty much frozen."

Constand says she drifted in and out of consciousness. She eventually woke up in Cosby's bed alone at 4 a.m. the next morning with her bra undone and up around her neck. She got up and made her way to the door, where she says she found Cosby standing at the bottom of the staircase. He was wearing a burgundy V-neck robe with open-toe blue slippers, and motioned to a mixed fruit muffin on a nearby table.

"I put my jacket on and he communicated to me with his body language that it was time to go," Constand told police in 2005. He simply opened the door and said, "Alright."

Soon afterward, she resigned from her job at Temple and moved home to live with her parents in Toronto.

"I was emotionally shocked," Constand said later. "I was still traumatized about the whole situation. I had some emotional stress I was dealing with. I needed to come to terms with this on my own.”

Her mother, Ginna Constand, soon noticed changes in her daughter, according to a probable cause affidavit that was filed years later. She isolated herself, had nightmares and would scream in her sleep. Eventually, on Jan. 11, 2005, nearly a year after the alleged attack, the younger Constand told her mother that she had been raped by Cosby. Ginna Constand then picked up the phone and called to confront Cosby directly. When he didn't answer, she left a message. And on Jan. 16, he called back.

They spoke for two and a half hours. Ginna Constand asked Cosby what he had done to her daughter. He'd "have to look at the prescription bottle," he told her, claiming that he had an eye condition that made it hard for him to read. He admitted he'd had sexual contact with Andrea Constand, apologized and offered to cover any expenses associated with therapy, according to the affidavit.

Cosby called back the next day, and this time Ginna Constand had a tape recorder ready. Again, Cosby offered to send money, asking if Andrea was still interested in pursuing a broadcasting career. The next day, one of Cosby's representatives reached out and offered to set up a meeting, but Ginna Constand declined. She went to the police instead.

But the Montgomery County district attorney at the time, Bruce Castor, declined to charge Cosby because he didn't think there was enough evidence. So Constand filed a civil suit instead.

During the civil suit, Cosby sat for at least two depositions that would come to haunt him years later. He described his sexual contact with Constand as consensual.

"I walk her out," he said in one of the depositions that was uncovered by the New York Times in 2015. "She does not look angry. She does not say to me, 'Don't ever do that again.' She doesn't walk out with an attitude or a huff, because I think that I'm a pretty decent reader of people and their emotions in these romantic sexual things, whatever you want to call them."

(Constand's lawyers later said publicly that she identifies as a lesbian and that she had no sexual interest in men, especially Cosby. This seemed to counter the idea that he was "a pretty decent reader of people and their emotions in these romantic sexual things.)

The case was settled settled out of court in 2006 for an undisclosed sum. As part of the settlement, Constand could not go public with her claims. Castor also promised that no criminal charges could be filed against Cosby as a result of the Constand case.

Fast forward to eight years later. It's October 2014 and Cosby is known in public mostly as an iconic comedian and occasionally cantankerous old man who chastises black kids "with their hat on backwards, their pants down around their crack." The media hasn't paid much attention to the rape allegations against Cosby that occasionally surface every now and then around Hollywood, save for journalist Mark Ebner. In 2007 he interviewed a former Hollywood publicist named Joan Tarshis, who claimed Cosby had raped her. Ebner dug around and found more women with similar claims, and eventually published his story on an insider-y website called Hollywood, Interrupted.

"In my interviews with several of the women back then, I found the tale they told disturbingly similar: all were young and impressionable, beautiful and talented," Ebner later wrote. "Cosby had taken a keen interest in their careers, and had offered to mentor them or otherwise open the fabled doors to the glistening kingdom of show business, for which he was a principal emissary. All were given spiked drinks — or drugs misrepresented as medicine — and became incapacitated, the women charged. And all allegedly awoke with the unshakable sense that something wrong had occurred."

People magazine ran a story on the mysterious settlements that Cosby had reached with several women who'd accused him of rape. But overall, the case itself didn't get much traction.

But a lot happened after 2007 as far as how America viewed sexual assault. Most notably, conservations about sexual assault, and the institutions that help sweep it under the rug, reached the highest levels of the U.S. government. Former Vice President Joe Biden eventually launched his own initiative to empower bystanders to intervene in sexual assaults before or as they're happening.

Similarly, Cosby's moral grandstanding seemed particularly out of step with the times.  Black Lives Matter had become a rallying cry against police brutality, and its organizers were clear that all black lives — even the ones who wore their hats backwards and their pants down around their cracks — deserved dignity.

That was the backdrop on Oct. 16, 2014, when Hannibal Buress, a then 31-year-old black comedian from Chicago, took the stage at Philadelphia's Trocadero Theatre. He started talking about Cosby, the city's hometown hero who had begun his career there in the 1960s.

"... Bill Cosby has the fucking smuggest old black man public persona that I hate: 'Pull your pants up, black people,'" Buress said then. "'I was on TV in the '80s. I can talk down to you because I had a successful sitcom.' Yeah, but you raped women, Bill Cosby."

Video of the routine went viral. The media was interested — finally.

For Ebner, the journalist who'd reported on the rape allegations against Cosby in 2007, this sudden interest is crucial to note. "It's important to track the history of this story, and the media complicity that enabled it to remain untold for so long," Ebner wrote in 2015 for the Daily Beast in a piece titled "I Warned You About Bill Cosby in 2007." "Heroes always fall hard, but their suffering and anguish is nothing compared to that of their victims."

They were women of all different backgrounds and ages. Some were supermodels and Playboy bunnies. Others were casino workers, nurses and flight attendants. They all had similar stories: Cosby had befriended them with the promise of mentorship, drugged them and raped them. Sometimes twice. There was so many that they even started to form their own geographically specific support groups, according to a New York magazine profile that brought many of them together for the first time. And they all said Crosby was shielded, one way or another, by his power.

Barbara Bowman, one of the alleged victims, went public with her story in 2006 — and was even willing to testify then, along with 12 other women, that Cosby had also raped them. In 2014, she wrote her story in the Washington Post.

"Only after a man, Hannibal Buress, called Bill Cosby a rapist in a comedy act last month did the public outcry begin in earnest," she noted. "The entertainment world is rife with famous men who use their power to victimize and then silence young women who look up to them. Even when their victims speak out, the industry and the public turn blind eyes; these men's celebrity, careers and public adulation continue to thrive."

Cosby rarely addressed the firestorm of accusations. But the Associated Press, and then the New York Times, published portions of the depositions from Constand's civil case. Cosby admitted to giving quaaludes, a sedative that was once a popular party drug, to women to have sex.

But even as they all came forward, they ran into the same problem: their alleged assaults had happened years, sometimes decades, ago and the statues of limitations had run out in almost all of their cases.

Except for in Constand's. By 2016, she was just nearing the 12-year statute of limitations that Pennsylvania has for sexual assault cases. In May 2016, a Pennsylvania judge found that there was enough evidence to bring criminal charges against Cosby.