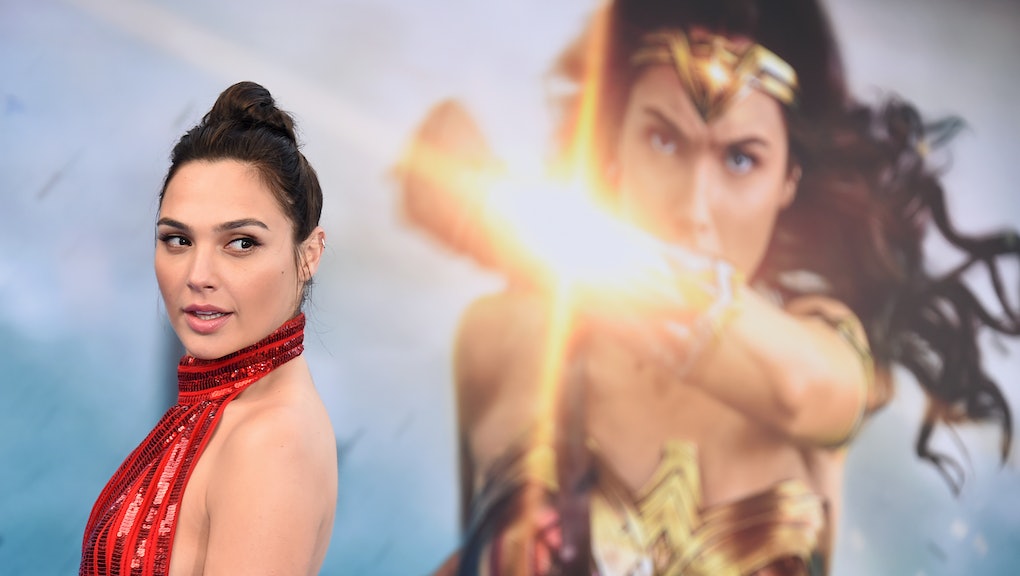 If there were ever someone capable of saving the world in nothing but a corset and underpants, it'd be Wonder Woman — but should the world's foremost feminist superhero still have to?

There have been dozens of variations over the years, but despite the changing times and fashion, nearly every Wonder Woman costume has consisted of a form-fitting red bodice and tiny, star-spangled shorts or bikini-like bottoms.

"That has always been problematic," Valerie Estelle Frankel, author of Empowered: The Symbolism, Feminism and Superheroism of Wonder Woman, told Mic on Monday. "Wonder Woman is quite arguably the strongest super-heroine in existence and the oldest, longest-lasting one, but she's going around in a corset bathing-suit costume."

In October, Wonder Woman's iconic ensemble — coupled with her thin body and large breasts — made nearly 45,000 people sign a petition asking the United Nations to remove the fictional character as its honorary ambassador for women and girls.

"The character’s current iteration is that of a large-breasted white woman of impossible proportions, scantily clad in a shimmery, thigh-baring bodysuit with an American flag motif and knee-high boots — the epitome of a 'pin-up' girl," the petition read. It went on to call Wonder Woman an "overtly sexualized image" unfit to be a role model for girls.

According to Frankel, the petition's critiques weren't without merit: Despite Wonder Woman's arguably feminist origins — her creator was inspired by the early feminist movements for suffrage and birth control — the author said it's often obvious the character was crafted for men's titillation.

"Some eras of the comic books were having fun with — 'How high can we raise the sides of Wonder Woman's thong?'" she pointed out.

Frankel said the overt sexualization of the character saw a resurgence in the '90s with artist Mike Deadato, who she said learned he could increase sales by raising Wonder Woman's hemline. "I am Brazilian," Deadato told Complex earlier in June. "Sexy here is normal."

Patty Jenkins' Wonder Woman movie doesn't shy away from the character's iconic, if frustratingly sexualized, costume. Instead, the film lets Wonder Woman, who goes by the name Diana Prince, playfully wink at the ongoing disputes over her outfit. What's more, Jenkins endowed her protagonist with enough agency to make clear that what she ultimately wears is her choice — and despite whatever pleasure male viewers get out of it, her sartorial choices are utilitarian more than anything.

One of the most entertaining scenes in the movie involves Diana, having just arrived in London, attempting to find an outfit to help her blend in.

Diana tries on a series of modest dresses and petticoats your average World War I-era, non-Amazonian woman might be seen wearing, and decides none of them are suitable for her purposes. Trying out her signature kicks and jumps, Diana even rips the seam of one dress.

"How can a woman possibly fight in this?" she wonders.

She eventually decides on an all-black menswear look that cinches at the waist and generally clings more closely to her toned body. And thank God — if Diana had settled on any of the other 20th-century looks, she might have had a harder time saving obligatory love interest Steve Trevor's life in the following scene.

Later, when Steve, Diana and their allies contemplate how they're going to sneak into the villain's castle during a gala, Wonder Woman's outfit — an armored version of the super-heroine's signature look, sans stars — again becomes a problem.

Steve insists that if Diana enters the castle as-is, she'll be a "distraction," parroting the casual sexist slights girls and women hear every day.

Diana largely rejects Steve's advice, fashioning herself a floor-length dress that somewhat adheres to the event's dress code but still allows her to disrobe and reveal her fighting armor at a moment's notice.

Frankel agreed Jenkins' portrayal of Wonder Woman is an improvement on many of the character's past iterations. She pointed out there are no slow camera pans over Gadot's body, one of many ways the camera can replicate the male gaze, according to famous feminist film critic Laura Mulvey. Plus, the only time a nude body is on display is when Diana walks in on Steve bathing — a nod, Frankel said, to power of the female gaze.

Despite these strengths, Wonder Woman is far from a flawless feminist film. Diana's wide-eyed naïveté, jokes about men being "aroused" by Diana's strength and the compulsory romantic arc are all jarring to audiences expecting, perhaps, something a bit less "cheesy."

But Frankel said Wonder Woman is nothing if not a reflection of the feminism of her time — and so the seemingly imperfect film does make a certain amount of sense. In her early years, she'd been suffragette Wonder Woman, breaking the literal chains of patriarchy. There'd been the second-wave feminist Wonder Woman, who appeared on a 1972 cover of Ms. Magazine alongside articles about Simone de Beauvoir and body hair. And more recently, there was her third-wave equivalent that further challenged gender norms and recognized the way sexism governed the world.

So in 2017, it holds that Wonder Woman would reflect our modern-day feminist rhetoric that tells girls and women their bodies aren't "distracting" or inherently sexual, despite whatever sexist high-school dress codes have to say about them.

"She's completely reflecting her eras," Frankel said. "Right now we want not just someone who's strong and has superpowers, but [someone] who is as awesome as any male superhero onscreen."

Jenkins' Wonder Woman may not be a perfect feminist — who is? — but maybe she's the feminist we need right now.