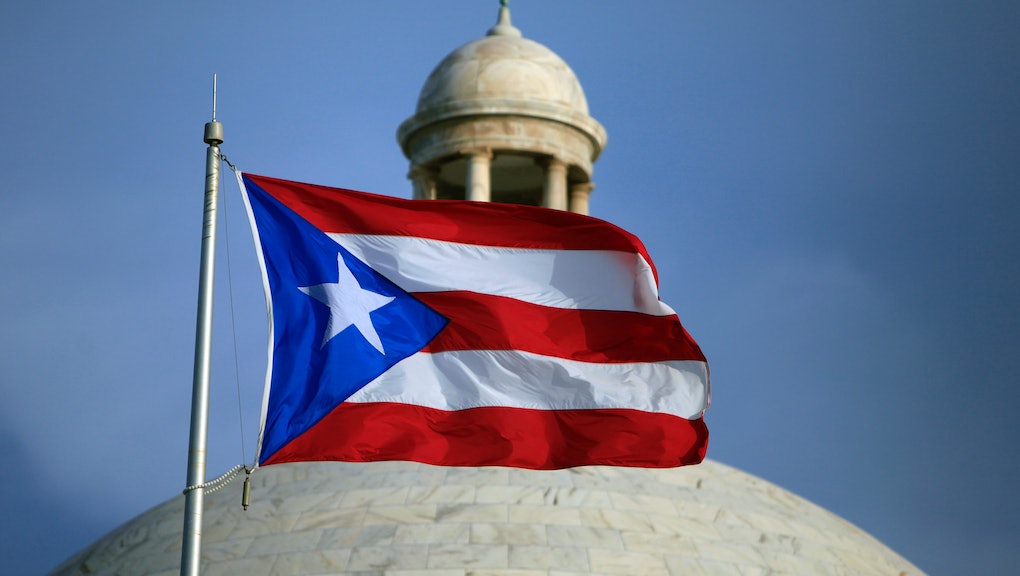 Puerto Rico statehood vote: What to know ahead of Sunday's vote

On Sunday, Puerto Ricans will head to the polls to vote in a non-binding referendum on whether or not to become the 51st U.S. state.

While the local government hopes joining the union will fix the island’s economic woes, many fear the change in status will mean losing their language along with their unique heritage — that, and becoming a state isn’t as easy as you’d think.

As of now, Puerto Rico's people do not have the full rights of U.S. citizenship, and the territory itself does not have the same powers as a state. Thus, it has been left behind in much of the decision-making that affects the island. Puerto Rican residents cannot vote for president, and although the island is subject to federal laws, residents are exempt from some federal taxes, CNN reported. The territory is even left off the U.S. Olympic team and competes as its own nation.

Even if every single Puerto Rican living on the island votes for the commonwealth to become a state on Sunday, the prospect of joining the union is not guaranteed. The question would then be put before U.S. Congress, which would have to pass a law enacting its statehood.

Sunday will mark the fourth time Puerto Rico has voted on statehood, according to the Miami Herald. In 2012, for the first time ever, a majority of Puerto Ricans voted for statehood, but that vote has been marred in controversy.

As PR51st explained, the ballot question asked: "Do you agree that Puerto Rico should continue to have its present form of territorial status?" To this question, 54% of voters said "no." The second question asked: "Irrespective of your answer to the first question, indicate which of the following non-territorial options you prefer," with the options being statehood, independence or sovereign free associated state." Sixty-one percent of Puerto Ricans voted for statehood.

But that 61% didn’t denote a true majority, as nearly 500,000 voters left the second question blank, meaning just 45% of those voting supported statehood. The blank ballots left many, including the U.S. Justice Department, to consider the vote invalid.

Now, Puerto Rico has to vote all over again to prove it meant it.

Who wants Puerto Rico to become a state?

The movement for statehood has gained momentum in recent months thanks to the election and swearing in of Puerto Rico's new governor, Ricardo Rosselló.

Rosselló made it clear during his 2016 campaign that statehood would be his first action in office, as he sees it as Puerto Rico’s only way out of its $70 billion public debt.

"We feel statehood or the lack thereof is one of the critical root problems in Puerto Rico," he told the Associated Press.

President Donald Trump may be a supporter of statehood as well. While still a candidate for president, Trump remarked, "The will of the Puerto Rican people in any status referendum should be considered as Congress follows through on any desired change in status for Puerto Rico, including statehood.”

Who wants to remain a territory, or go for full independence?

Not everyone is as excited as Rosselló about the chance to become a state. Archbishop Roberto González Nieves, an influential figure in Puerto Rico, told the Miami Herald that citizens don't even really know what they are voting for.

"The United States hasn’t said what the conditions are to allow Puerto Rico statehood," Nieves said. "And until we know those conditions this debate is premature.”

Instead, he said, Congress should modify legislation that hurts the local economy. That includes the Jones Act of 1920, which prohibits non-American ships from carrying goods between the island and the mainland. By undoing it, he said Puerto Rico could invite more global competition and lower prices on consumer goods, which would greatly help the island as its cost of living skyrockets.

Is the statehood referendum likely to pass?

If history is any indication, Puerto Ricans will likely vote in favor of becoming America’s 51st state. But the island's deep financial burden may end up killing the statehood prospect.

In order for Puerto Rico to officially enter the union, Congress needs to pass a law admitting it in, according to the Economist.

As the Huffington Post explained, a 2014 report by the Government Accountability Office found that if Puerto Rico were to become a state, it would cost an estimated $5.2 billion in new federal spending, but the U.S. government would only receive $2 billion to $4 billion back in new revenues.

What's more, Puerto Rican statehood would afford the island a likely five-member representation in the House as well as two senators — or as NPR reported, it would have a delegation about the size of Connecticut or Oregon. And the current Republican-controlled House and Senate is unlikely to vote in a few new rivals if it feels Puerto Rico will sway Democratic.