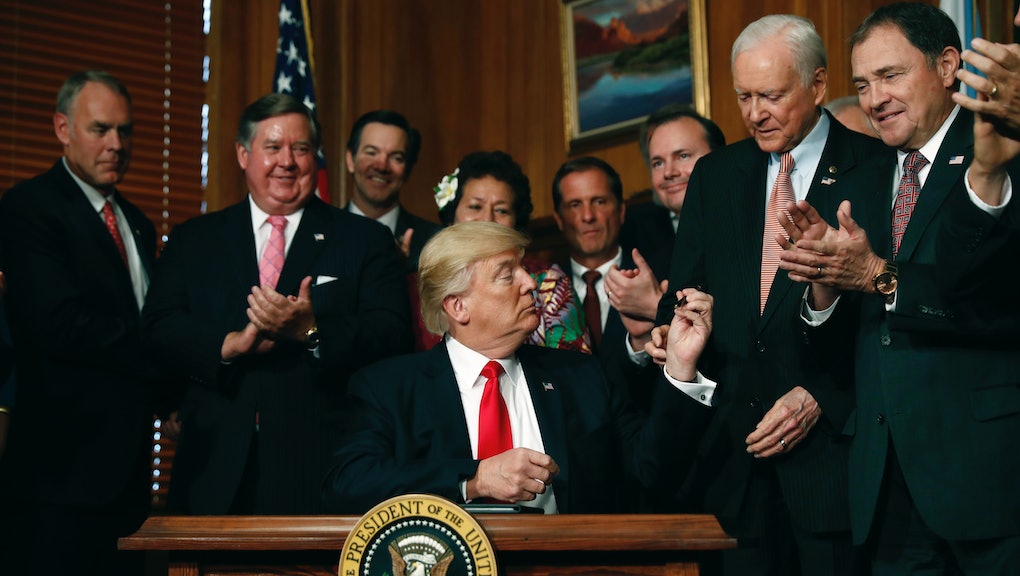 Interior Secretary Ryan Zinke has officially recommended to President Donald Trump that Bears Ears national monument in Utah should be reduced in size.

In his recommendation, Zinke notes that parts of the expansive 1.3 million acre area could be used for mining, fishing, grazing, logging and hunting, the Guardian reported.

The recommendation comes as part of an executive order Trump signed in April calling for a review of all national monument designations signed since 1996. As Mic reported, the order applies to monuments created under the Clinton, Bush and Obama administrations. However, Trump seemed to only single out Obama in his announcement of the order. Trump called the Bears Ears designation an "egregious abuse of federal power" and a "massive federal land grab."

"The previous administration used a 100-year-old law known as the Antiquities Act to unilaterally put millions of acres of land and water under strict federal control," Trump said of Obama’s decision to protect the Utah land. "The antiquities act does not give the federal government unlimited power to lock up millions of acres of land and water and it's time we ended this abusive practice."

In his findings, which he presented to Trump on Saturday, Zinke says that many areas of the monument merit protection, such as areas of importance to tribes for traditional cultural practices, but that those areas should be separated out and the monument should be reduced to the "smallest area compatible with proper care and management of the objects to be protected."

According to the Washington Post, both Native American and environmental groups have already threatened to sue should Trump follow Zinke’s recommendations. Of working with Zinke, Davis Filfred, a representative of Navajo Nation, told the Washington post, “I haven’t been happy with him since day one. I don’t know what that word happy is.”

According to the Washington Post, Zinke couched his recommendation a bit by also suggesting that the president wait for the final review of all monuments to be completed before he moves forward with reducing the size of Bears Ears.

On Monday, Zinke told reporters he didn’t hastily come to his recommendation, but rather came it after traveling the land “by air, by car, by foot and by horseback.” He did not provide a specific acreage recommendation as that would be up to Congress, the Washington Post reported.

As the Guardian noted, since the Antiquities Act was created in 1906, giving the president power to declare areas of land or ocean to be protected, no president in history has ever used it to scale back national monuments.