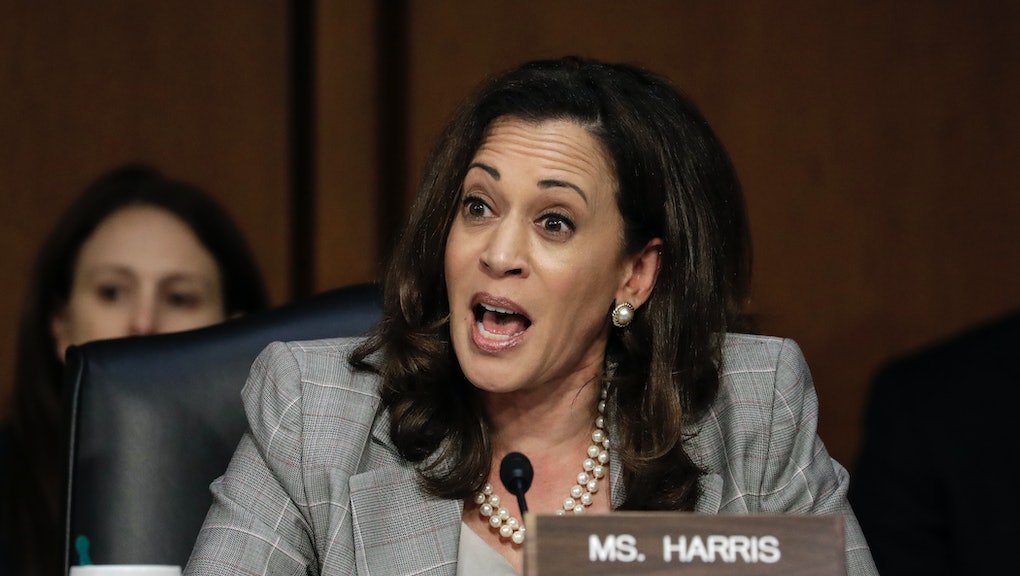 Sen. Kamala Harris cut off for the second time by male colleagues during intelligence hearing

During Attorney General Jeff Sessions' testimony before the Senate Intelligence Committee on Tuesday, Sen. Kamala Harris (D-Calif.) once again found herself the victim of manterruption.

The incident involving Harris and committee chairman Sen. Richard Burr (R-N.C.) was so striking, it left many wondering why Harris has been singled out as someone who apparently needs to be reprimanded for her questioning style.

Harris was first chastised by Sen. John McCain (R-Ariz.) during Deputy Attorney General Rod Rosenstein's testimony over Russia's alleged involvement in the 2016 presidential campaign. In that incident, McCain interrupted Harris as she pressed Rosenstein to respond to a question about special counsel Robert Mueller and his degree of independence from the Justice Department. McCain essentially asked Burr to cut off Harris so that Rosenstein could be "allowed to answer."

Moments later, Burr stepped in and instructed Harris — who had continued her questioning despite McCain's disruption — to "extend courtesy" to Rosenstein and other witnesses.

Is Harris — the only woman of color on the committee — really being singled out for her behavior, or are we simply imagining things? According to transcripts and multiple media reports, it appears the former is true. Consider Tuesday's episode, when Harris asked Session to explain why he could not answer certain questions. "I'm not to be able to be rushed this fast. It makes me nervous," Sessions replied, according to a transcript from Politico.

But Harris — the first African-American and first woman to serve as California's attorney general — continued on, or at least attempted to, before McCain interrupted her once again. "Chairman, the witness should be allowed to answer the question," McCain said. Burr agreed, adding, "Senators will allow the chairs to control the hearing. Senator Harris, let him answer."

As both NBC and Huffington Post reported, Harris was the only senator interrupted and reprimanded during the hearing, despite other committee members engaging with Sessions in a similar manner.

Following the questioning, Harris tweeted, "It's unacceptable that Sessions — the top law enforcement official in the country — cannot name his legal basis for evading questions."

So far, Harris has not made a public statement about these events. Following the initial manterruptions during Rosenstein's testimony, spokesman Tyrone Gayle told reporters Harris was doing her job.

"As a career prosecutor and former attorney general, Senator Harris has run countless investigations and will follow the facts wherever they may lead to get the truth for the American people," Gayle said. "That can only happen when witnesses answer questions."

And while both incidents make for great political fodder, what happened to Harris is a serious issue that happens to women across the country and in every industry.

According to a 2014 research report published in the Journal of Language and Social Psychology's online edition, everyone likes to interrupt women — including other women.

"Results suggest no significant changes in language based on speaker gender," researchers Adrienne B. Hancock and Benjamin A. Rubin wrote. "However, when speaking with a female, participants interrupted more and used more dependent clauses than when speaking with a male."

In fact, study results found male participants logged an average of 2.1 interruptions over the course of a three-minute conversation with a woman. Women, meanwhile, interrupted other women an average of 2.9 times — and just once if their partner was male, the New York Times noted.

Additionally, a 2012 study by Brigham Young University and Princeton University determined women speak "less than 75% of the time that men spoke" during group collaboration, such as work meetings or school projects.

"Women have something unique and important to add to the group, and that's being lost, at least under some circumstances," lead study author and BYU political scientist Chris Karpowitz said in a statement.

Even extremely high-powered women can succumb to interruptions. In a 2017 empirical study by Northwestern University Pritzker School of Law professor Tonya Jacobi and law student Dylan Schweers, male Supreme Court justices were found to interrupt female justices during oral arguments approximately three times as often as they interrupt each other. Moreover, female justices aren't just interrupted by peers — they're also interrupted by their male subordinates.