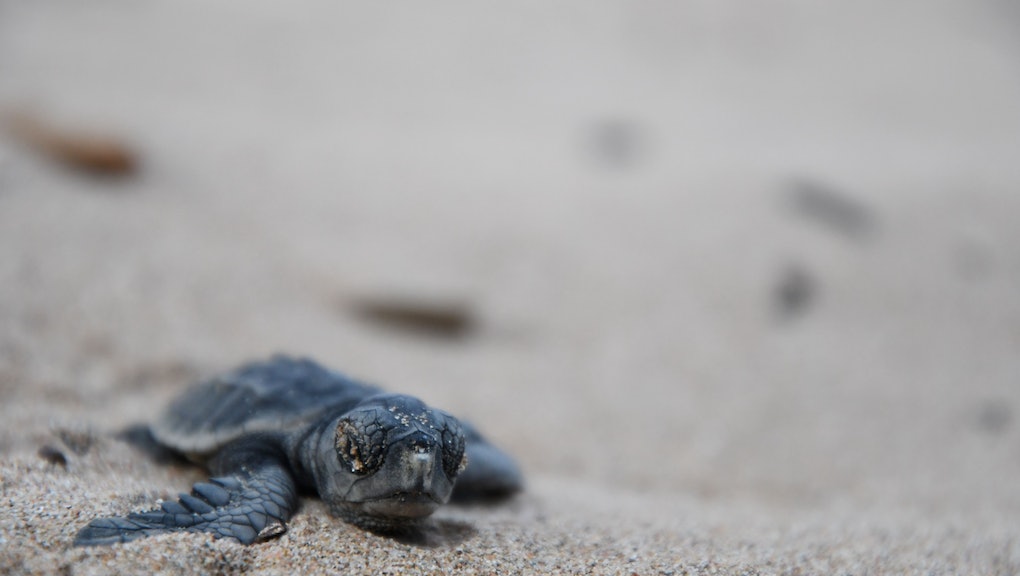 The dangerous effects of climate change are no longer a far-off possibility. Just ask the baby sea turtles.

From the very second sea turtles are born they are in a fight for survival. After they dig their way to sand’s surface they must beware of every predator and every obstacle in their path to the cool ocean waters. In fact, only an estimated one in 1,000 sea turtles survive into adulthood. And now it appears humans have caused one more obstacle for these tiny creatures, even before they hatch.

Climate change, according to Oceana, is causing a significant increase in temperatures on beaches across the globe, including those along the Florida coast. The scorching sand has become so hot that it can literally cook a turtle embryo buried beneath the surface as it develops.

"In some places the nests are getting so hot that there’s no survival," marine biologist Kristin Mazzarella of Mote Marine Lab in Sarasota, Florida, told Oceana. "The eggs don't hatch."

Jeanette Wyneken, a sea turtle biologist at Florida Atlantic University, further explained that the loggerhead, green and leatherback turtle populations used to thrive in the area. As she noted to Oceana, on average, somewhere between 78% to 81% of the eggs laid in the area eventually hatched, but in 2015 that number sharply dropped to just 58%. In 2016 it plummeted even further, with only 38% of the eggs hatching.

"We’re seeing more dead eggs," Wyneken said. "And when we do get turtles hatching they’re often heat stressed: They may hatch and crawl to the water, but then die."

But the climate-related issues don’t stop there. As Quartz reported, the rising temperatures also have the unique ability to determine the sex of sea turtles and other reptiles. The warmer the temperatures the more females the nest will produce.

"Sea turtle sex is determined by incubation temperature and individuals lack external sex-based traits until sexual maturity," a 2015 study published in PLOS ONE said. The study found that females have begun to outnumber males by nearly four to one, Quartz noted.

In fact, without behavioral or phenomenological shifts, "climate change scenarios indicate that the problem of near complete feminization for certain rookeries of different sea turtle species could occur within the next ten to fifteen years or years," the study concluded.

To help combat the rising temperatures scientists have resorted to shading and even watering the sands around nests. In a 2015 study that followed the effects of climate mitigation on turtles in Playa Grande, Costa Rica, scientists found that “shading had the largest impact on sand temperature, followed by watering and depth." For now, Oceana said, manual cooling of sands is just a "band aid" rather than solution to the earth’s rapidly increasing climate issues.