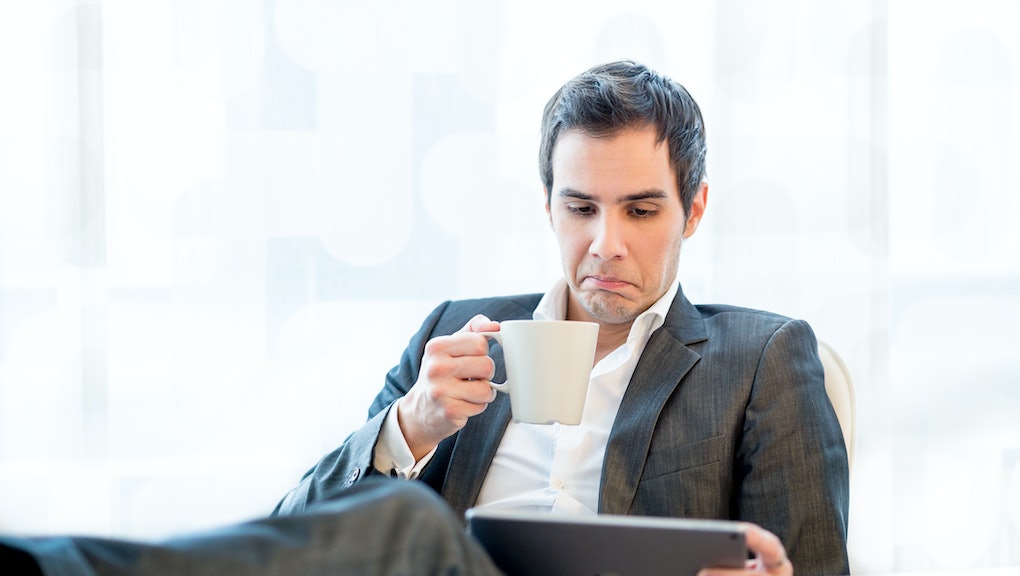 Career mistakes to avoid: Never use these 10 red flag phrases on a resume or cover letter

Describing yourself in a cover letter or resume as a "well-seasoned team player" who is an "exceptional communicator" and is "results driven" could get your application dumped into the "circular" file (aka the trash) faster than a "productive worker" can move. While these phrases sound solid, they actually work against you and make it less likely you'll get past the resume screener of a potential employer.

What makes these terms such a turnoff, exactly? For one: "Using certain outdated terms like 'objective' on your resume dates you and makes it look as though you aren't current or relevant," Vicki Salemi, career expert at Monster told Mic. But also using vague terms, like saying you are a "hard worker," is too obvious and should instead be demonstrated in your resume by showing how your hard work allowed you to achieve specific goals.

Of course, being a "team player" who is "results driven" isn't necessarily a bad thing, but it doesn't tell the recruiter what its like to work with you. "Hiring managers prefer strong action words that can be used to define specific experience, skills and accomplishments," Rosemary Haefner, vice president of human resources at CareerBuilder said in a blog post. "Subjective terms and clichés are seen as negative, because they don't convey real information... don't say you are 'results-driven;' show the employer your actual results."

Applicants must compete against a flood of other job seekers through a single resume, which is why generic buzzwords can be such a problem. And while not necessarily harmful, saying you have "excellent leadership skills" certainly won't get you to the top of the heap.

Instead of leaning on overused phrases, think about only using actionable words or phrases that show the recruiter what you can do, versus just telling them. Rather than using the phrase "led a project," for example, try a stronger verb like "executed," as the Muse suggests — or better yet, get even more specific by saying something like: "executed five deals that resulted in $600,000 additional revenue for the year." Then give specific examples of how you executed the project through data on growth or a short description.

In addition to content, presentation is vital to catching an employer's eye: "I once came across a seven-page resume," Salemi recalled. "You should be able to succinctly display your credentials on one or two pages, so avoid writing a resume that is too lengthy."

In short: Put yourself in the employer's position and use only that language that will help them better understand what you can offer. Don't just provide a random list of your qualities. And although a graphic designer's resume may look different from an accountant's, for example, there are a few standard terms and phrases that should never grace a CV, cover letter or resume, no matter your profession. Here are 10 examples.

Just don't. Cute jargon or terms that you think are edgy are more likely to produce an eye roll than a thumbs-up by a hiring manager, Salemi said. "Saying you are a ninja, or spelling skills with a 'z' at the end sends a red flag that you aren't professional, regardless of whether you are applying at a more relaxed company or not," she remarked.

Resist the urge to "ninja" your way through your resume and be specific about the qualities that make you a "boss." This could mean you "have been praised for providing helpful and constructive feedback" or "have been successful at negotiating difficult situations," which reflect your "rock star" traits. Don't forget to describe the constructive feedback you provided or what you negotiated effectively, as well.

Unless you are a dog applying for a job, you should never, ever use the term "best of breed" on your resume, Business Insider posits. Aside from offering zero information about who you are and what you can do, the term is like hearing nails on a chalkboard for employers. A CareerBuilder survey found it to be the most annoying term on a resume, which might be because the term is ambiguous — and says nothing about what makes you special.

If you are trying to express the fact that you stand out from the competition, use examples by naming awards you have won, any special distinctions you have earned and some sort of quantifiable metric that proves your capabilities. For example, you could include that you have ranked in the top 10% of salespeople at your company — or that because of your good work, you were recently asked to share best practices with your coworkers. Finally, try illustrating why you are top dog through phrases like "improved" or "created," Forbes suggested, and be clear on what you "created" or "improved" too.

Telling employers things they already know like "salary negotiable" or "references available upon request" is a waste of time and makes it look as though you added the term because you ran out of things to say on your resume, Monster said. Don't revise either of these terms, but instead scrap them altogether.

Save your salary negotiation skills for actual negotiation time, which won't occur immediately. Also, the recruiter will eventually request those references so plan ahead with a list of at least three people you can present (upon request). Here is Mic's guide to getting the perfect job recommendation.

The hiring manager knows your objective is to score this job so including an "objective" on your resume is just taking up space, Monster said. "Again, this term dates you and will make the hiring manager think you are stuck in 1997 and not 2017," Salemi said.

If you can't part with the idea of the "objective" on your resume, consider writing a personal branding statement instead, Brazen said. The statement should include why you should be hired, your expertise level and the values that set you apart from the competition.

Yawn. Phrases like "oversaw," "responsible for," and "handled" basically tells the employer you just did your job, but nothing spectacular, Monster noted. Banish any words that regurgitate what you did on a day-to-day basis in a way that sounds like drudgery. For instance, the same two employees could be responsible for processing paychecks — but one might stand out more if he or she can express that in a way that shows they tackled the task with gusto and made sure everyone was paid on time, say, with phrases like "accelerated" or "revamped the process."

Instead of saying what you were supposed to do, include what you actually did such as "launched" a new product or service or "improved" a process. Using the paycheck processing example, you could say "expertly processed employee paychecks one day earlier than required to ensure smooth delivery."

Avoid including obvious traits (like that you are "detail oriented") that should be displayed by any candidate. Also falling under this umbrella includes: "hard worker," "problem solver," "good communicator," "self-motivated," and "proactive." These are red flag words because aside from telling the employer nothing special about you, they make it look like you think "hard work" or being able to "solve problems" are the only skills you bring to the company.

Consider what will set you above the rest because it's a given that you will be hired to solve problems, be proactive and be self-motivated. Select words or phrases that address your skills directly like: "successfully edited seven articles a day with 100% accuracy" or " convincingly communicated new pricing structure to the client, which resulted in the client signing up for five additional products."

It happens — gaps in your employment history can happen to nearly any professional, whether you take time off to care for a sick relative or can't find work in your field. However, pointing this out glaringly to a prospective employer isn't going to do you any favors, because it just draws the recruiter's attention to that detail while you aren't there to explain why.

"If you have a gap in employment, don't include 'unemployed' in the resume but instead just list the dates and places you've worked," Salemi commented. "The time gap may come up during the interview and you can use that opportunity to discuss what you were doing." If you have a significant job gap, forgo putting the resume in chronological order and stay result-focused on the jobs you include, Fast Company advised. Here's Mic's guide to creating a "skills-based" resume — which avoids making gaps in employment so obvious.

More redundancy on your resume can make a recruiter's eyes glaze over. "Think of your resume as a news story and you want just the important facts that are going to pop," Salemi said. You don't need superfluous or given information. So when listing your phone number and email address you don't need to spell out the words "phone" or "email" because the number and address is apparent, as Business Insider points out.

Did you catch that? If you didn't see that typo, you likely need to review your resume ASAP. "Reviewing for typos and grammatical errors should be a given," Salemi said. "Never send a resume that hasn't been reviewed by a friend or colleague." Even though everyone encounters a typo and a grammatical error in their lifetime, including one on a bid for a job conveys that you are not professional or "detail-oriented." So review, and review again before sending.

While a tiny typo may not be the kiss of death, if you hit send and then notice a seriously embarrassing spelling error or mistake, Payscale advised, don't go nuts trying to explain your errors — but do resend. Simply apologize and state that you updated your resume and had sent over the wrong version.

The term "return on investment" isn't always a deal-breaker, per se, but just throwing in a bunch of acronyms without saying what they are can be annoying to a recruiter. In some cases it may seem like you're using the acronym just to give the appearance of knowing industry jargon, but just ends up confusing the human resources professional wading through resumes.

If you must use an acronym, spell out what it means first and then add the abbreviated version in parentheses, as Business Insider suggests. That way, the recruiter can quickly understand what you mean.