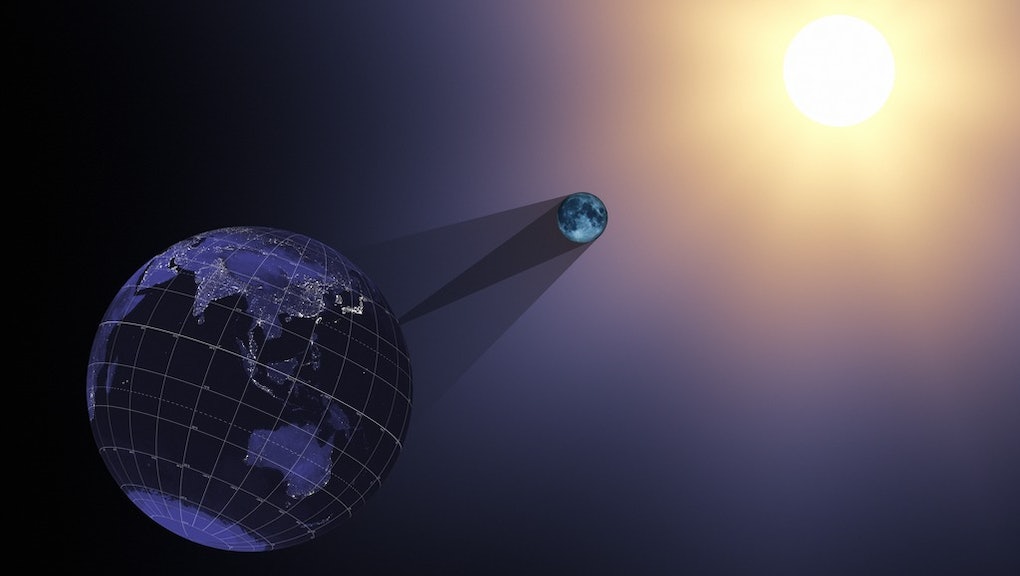 This summer, Americans will get the rare chance to see a total solar eclipse

Americans will have the rare opportunity to see a total solar eclipse this summer. But in case you're curious what that might look like from space, NASA has depicted it in an animation.

Though solar eclipses happen roughly every six months, this one will be the first in nearly 40 years to have its shadow pass through U.S. mainland, according to NASA. In fact, scientists predict that the eclipse will be the first one since 1918 to cross the U.S. from coast to coast — meaning that it can be seen across North America.

"Most people never get to see a total solar eclipse, so this is an amazing opportunity for Americans," Angela Speck, a researcher at the University of Missouri, told Space.com.

Anyone in the continental U.S. should mark their calendars for a day in the outdoors: The total solar eclipse will happen on Aug. 21, 2017.

A total solar eclipse is when the moon, sun and earth happen to line up, causing the moon to cast a shadow onto our planet. For several minutes, it will reveal "the atmosphere's tangle of streamers and loops," along with other uncommon phenomena, according to Space.com.

The disappearance of the body of the sun can cause the the temperature to drop. Animals may behave as though it is nighttime, and signals from radio stations can bounce through the atmosphere differently. Observers may be able to view the approaching shadow of the eclipse in the minutes before totality.

How to safely watch the eclipse

A partial solar eclipse will be visible for two to three hours, but looking directly at the sun during this time is dangerous — it could cause irreversible damage to one's eyesight. Only during the eclipse's 2 minute, 40 second "totality" will the sky go dark and reveal bright stars or planets. This phase is when the moon totally blocks the sun.

NASA advises curious viewers to wear "eclipse glasses" to watch the moon align with the sun, and these glasses should only be taken off during totality. It's important to get these glasses from one of the certified manufacturers — "homemade filters or ordinary sunglasses, even very dark ones, are not safe for looking at the sun," NASA writes.

People living within the "path of totality," which is thought to range from Oregon to South Carolina, are given the following instructions on NASA's safety page for the 2017 total eclipse:

Remove your solar filter only when the Moon completely covers the sun’s bright face and it suddenly gets quite dark. Experience totality, then, as soon as the bright sun begins to reappear, replace your solar viewer to glance at the remaining partial phases.

This interactive map has more details on where the total eclipse can be viewed and what that means for safety.