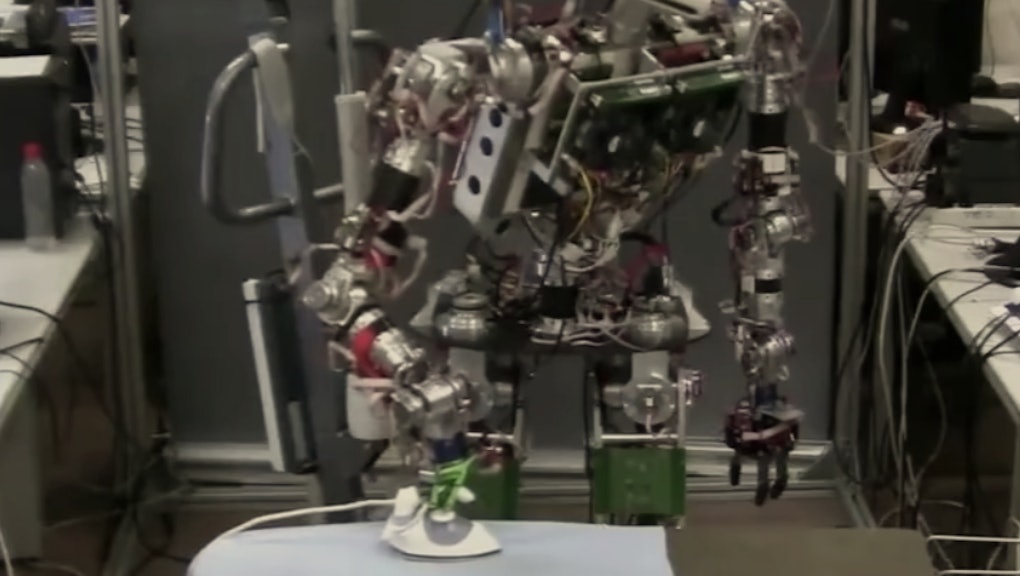 Scientists created a robot that will iron your clothes for you

First there was the Roomba — a disc-shaped robot that wheels across the floor and sucks up dust by itself. Now, an anthropomorphic robot named Teo points to a future where robots could be even better housekeepers.

The 176-pound robot was first made in 2012 at the Carlos III University of Madrid and has since been learning humanlike qualities such as going up stairs or opening doors. These days, it's smart enough to spot wrinkles in our clothes and iron it accordingly.

A camera inside of Teo's head detects the wrinkles on a shirt and then assigns a value from zero to one for every part of it. A zero would represent a sharp edge while a one would represent a flat area. Then Teo reacts appropriately, slowly lowering the iron onto the shirt and smoothing out the problem areas.

“We will have robots like Teo in our homes. It’s just a matter of who does it first,” Juan Victores, one of the researchers behind Teo, told New Scientist.

When will we finally get an extra hand?

Robot helpers are not a new idea. In 2008, scientists at the University of Tokyo unveiled a prototype for a robot named A.R. that could see objects in their 3-D form. A.R. was able to perform basic household chores, such as mopping underneath a table or moving objects. Back then, the scientists estimated that it would be another "decade or two" before it could be mass-produced, according to one video news report.

Elon Musk has also poured funding into a robotic maid that can learn with an artificial mind developed by OpenAI.

“Imagine a Roomba not only cleaning your floor but also doing the dishes, ironing the shirts, cleaning the windows, preparing breakfast," Marc Deisenroth, a reinforcement learning expert at the Imperial College London, told MIT Technology Review.

Though there's no saying when we'll be able to buy any of these robots, the simultaneous research projects point to a future where mundane household chores are perhaps a thing of the past.