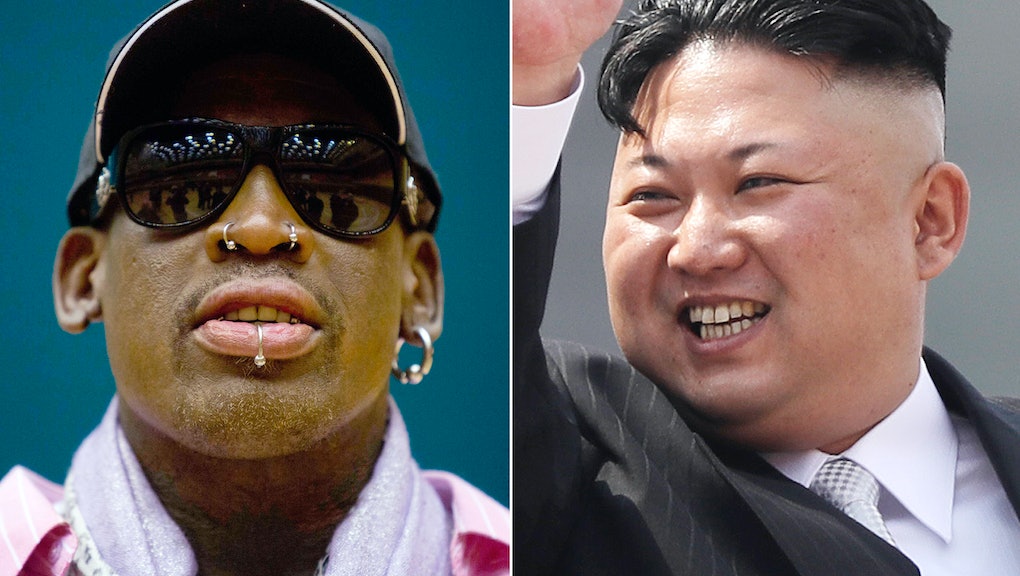 Dennis Rodman and Kim Jong Un: A timeline of their bizarre bromance

The retired NBA Hall of Famer's unusual friendship with North Korean leader Kim Jong Un appears to have helped Rodman see the world from his "buddy" Kim's point of view, but not the other way around.

During an interview Friday with Good Morning America, following his latest return to the United States from North Korea, Rodman shared details about his personal friendship with Kim, who he characterized as a misunderstood individual.

"We always talk," Rodman said of himself and Kim. "We sing karaoke. We ride horses, everything... Those people don't hate us. It's the politics that's the bad thing."

How Rodman became the most famous emissary to North Korea is as unusual as his eccentric rock star life and Kim's brutal and erratic totalitarian exploits as a dictator.

Rodman first thrust himself into the North Korean conversation in February 2013 during a visit to the country with Vice Media.

Vice had previously shot two documentaries in the secretive nation, when founder Shane Smith visited its Hall of Trophies and saw a basketball signed by NBA legend Michael Jordan. Kim's father, Kim Jong Il, was a huge Chicago Bulls fan. Then-Secretary of State Madeline Albright gave the ball to the elder Kim during her visit to North Korea in 2000.

Kim Jong Il's love of the Bulls was passed onto his son, who invited Jordan to visit his country along with Vice, according to the New York Times. When Jordan inevitably declined, Rodman went instead, with a Vice film crew in tow.

"Perhaps now is the time for the NBA has-been to practice some real basketball diplomacy and call up his so-called friend for a favor," Thanh wrote.

Rodman responded by tweeting a request for Kim to set Bae free.

Despite his request, North Korea continued detaining Bae along with another American prisoner, Todd Miller. Both weren't released until Nov. 8, 2014. That didn't stop Rodman from visiting the country a second time in September 2013, when he met Kim's daughter, Ju Ae, and described her father as "an awesome guy."

In January 2014, Rodman brought some of his ex-NBA buddies with him to North Korea to play an exhibition game celebrating Kim's Jan. 8 birthday. The visit got the would-be diplomat in hot water with American journalists.

Rodman appeared intoxicated during a Jan. 7, 2014 satellite interview with CNN's Chris Cuomo when he lashed out at the host for criticizing his visit.

A day later, Rodman's pick-up game commenced, concluding with an unforgettable birthday serenade for his "buddy."

Rodman returned to North Korea in January, spending a week in the country while Warmbier and another American, Kim Dong-chul, were still imprisoned there.

Rodman never articulated the purpose of his visit, but his agent Darren Prince told reporters diplomacy was one of Rodman's hopeful outcomes.

Rodman's latest trip to North Korea came on June 13, the same day the country released Warmbier back to the U.S. in a coma. Warmbier died less than a week later, which Rodman said he regrets.

"I was just so happy he got released," he told Good Morning America's Michael Strahan. "I give all the prayer and love to his family. But I didn't know he was sick."