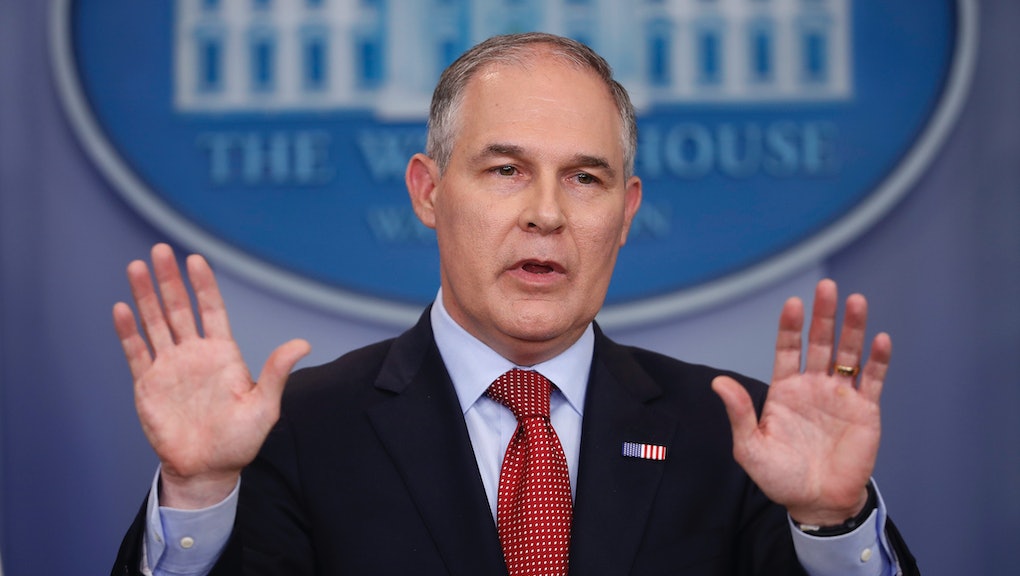 On Tuesday, the Environmental Protection Agency and the Army Corps of Engineers released a joint proposal to repeal the 2015 Clean Water Rule, an environmental protection law originally put in place in 1972 as the Clean Water Act, but codified by President Barack Obama in his second term.

The potential repeal could mark a success for President Donald Trump, who promised to repeal the rule during the 2016 presidential campaign. However, it could also spell disaster for all Americans who enjoy drinkable tap water.

"If you don't think twice about drinking water from the tap, you're benefiting from the clean water rule," Jamie Henn, cofounder of 350.org, a nonprofit fighting climate change, said in an interview. "These are common sense regulations that help protect the environment, our safety and public health."

The Clean Water Rule has a long and very strange history in the United States government. As Dalal Aboulhosn, deputy legislative director for Land and Water at the Sierra Club explained, the act first passed with bipartisan support in 1972. However, when it finally landed on President Richard Nixon’s desk he swiftly vetoed it. But, both chambers of the congress came together and overrode that veto to get the Clean Water Act to become the law of the land.

"That’s kind of amazing now to think, but that was only about 45 years ago," Aboulhosn said. "This would not happen today."

However, over the last decade, the rules of what exactly constitutes "waters" in the United States has been called into question. In a 2006 Supreme Court ruling Justice Scalia quoted Webster’s New International Dictionary, Second Edition, which was published in 1934, pointing out that the definition of waters "does not include channels through which water flows intermittently or ephemerally, or channels that periodically provide drainage for rainfall."

And that’s how we got to the announcement of the potential repeal today, because Trump’s administration plans to use this outdated definition Scalia used to write a new rule. And if they succeed they will "whittle away protections for a lot of waterways including the drinking water sources of 117 million Americans," according to Aboulhosn. "That’s one in three Americans, and we are going to put their water at risk."

The way it could potentially harm average citizens is by allowing "corporations start dumping more chemicals, pesticides, coal ash and other dangerous materials into our waterways, stuff that will ultimately end up in our children's drinking water and our rivers, streams and lakes," Henn described. This could happen if wetlands, rivers and streams that flow only during rainy seasons and other smaller bodies of water are no longer protected.

And the idea that these waterways aren't important bodies of water goes against the report the EPA itself put out in 2015 supporting the Clean Water Rule.

The report, which reviewed more than 1,200 peer-reviewed publications, stated that literature "unequivocally" showed streams, regardless of their size or frequency of flow, are connected to downstream waters and strongly influence their function.

"We learn in middle school that all water is connected and that the upstream waters will greatly affect the downstream waters," Aboulhosn said. "There are many wetlands and streams and other bodies of water that feed those. Their health really is important to the health of those larger bodies of water."

Moreover, she noted, beyond taking into account thousands of peer-reviewed studies, the Obama administration also held more than 400 stakeholder meetings and offered a 90 day comment window to citizens, which was extended twice to be over 180 days. Trump’s team is currently offering a 30 day comment window for Americans to voice their opinion.